What Should Illinois Legislators Do Now Since They Cannot Break a Constitutional Contract with Retirees and Public Employees?

“…The General Assembly may find itself in crisis, but it is a crisis which other public pension systems managed to avoid and, as reflected in the SEC order, it is a crisis for which the General Assembly itself is largely responsible. Moreover, no possible claim can be made that no less drastic measures were available when balancing pension obligations with other State expenditures became problematic. One alternative, identified at the hearing on Public Act 98-599, would have been to adopt a new schedule for amortizing the unfunded liabilities. The General Assembly could also have sought additional tax revenue. While it did pass a temporary income tax increase, it allowed the increased rate to lapse to a lower rate even as pension funding was being debated and litigated.

“That the State did not select the least drastic means of addressing its financial difficulties is reinforced by the legislative history. As noted earlier in this opinion, the chief sponsor of the legislation stated candidly that other alternatives were available. Public Act 98-599 was in no sense a last resort. Rather, it was an expedient to break a political stalemate…” (In re PENSION REFORM LITIGATION (Doris Heaton et al., Appellees, v. Pat Quinn, Governor, State of Illinois, et al., Appellants) Opinion filed May 8, 2015, JUSTICE KARMEIER delivered the judgment of the court, with opinion. Chief Justice Garman and Justices Freeman, Thomas, Kilbride, Burke, and Theis concurred in the judgment and opinion).

What some of us have been saying for a very long time:

The state’s regressive tax rate is what few legislators want to confront. Politicians, the Civic Committee, Civic Federation, Illinois Policy Institute, the Chicago Sun-Times, the Chicago Tribune, Crain's Business, and the general news media have capitalized on a mostly vulnerable public by calling for radical pension reform as the solutions for the budget problems in Illinois. They were (and will continue to be) diversionary, scapegoating tactics that have allowed policymakers to escape their legal and ethical responsibilities.

“At the core of the budget ‘crisis’ facing [Illinois] is [its] regressive state tax structure… That is, low-and-middle-income families pay a greater share of their income in taxes than the wealthy… [A regressive tax] disproportionately impacts low-income people because, unlike the wealthy, [low-income people] are forced to spend a majority of their income purchasing basic needs that are subject to sales taxes” (United for a Fair Economy).

Illinois income tax uses a single-rate structure that results in low-income wage earners paying more taxes than the wealthy. Illinois is among 10 states in the nation with the highest taxes paid by its poorest citizens at 13 percent (The Institute on Taxation and Economic Policy).

Pass a graduated rate income tax like the majority of states in this country. The state needs a tax rate that is “efficient with minimal impact on the economic decisions that taxpayers have to make” (Center for Tax and Budget Accountability), one that captures increased revenues in times of economic growth, one that maintains revenue collections during poor economic times, one that is simple and not liable to inconspicuous error, one that is transparent and builds trust with the state’s government officials (Center for Tax and Budget Accountability), and one that helps 99 percent of the state’s population.

Focus on why the State of Illinois cannot obtain more revenue. Besides federal sources of income, the state uses only 11 sources of revenue: personal income tax (but note Illinois was tied for the fourth lowest individual tax rate on households in the top income bracket), corporate income tax (note extortionate tax breaks given to many Illinois corporations!), sales tax (Illinois does not tax services like most other states for another significant source of revenue), corporate franchise tax and fees, public utility taxes, vehicle use tax, inheritance tax, insurance taxes and fees, cigarette taxes, liquor taxes and other miscellaneous (or rather unsubstantial) tax sources (Commission on Government Forecasting and Accountability).


“A majority of states apply their sales tax to less than one-third of 168 potentially-taxable services… [States that do not tax services, such as Illinois], could increase [its] sales tax revenue by more than one-third if [it] taxed services purchased by households comprehensively.” Illinois is one of five states with sales taxes on fewer than 20 services (The Center on Budget and Policy Priorities).

Expand the state’s tax base. A broader-based taxation system that would provide a decrease in taxes for low-income and many middle-income families. Taxing services alone “would generate enough revenue to stabilize the General Revenue Fund and prevent structural deficits that lead to cuts in basic needs and social service programs” (Center for Tax and Budget Accountability). 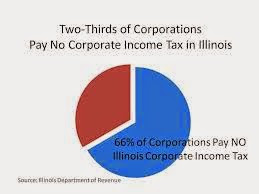 Increase taxation on the wealthy: Illinois is in the top 10 of regressive state tax systems where the wealthiest taxpayers do not pay as much of their incomes in taxes as the poorest and middle-income wage earners. “Since the rich are able to save a much larger share of their incomes than middle-income families – and since the poor [can] rarely save at all – the taxes are inherently regressive” (The Institute on Taxation and Economic Policy).

Eliminate “Edge Tax Credits” and other tax loopholes for large corporations in Illinois.

Revamp the flawed Pension Ramp: “Starting in 1995, yet another funding plan was implemented by the General Assembly. This one called for the legislature to contribute sufficient funds each year to ensure that its contributions, along with the contributions by or on behalf of members and other income, would meet the cost of maintaining and administering the respective retirement systems on a 90% funded basis in accordance with actuarial recommendations by the end of the 2045 fiscal year. 40 ILCS 5/2-124, 14-131, 15-155, 16-158, 18-131 (West 2012). That plan, however, contained inherent shortcomings which were aggravated by a phased-in 'ramp period' and decisions by the legislature to lower its contributions in 2006 and 2007. As a result, the plan failed to control the State’s growing pension burden. To the contrary, the SEC recently pointed out:

“‘The Statutory Funding Plan’s contribution schedule increased the unfunded liability, underfunded the State’s pension obligations, and deferred pension funding. The resulting underfunding of the pension systems (Structural Underfunding) enabled the State to shift the burden associated with its pension costs to the future and, as a result, created significant financial stress and risks for the State.’ SEC order, at 3. That the funding plan would operate in this way did not catch the State off guard. In entering a cease-and-desist order against the State in connection with misrepresentations made by the State with respect to bonds sold to help cover pension expenses, the SEC noted that the State understood the adverse implications of its strategy for the State-funded pension systems and for the financial health of the State. Id. at 10. According to the SEC, the amount of the increase in the State’s unfunded liability over the period between 1996 and 2010 was $57 billion. Id. at 4.5 The SEC order found that ‘[t]he State’s insufficient contributions under the Statutory Funding Plan were the primary driver of this increase, outweighing other causal factors, such as market performance and changes in benefits.’” (Emphasis added.) Id. at 4 (In re PENSION REFORM LITIGATION (Doris Heaton et al., Appellees, v. Pat Quinn, Governor, State of Illinois, et al., Appellants) Opinion filed May 8, 2015, JUSTICE KARMEIER delivered the judgment of the court, with opinion. Chief Justice Garman and Justices Freeman, Thomas, Kilbride, Burke, and Theis concurred in the judgment and opinion).

Also from the Illinois Supreme Court Ruling: “Senator Hutchinson: Would another alternative be the proposal that the Center for Tax and Budget Accountability outlined before the conference committee, which would have re-amortized the current unfunded liabilities to a new gradual [level] dollar payment schedule to achieve well over eighty percent by 2059? Senator Raoul: Yes. So that—that and many other things could have been possible alternatives.”

The current “Pension Ramp” does not work for the five public pension systems. The “Ramp” entails larger payments today as a result of the 1995 funding law – Public Act 88-0593 – to pay the pensions systems what the state owes. There needs to be a required annual payment from the state to the pension systems. The debt needs to be amortized for a longer frame of time (a flat payment) just like a home loan that is amortized; though the initial payment will be difficult in the beginning, over the long term it will become a reduced cost and a smaller percentage of the overall Illinois budget as it is paid off throughout the years.

“Decades of mismanagement and failure to match contributions are the predominant reasons that the state’s pension systems are suffering to the degree that they are today. Years of pension holidays, continually borrowing against the systems without a plan for repayment and a severe economic recession, which caused investments to plummet, further exacerbated the problem” (Senate President John Cullerton).  Thus, there needs to be a required “actuarially-sound” annual payment from the state to the pension systems! Indeed, the State of Illinois has a revenue problem and its policymakers have stolen money for decades from public employees' pensions to hide this fact.

What will state policymakers most likely do instead?
They will consider shifting the state's normal costs to the pension systems to local school districts. They will consider creating a Tier III defined-contribution savings plan for new teachers. They will ignore the fact that current Tier II teachers are contributing too much to their pension plans (even though this will cause serious Social Security problems in the future for these teachers and the State of Illinois!). They will continue to increase the inequities that have existed in Illinois for years (budget cuts across the board for the middle class and poor and more corporate welfare for the wealthy elite). They will continue to blame public employees and retirees for the state's budget problems, often rekindling so-called pension reform discussions, as if the Illinois Supreme Court decision had never happened. They might attempt to repeal the Pension Protection Clause as if the Illinois Supreme Court decision had never happened. They might even attempt to re-negotiate with the public employees' unions again, hoping for another foolish agreement with them, like Senate Bill 2404... In short, it is much easier for liars and thieves among the Illinois General Assembly and their minions to continue the charade of political posturing and scapegoating public employees and retirees then to address the state's revenue and pension debt problems they have created and ignored in Illinois for several decades.