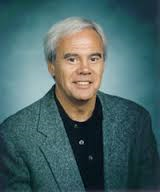 You’ve vanished again, somehow
moved from the seventeenth row,
thirteenth stone in from the road,
snowflakes blown horizontal
across the wide sweep of the dead
while I stumble in cold feet,
cold hands hanging onto the plastic wreath
I intend to clamp to your grave
and tie secure with the thin green threads,
but you’re nowhere to be found, gone,
just as you’d drifted out that black door
on Olmstead Street into twenty below,
jacket open, no hat, no gloves,
only khaki pants and white socks
glimmering above cheap boots
that let any weather in,
only the house of cards left trembling
on the kitchen table
beneath that dim moon of a bulb,
the star-speckled linoleum gleaming
as it creaked, me turning in a circle
as though you were hiding behind me—
expecting the sudden tap on the shoulder,
the sudden hand-brush through my hair—
not believing anyone with such rings and keys
and jangling coins
could so quickly, so silently, disappear.

My mother catalogues the wrongs

the world’s done her,
the cake her parents ate
while she and her eight brothers
and sisters went hungry,
the long nights in St. John’s Alley
where the man knocked on the door
of her fifteen years,
so many months spent looking out
windows, afraid
to leave the house, afraid to buy
a tomato, a cucumber at Rosa’s,
afraid to light a candle in
St. Bernard’s Church.
The Alzheimer’s that runs in her family,
her sister Verda, then Dorothy, then
Eleanor and Joey,
and she knows she’s next as she forgets
the roast beef in the oven,
stumbles over my name, my brother’s, tells
me he’s got a bald patch
in the back of his head just like her father’s,
tells me the man who has been dead thirty years
helped her clean the cupboard last night,
that he polished the glasses with his breath
the way he used to,
clattered the forks, knives, and spoons
into the tray
while the radio played Your cheating heart
will tell on you,
the shadow of the woman with the red dress
flickering across my mother’s eyes,
but before she can speak, the image is gone.
Mother, I say, lie down, get comfortable,
and she tells me she doesn’t belong
in a hospital,
making me tell her she’s not even as she
looks around
and asks what all the women in white
are doing here,
why do they come in at night and wake her
for pills,
where’s Peppy, her dog, where’s her purse,
my mother’s face ten again, waiting for
the belt, the walk
to school with no winter coat, kneeling
on the thick, green carpet and saying,
God, it’s cold, please wrap me up,
asking me, her father, her doctor, her son
to take her hand and hold it a moment,
Not to let go, Not to let go.

Posted by gbrown at 7:24 AM No comments: 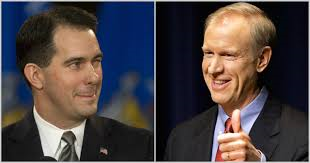 “…In a little over four years as governor, [Scott Walker] has obliterated moderate Republicans and mainstream conservatism in a state where both once flourished. In their place has evolved a win-at-any-cost new politics built around Walker, who has ripped up election laws, governance, and personal relationships so thoroughly that Wisconsin’s largest newspaper, the Milwaukee Journal Sentinel, calls him ‘the most divisive Wisconsin politician in living memory’—in a state that was represented by Joe McCarthy in the Senate as recently as 1957. Walker has not turned Wisconsin ‘completely red,’ but he has conquered foes in both parties and remade the political infrastructure to the point that he can now boast to compromise-averse Republicans: ‘If our reforms can work in a blue state like Wisconsin, they can work anywhere in America.’

“But which reforms? The changes that Walker trumpets on the campaign trail—assaults on public employees, public education, public services, and unions; the rejection of federal mandates; and the remaking of economic-development programs and tax schemes to distribute wealth upward—haven’t worked any better than the failed austerity schemes in Europe. Wisconsin trails far behind neighboring states like Minnesota and the rest of the nation when it comes to job creation and economic vitality. However, the ‘reforms’ that matter most to Walker—those that enhance his personal power and electability—have been successful enough to make him a serious contender for the Republican nomination…

“﻿Walker has spent a lifetime preparing for this presidential campaign, and everything about his record says that he will do whatever it takes to win. If he were to secure the nomination and win the presidency—and arrive in Washington with a GOP-controlled Congress—he would no longer be restructuring the politics of a medium-size state to his advantage; he would be restructuring the federal government and the nation’s future. The prospect excites Limbaugh, just as it terrifies the Wisconsinites who have battled Walker the longest and hardest. If this man is elected president, we will be done with elections as we know them. We will enter a new age of winner-take-all politics, where ruthlessly ambitious tacticians assemble billionaire donors, cultivate an echo-chamber media, shove aside idealists, reimagine parties as reflections of themselves, and remake government as a vessel to be filled by the highest bidder. Perhaps we’ve already passed the tipping point, and Scott Walker’s candidacy simply confirms the crisis he exemplifies. Or perhaps it’s the fight against Walkerism that will finally awaken us.”

For the complete article, Get Ready for Scott Walker… and the Ruthless Politics of Walkerism by John Nichols, click here.

Posted by gbrown at 4:40 PM No comments: 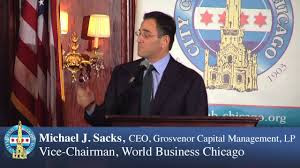 “When officers of the Illinois teachers’ pension system opted to put more than $1 billion under the control of a single financial firm, Grosvenor Capital Management, they touted the arrangement as a step toward greater efficiency: Grosvenor would be entrusted to manage a larger slice of the state’s hedge fund investments, a part of the portfolio that had previously been managed by a competing firm.

“But the deal, blessed by Illinois pension officials in late 2013, was distinguished by more than the simple consolidation of two managers into one. Grosvenor is run by Democratic Party financier Michael Sacks, a major campaign contributor to Chicago Mayor Rahm Emanuel and a prodigious fundraiser for President Barack Obama.

“The decision to retain Grosvenor and transfer more state pension funds to the firm was ratified by a board composed of officials appointed by then-Illinois Gov. Pat Quinn, a Democrat who had been the beneficiary of substantial campaign contributions from a political action committee, or PAC, that was partially run and financed by Sacks’ wife, Cari Sacks. Though Michael and Cari Sacks had since 1990 contributed to the Personal PAC, which finances candidates who favor abortion rights, the couple’s contributions more than quadrupled during Quinn’s tenure in office compared to the previous decade.

Grosvenor Capital Management Holdings, Lllp | FindTheCompany
“In short, as the Sackses escalated their giving to a PAC that supported Quinn, his appointees signed off on shifting hundreds of millions of dollars to a financial management company run by none other than Michael Sacks. That decision was made even as Grosvenor was underperforming less expensive stock index funds. The pension system paid Grosvenor at least $3.2 million in fees in the year after the deal, state records indicate.

“This all unfolded despite federal rules designed to prevent campaign contributions from influencing how governments manage their money. The so-called pay-to-play rules explicitly bar financial executives who manage pension money from making campaign contributions to public officials who have authority over pension investments.

“Unlike Illinois’ own anti-corruption statute, the federal rules include so-called anti-circumvention provisions that seek to prevent end-runs around the law: Executives who are considered ‘covered associates’ under the rule cannot funnel campaign contributions through family members. Third-party groups such as PACs also cannot be used as conduits.

“International Business Times described the outlines of the deal to Greg Nowak, an attorney at Pepper Hamilton, a Philadelphia law firm that counsels corporations on compliance with financial regulations. ‘It raises the perception that the covered associate is attempting to circumvent the SEC's pay-to-play rule,’ he said, referring to the federal Securities and Exchange Commission. He added: ‘I would advise against campaign contributions of this type’…

“The Illinois Campaign for Political Reform’s David Melton said the mix of political influence, money and pension investments spotlights a wider problem in Illinois. ‘This appears to be another unfortunate example of the corrupting influence of big money and unlimited contributions in the politics of our state,’ he told IB Times.

“‘Pay-to-play’ should not be the basis for awarding state contracts.”