How playing an instrument benefits your brain - Anita Collins:


Playing a Musical Instrument as a Protective Factor against Dementia and Cognitive Impairment: A Population-Based Twin Study: 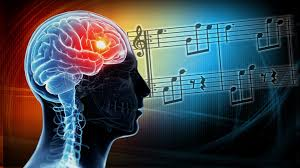 “Playing and learning a musical instrument has been shown to benefit cognitive development and health during younger life, but what about learning and playing an instrument as an adult?

“Until now, the effect of playing an instrument as a leisure activity and dementia risk has not been thoroughly investigated… [R]esearch published in the International Journal of Alzheimer’s Disease suggests that playing a musical instrument during adulthood is significantly associated with reduced risk of cognitive impairment and dementia.

“The researcher’s analyzed data from 157 sets of twin’s participating in a Swedish study, known as HARMONY. This study is unique as it only recruited for sets of twins where one twin had been diagnosed with a form of dementia or a cognitive impairment, and the other twin had not. Conducting the research on twins allowed the researchers to control for a large number of genetic and environmental factors. This meant the research could determine risk factors that were unique to the twin with dementia, as well as protective factors exclusive to the healthy twin.

“The focus of this paper was to explore whether playing a musical instrument in later life was a protective factor for dementia. All participants completed a lifestyle questionnaire, which included questions about their experience of playing a musical instrument. These questions included whether the participant played new and/or familiar music, their frequency of playing, and whether she/he was still playing at time of assessment or stopped playing at a specific age. It is important to note that none of the participants identified themselves as a professional musician.

“Of the 157 sets of twins (i.e. 314 individuals), 31 individuals identified that they played a musical instrument. When they delved further into these 31 musicians, 27 were found to be cognitively healthy, while four had dementia. So when the researchers analyzed this specific group of twins (controlling for gender, education, and physical activity) they found that those participants who played an instrument in older adulthood had a 64% lower likelihood of developing a cognitive impairment or dementia.

“This result provides more evidence that learning a new hobby (such as a musical instrument) may be able to stimulate your brain and reduce your risk of dementia.”

Posted by gbrown at 3:19 PM No comments: 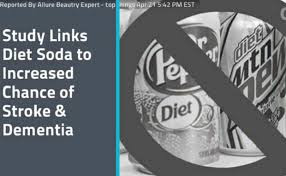 Background and Purpose— Sugar and artificially-sweetened beverage intake have been linked to cardio-metabolic risk factors, which increase the risk of cerebrovascular disease and dementia. We examined whether sugar- or artificially sweetened beverage consumption was associated with the prospective risks of incident stroke or dementia in the community-based Framingham Heart Study Offspring cohort.

Results— After adjustments for age, sex, education (for analysis of dementia), caloric intake, diet quality, physical activity, and smoking, higher recent and higher cumulative intake of artificially sweetened soft drinks were associated with an increased risk of ischemic stroke, all-cause dementia, and Alzheimer’s disease dementia. When comparing daily cumulative intake to 0 per week (reference), the hazard ratios were 2.96 (95% confidence interval, 1.26–6.97) for ischemic stroke and 2.89 (95% confidence interval, 1.18–7.07) for Alzheimer’s disease. Sugar-sweetened beverages were not associated with stroke or dementia.

Conclusions— Artificially-sweetened soft drink consumption was associated with a higher risk of stroke and dementia.

Posted by gbrown at 5:40 AM No comments: 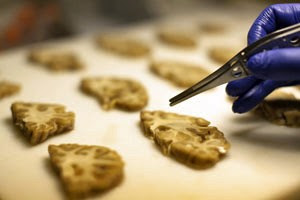 
“The pathologies (damage) in the brain that stroke, Alzheimer’s disease and other neurological conditions cause in older adults only partially explain the memory loss, reduced reasoning ability and other cognitive impairments that result from these conditions. Little is known about why the effects of brain pathology vary among people who develop it.


“Now researchers have discovered two genes, known as UNC5C and ENC1, that are associated with aging individuals having better memory and brain function than would be expected, given the amount of pathologies that accumulated in their brains. They reported their findings in an article published today [April 25, 2017] in the journal PLOS Medicine.


“‘Most of the cognitive loss that we experience in older age remains unexplained. Certain individuals are very resistant to the pathologies of the aging brain, while others may be particularly vulnerable,’ says study senior investigator David Bennett, MD, who directs the Rush Alzheimer’s Disease Center.


“These potentially damaging pathologies include the buildup of harmful proteins known as amyloid plaques and neurofibrillary tangles that occur in Alzheimer’s disease; the protein deposits known as Lewy bodies that accompany Parkinson’s disease and Lewy body dementia; and the death of massive amounts of brain cells caused by stroke.


“Identifying genes that contribute to resistance to these and other brain pathologies could provide researchers with new targets for developing medications that would enhance the brains of aging adults to resist Alzheimer’s disease and other neurological conditions, Bennett says.


“The researchers drew on a vast trove of data, including genetic analyses, generated by two ongoing long-term studies of aging based at Rush University Medical Center, which includes study participants’ donation of their brains for research after their death. These participants were tested annually to measure their cognitive function, allowing for a comparison of the decrease in cognitive function with the development of any pathology found when their brains were autopsied after their deaths.


“Using this information for 979 participants, the researchers assessed how much each person’s thinking ability withstood the development of memory loss despite the accumulation of brain pathology – in other words, how resilient they were to pathology. Then they conducted a complex, multiple step analysis ‘to identify segments of the human genome (i.e, genes) that help us to maintain cognitive function in the face of advancing age and disease,’ explains study senior investigator Philip De Jager, MD, PhD, professor of neurology at Columbia University Medical Center.


“The innovative approach combined an analysis of the human genome – the complete set of genes in a person — with an evaluation of the epigenome — changes to DNA that helps determine which genes can be ‘read’ so its protein is made. Epigenome in part reflects how our brain responds to life experiences and exposures to environmental factors.


“The analysis identified UNC5C and ENC1 as being associated with cognitive resilience. In addition, the researchers found that TMEM106B — a gene whose presence previously had been identified as possibly protecting against age-related frontotemporal lobar degeneration — also may play a role in brain resilience.


“‘These genes should be studied further to expand our understanding of molecular mechanisms relevant to cognitive resilience that could be translated into prognostic and therapeutic tools for dementia prevention,’ the researchers write in the paper’s summary.


“The work was supported by grants from the National Institute on Aging. The investigators are indebted to the study participants.”

This article is from Rush University Medical Center, Chicago, Illinois

This Sickening Reason Is Why You Should Never Buy Food from Jimmy John's Again! by Lara Starr 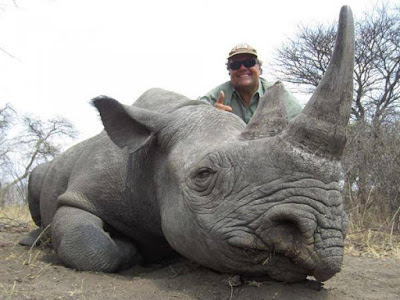 “Some companies should be BOYCOTTED for various reasons. JIMMY JOHN'S is ABSOLUTELY one of them. And no, this isn’t about many of the issues people are always talking about when it comes to working for Jimmy John’s either, like the fact that they force their sick employees to work for fear of losing their jobs. And if they get fired or quit, they’re not allowed to work at any sandwich shop or restaurant within a three mile radius of a Jimmy John’s either… (Read about all that here).


“No. Today we’re talking about the owner, Jimmy John Liautaud himself, who is a complete… psychopath who loves to spend your sandwich money on killing endangered animals in Africa.


“Jimmy comes to South Africa (and sometimes Namibia or Botswana) quite frequently. When he does, he easily drops more than a quarter million dollars on a single trophy hunt. Like on this trip, when he butchered an EXTREMELY ENDANGERED female BLACK RHINO. She was the very last black rhino in the Mangetti National Park. Buying her just to kill her and take her horn (as a trophy) cost Jimmy over $350,000 dollars. He doesn’t seem to mind spending that much though does he? Just look how happy he is!


“…So how does it work? Well, usually the animals are lured from a national park on to private property. Trophy hunters will leave out bait, play the sounds of other animals to lure them in, or a few other tactics to find their animal victims. Canned hunting is even worse. It is the ‘shooting fish in a barrel’ version of trophy hunting. The animals are often hand raised so they are tame and don’t run away. They leave food out for them one day, then some coward creeps up and shoots them with a high powered bow or rifle. Sometimes they don’t even have to creep. Sometimes they just shoot them from the back of a truck then go back to drinking their Gin & Tonic like it was just a bit of harmless fun…


“Part of the infuriating thing about this behavior is the fact that people like Jimmy have the audacity to call themselves ‘conservationists’ and claim that their trophy hunts benefit conservation and local communities. Real conservationists give their time and money without insisting on killing something in return…


“Jimmy is absolutely full of crap when he claims that trophy hunting funds conservation, feeds starving villages or keeps the ecosystem in balance by keeping animal numbers down. Those are 100% lies perpetuated by the trophy hunting industry, and they’re easily disproved.


“It is well known here that trophy hunting funds less than 2% of our conservation efforts in South Africa. Normal tourism (as in shooting animals with cameras only) raises over 15x more money for conservation than any form of trophy hunting in Africa does, without brutally killing anything. Most people who do trophy or canned hunting like this are only fattening the wallets of wealthy game farm owners who only care to protect their own animals from poachers coming on their property. This does nothing to protect animals in the ‘wild’ national parks where most endangered animals live.


“As for feeding locals, 9 times out of 10 the meat from a trophy hunt (especially if it’s a large animal) is left in the dirt for the scavengers because they can’t be bothered to move the body or process it. Plus, the locals here don’t eat lions, rhinos or elephants anyway. They eat fish, chicken, pork and beef like most people around the world do...


“Ecosystems need to be better protected, especially fragile ones that are so out of balance due to over hunting, poaching and habitat loss, like the African bush… In case there is some doubt about… conservation, you can read a much more in depth explanation here: The Myth of Trophy Hunting as Conservation” 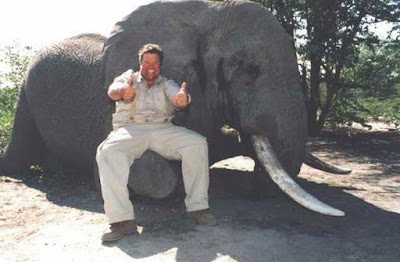 From This Sickening Reason Is Why You Should Never Buy Food from Jimmy John’s Again! by Lara Starr, Journalist, Activist and Researcher