The Illinois Pension Funding Ramp: Why it is highly unlikely the State of Illinois will continue to meet its annual pension contributions 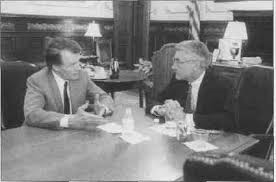 “The outsized unfunded pension liability isn't the cause of Illinois' fiscal problems; rather it's a significant consequence of poorly designed tax policy” --Ralph Martire

“…There's been a longstanding imbalance between revenue growth and service cost growth, which prevents Illinois from sustaining the same level of services from year to year. This creates a real challenge for politicians, because $9 out of $10 the state spends on services goes to education, health care, social services and public safety. Cutting those core services every year is hardly a blueprint for re-election or good public policy.

“Raising taxes always scares politicos, no matter how rational or needed the increase would be. So decision makers consistently chose a third, irresponsible path: using the pension systems like a credit card, diverting revenue that should have funded the normal cost of retirement benefits to instead fund current services.

“This avoided the need for service cuts or distasteful tax increases, while allowing constituents to consume services without paying the full cost thereof in taxes. It became such a political crutch that the practice of borrowing from what was owed the pensions to fund services was codified into law as part of the 1995 pension ‘funding ramp.’

“This ramp so aggressively borrowed against the pensions that it ballooned the unfunded liability from $17 billion in 1994 to $54 billion in 2008 — when the Great Recession hit and financial markets crashed. It accomplished this boondoggle by using an amortization schedule that was so back-loaded it resembled a ski slope, calling for annual payments in excess of $16 billion in out years.

“Now that we know the Illinois Constitution means what it says, the only viable and constitutional solution going forward is replacing the current back-loaded repayment schedule with a longer, level dollar amortization that permits payment of all retirement benefits when due, increases the funded ratio to a point that's considered healthy, and is affordable so that bond rating agencies have confidence payments will be made.

“And Illinois still must raise taxes so it finally has the means to sustain core services without irresponsibly borrowing to pay for them.”

— Ralph Martire is executive director of the Center for Tax and Budget Accountability, a bipartisan fiscal policy think tank.

from Ralph Martire: the prescription to cure what ails Illinois.

·         For decades, Illinois has had a structural deficit. To paper over—without resolving—the fact that the cost of delivering public services from year-to-year grew at a greater rate than revenue did—decision makers opted to borrow against what they owed the pension systems and use that borrowed revenue to fund delivery of public services. This meant that for decades the pension systems—against their will—were lending money to the state’s General Fund to subsidize the cost of delivering current services. This effectively allowed taxpayers to consume public services for over 40 years without having to pay the full cost of those services.

·         In FY1995, the General Assembly passed and Governor Edgar signed P.A. 88-0593, which established what became known as the ‘Pension Ramp.’ The Pension Ramp mandated that the state’s annual pension contributions be made pursuant to a continuing appropriation, and established a repayment schedule for the debt owed to the pension systems which would result in all five systems having 90 percent funded ratios by 2045.

·         Even though P.A. 88-0593 was allegedly designed to repay the debt owed to and resolve the unfunded liability of the pension systems—by law—the legislation continued the practice of borrowing against contributions owed to the pension systems to subsidize the cost of delivering public services for 15 years after passage.

·         During this “15-year phase-in period” the state’s annual contributions were calculated as a percentage of payrolls significantly below the normal cost of funding benefits for current workers each year. This effectively increased the unfunded liabilities of the five pension systems by $24.7 billion.

·         The Blagojevich Administration paid a portion of the state’s pension contribution for FY2003 and all of its FY2004 contribution with debt proceeds from the sale of $10 billion worth of Pension Obligation Bonds (2003 POB). Under this legislation, P.A. 93-0002, the state’s annual contributions to the pension systems were reduced by the annual debt service on the bonds.

·         It would be one thing if all the $10 billion in debt proceeds from the 2003 POB were paid into the pension systems to retire pre-existing pension debt. That would have constituted a refinancing at lower interest rates, something businesses do all the time to save money. In this instance, however, the state incurred debt to pay its current obligations—which had to be repaid over time—ultimately increasing costs to the state, a situation made worse by the reduction in current annual contributions the bill implemented.

·         In 2010, legislators took a new approach to reducing the state’s obligation to repay its debt to the pension systems. Rather than replace the existing Pension Ramp with a rational, attainable payment schedule, they decided to have future workers pay for state government’s past sins by creating a second benefit tier under SB 1946 (Tier II, P.A. 96-0889).

·        This legislation requires new employees who receive lower pension benefits under Tier II, to make contributions to the pension systems that cover more than the cost of their Tier II benefits. In effect, this means new state employees and teachers are assuming part of the state’s obligation to repay pre-existing pension debt—out of their wages. This ultimately reduces the employer contributions required from the state.

·          It is highly unlikely the state will continue to meet its annual pension contributions, given the continued growth in both its contribution payment schedule on the one hand, and the structural deficit on the other.

·         After all the changes in law passed over the prior few years, the remaining payment schedule under the now modified pension ramp is still unattainable. To meet the 90 percent funded ratio target by 2045, annual employer contributions will have to grow by 3 percent every year for the remainder of the funding schedule (FY2013 – FY2045).

·         The debt Illinois incurred to these systems over time subsidized the cost of service delivery to taxpayers. Now the bill is coming due to repay that debt—a debt that allowed all taxpayers to receive core services for decades at a discount. The payment schedule for repaying that debt is both unrealistic and the cause of the fiscal strain that threatens funding for services (CTBA).

Most Recently on the Flawed Pension Funding Ramp:


“Starting in 1995, yet another funding plan was implemented by the General Assembly. This one called for the legislature to contribute sufficient funds each year to ensure that its contributions, along with the contributions by or on behalf of members and other income, would meet the cost of maintaining and administering the respective retirement systems on a 90% funded basis in accordance with actuarial recommendations by the end of the 2045 fiscal year. 40 ILCS 5/2-124, 14-131, 15-155, 16-158, 18-131 (West 2012). That plan, however, contained inherent shortcomings which were aggravated by a phased-in 'ramp period' and decisions by the legislature to lower its contributions in 2006 and 2007. As a result, the plan failed to control the State’s growing pension burden. To the contrary, the SEC recently pointed out:


“‘The Statutory Funding Plan’s contribution schedule increased the unfunded liability, underfunded the State’s pension obligations, and deferred pension funding. The resulting underfunding of the pension systems (Structural Underfunding) enabled the State to shift the burden associated with its pension costs to the future and, as a result, created significant financial stress and risks for the State.’ SEC order, at 3. That the funding plan would operate in this way did not catch the State off guard. In entering a cease-and-desist order against the State in connection with misrepresentations made by the State with respect to bonds sold to help cover pension expenses, the SEC noted that the State understood the adverse implications of its strategy for the State-funded pension systems and for the financial health of the State. Id. at 10. According to the SEC, the amount of the increase in the State’s unfunded liability over the period between 1996 and 2010 was $57 billion. Id. at 4.5 The SEC order found that ‘[t]he State’s insufficient contributions under the Statutory Funding Plan were the primary driver of this increase, outweighing other causal factors, such as market performance and changes in benefits.’” (Emphasis added.) Id. at 4 (In re PENSION REFORM LITIGATION (Doris Heaton et al., Appellees, v. Pat Quinn, Governor, State of Illinois, et al., Appellants) Opinion filed May 8, 2015, JUSTICE KARMEIER delivered the judgment of the court, with opinion. Chief Justice Garman and Justices Freeman, Thomas, Kilbride, Burke, and Theis concurred in the judgment and opinion).
Posted by gbrown at 8:05 AM