“…Nekritz acknowledged that public employees have paid their pension contributions while politicians for decades have not adequately paid the state's employer share. But she said, ‘To [a Chicago Tribune reporter] the most immoral thing that could happen is to say to someone, a 75- or 80-year-old retiree, I'm sorry, the system's broke. I can send you no check. I would rather make the increases in their benefit going forward smaller and know that the system is secure so they know they're going to get a check in the future’” (Lawmaker: Pension plan 'very likely'for veto session).

1.      Reforming the debt that is owed to public pensions and restructuring the state’s unfair revenue system will solve the “broken system” that politicians have created.
2.      Public employees will “get [their] checks in the future.”
3.      So-called “pension reform” or breaking a constitutional contract will end up in court.
4.      Nekritz and other politicians have ignored:

“…The Pension Code sufficiently manifests intent to make pension payments the obligations of the State when due… [T]he Illinois Pension Code Article of each of the five state-funded pension systems contains a provision with sufficient language binding the State to pay pensions even if a system defaults. Each provision states in pertinent part that ‘[t]he payment of the required department contributions, all allowances, annuities, benefits granted under this Article, and all expenses of administration of the system are obligations of the State of Illinois to the extent specified in this Article…’” (Madiar (2011), Is Welching on Public Pension Promises an Option for Illinois? An Analysis of Article XIII, Section 5 of the Illinois Constitution) (link: What happens if the Illinois public pension funds are “on the verge of bankruptcy?).

“The [Pension] Clause stands as a constitutional guarantee that pension recipients will receive their pension payments when due even if a pension fund defaults or is on the verge of default. Any state pension participant placed in such a position would have a cause of action in circuit court to enforce this guarantee and obtain payment directly from the State’s General Fund. A participant need not pursue payment before the Illinois Court of Claims and depend upon the largesse of the General Assembly” (IS WELCHING ON PUBLIC PENSION PROMISES AN OPTION FOR ILLINOIS?
AN ANALYSIS OF ARTICLE XIII, SECTION 5 OF THE ILLINOIS CONSTITUTION by Eric M. Madiar, Chief Legal Counsel to Illinois Senate President John J. Cullerton and Parliamentarian of the Illinois Senate).

“[Moreover,] Pensions will not run out of money… [That] assumes that at a future date, state pensions will just cease and all outstanding financial obligations will come due… Unlike a corporation, a state government cannot go out of business… [Accordingly,] state law empowers TRS (40 ILCS 5/16-158c)… Payment of the required state contributions and of all pensions, retirement annuities, death benefits…, all other benefits…, and all expenses are obligations of the state… The state has waived its sovereign immunity in regard to the teachers’ pension because TRS is a qualified pension plan under the tax-deferred provisions of the IRS code.  Federal law would protect all claims… Pensions [are not] the problem [or] why Illinois has been unable to pay its bills.  The reason is the dramatic fall-off in state revenues over the years, costing the state billions” (Dave Urbanek, TRS, 2011).

“The most immoral thing” currently happening to all citizens of Illinois is the General Assembly’s blatant disregard of the State and U.S. Constitutions.

Teachers in the U.K. “embroiled in a long-running dispute over pay, pensions, working conditions and jobs” 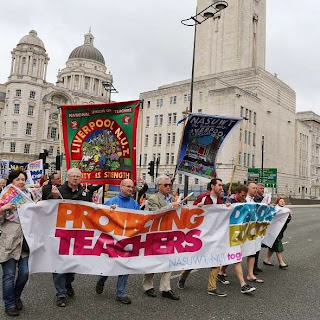 “…Members of the two biggest teachers' unions will strike in parts of England on Tuesday. The action, by members of the National Union of Teachers (NUT) and the National Association of Schoolmasters Union of Women Teachers (NASUWT), will affect schools in Eastern England, the Midlands, and Yorkshire and Humberside. A further strike will be held on October 17 in the North East, Cumbria, London, the South East and South West. The unions are embroiled in a long-running dispute over pay, pensions, working conditions and jobs.

“Chris Keates, general secretary of NASUWT, said: ‘The attacks on teachers are relentless. The reward for their hard work, dedication and commitment has been a vicious assault on their pay, conditions and professionalism. Teachers are angered by the recklessness of the Secretary of State's continuing failure to take seriously their concerns and engage in genuine discussions to address them.’

“The action follows a four-hour strike last week by firefighters in England and Wales over pensions, while postal workers are currently voting on whether to strike over the Government's controversial privatization of the Royal Mail.

“Christine Blower, general secretary of the NUT, said: ‘There can be no doubt left about the feeling of anger towards this Government's treatment of the teaching profession. The Education Secretary should do as his counterparts in Wales have done and enter into meaningful dialogue with the NUT and NASUWT. No teacher takes strike action lightly but the intransigence of this Education Secretary has left teachers with no choice. We cannot stand by and watch our profession be systematically attacked and undermined. There needs to be a change in Government's attitude to teachers and education.’

“A Department for Education spokesman said: ‘It is disappointing that the NUT and NASUWT are striking over the Government's measures to allow heads to pay good teachers more. In a recent poll, 61% of respondents supported linking teachers' pay to performance and 70% either opposed the strikes or believed that teachers should not be allowed to strike at all.’

“The Department for Education added: ‘All strikes will do is disrupt parents' lives, hold back children's education and damage the reputation of the profession.’”


This article is from Teachers and postal staff to strike

What [was] the Chicago Teachers’ Strike About? Click Here.

Posted by gbrown at 1:23 PM No comments:


A Commitment to Uphold the Illinois State Constitution:

A Commitment to Violate the Illinois State Constitution:

“Now that the governor’s actions have been answered by a court, I trust that we can put aside all distractions and focus on the goal of pension reform,” Senate President John Cullerton said. “Pension reform remains our top priority.”

For further analyses, click on the "pension analyses" tab beneath the blog's masthead.