Bob Lyons, TRS Trustee: “This is my last term” 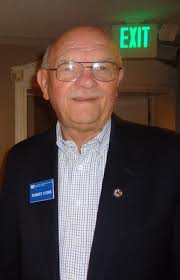 Starting in 2001 I became an observer to the TRS Board.   I attended all but one meeting for the next four years.  I was a witness to the machinations of Stuart Levine and his minions to make money from using our investments as an instrument in “pay to play.”

The reports I wrote of the meetings were actually turned over to the FBI and I was one of many that were interviewed in the investigation that took place that resulted in Levine, Tony Rezko, Governor Blagojevich, and others going to jail. In 2005 I was elected to the board with the support of the IRTA, the IEA, and the IFT and I have subsequently been reelected in 2009 and 2013.  Earlier this summer I made the decision that I would retire from the board at the end of this term.  My only concern was the uncertainty of what Governor Rauner might do with the three empty seats on our board.

This past Friday, though they were under considerable pressure from the governor’s office, the four appointed members of the board, including Tony Smith, the State Superintendent of Education, stood up and voted with the elected members of the board to lower our assumed rate of return from 7.5% to 7%.  This was the right thing to do, but it is going to cost the state of Illinois more than $400 million dollars in additional state contributions to our pension fund.  That convinced me that we have strong and capable board and that I could step down at the end of my term in the summer of 2017.

I am proud of the role that I have played and that I have tried to serve not only the annuitants to our system but the people of the state of Illinois to the best of my ability.  I am currently serving as the chair of the investment committee and I can tell you that we continue to make money in what is a difficult time for investments.  I thank all of you that have supported me and shown your confidence in my stewardship.   I have enjoyed being on the board, the board and staff of TRS are some of the best people that I have ever known and they are doing an outstanding job for all of us.  The checks will keep coming. 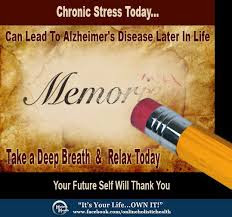 “Feeling stressed may increase the likelihood that you’ll develop memory problems and could increase your risk of developing Alzheimer’s disease, a new study reports. The good news is that taking steps to manage and reduce stress, the authors say, might be a way to help maintain brain health and ward off memory problems with age.

“The study, from researchers at Albert Einstein College of Medicine in New York, found that high levels of stress in older people was linked to an increased risk of mild cognitive impairment, a serious form of memory loss that often precedes Alzheimer’s disease. The researchers found that people who experienced high and persistent levels of stress were twice as likely to develop mild cognitive impairment than those who felt less stressed.

“‘Our study provides strong evidence that perceived stress increases the likelihood that an older person will develop mild cognitive impairment,’ said Dr. Richard Lipton, the study’s senior author and a neurology professor at Einstein and Montefiore Health System. ‘Fortunately, perceived stress is a modifiable risk factor for cognitive impairment, making it a potential target for treatment.’

“‘Perceived stress reflects the daily hassles we all experience, as well as the way we appraise and cope with these events,’ said the study’s first author, Mindy Katz. ‘Perceived stress can be altered by mindfulness-based stress reduction, cognitive-behavioral therapies and stress-reducing drugs. These interventions may postpone or even prevent an individual’s cognitive decline.’

“…The findings add to a growing body of evidence that stress can be bad for the brain. A 2013 study from Sweden, for example, found that women who experience a lot of stress in middle age are at increased risk of developing Alzheimer’s disease and other forms of dementia late in life. Other research has shown that stress can hasten the progression of Alzheimer’s disease.

“High levels of stress and the stress hormone cortisol have been shown to damage brain cells and promote inflammation, which has been increasingly linked to Alzheimer’s disease… Many factors contribute to Alzheimer’s, including age and genetics. Long-term stress may be one more factor that may play a role in the onset of dementia.”