Why Is There a Pension Clause to Protect Illinois Public Employees? (from the Lawsuit filed by the We Are One Coalition of Illinois on January 28, 2014) 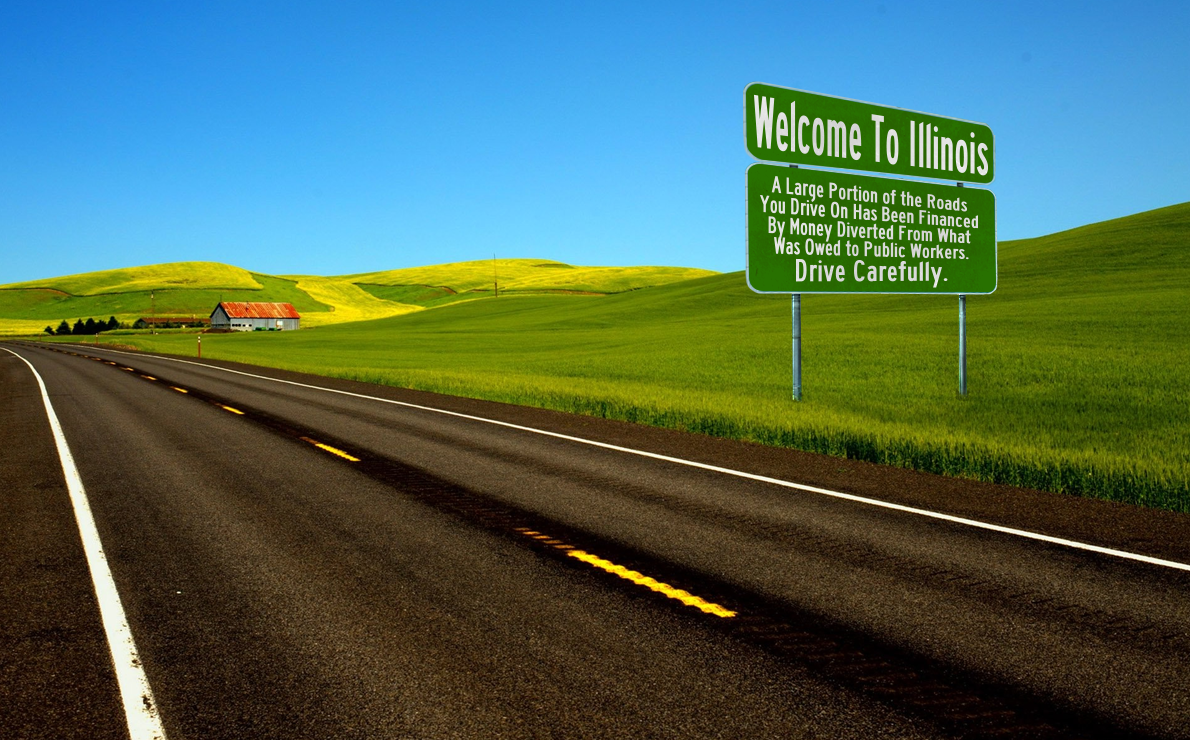 “Although this litigation involves the unconstitutionality of Public Act 98-0599, its underpinnings involve much more than a legal question. At base, this litigation concerns an ethical and moral promise to provide a certain level of retirement security for the women and men who chose to serve Illinois and its citizens.

“The majority of Illinois' public employees in State retirement systems are not eligible to receive Social Security, including all employees who are members of TRS and SURS and many SERS members. For many individuals, their State pension is their life savings and is all that that stands between them and poverty.

“In 1970, the State recognized this situation and took action to assure the retirement security of these public workers. At the time of the 1970 Illinois Constitutional Convention, fifteen of the seventeen retirement systems that the Illinois Pension Code encompassed were mandatory plans, allowing the Illinois legislature to change or revoke those plans' terms. At the same time, the pension systems were no better funded than they are today.

“For example, TRS, SERS, and SURS then were funded at approximately 40%, 43% and 47% levels, respectively. Concern that pension system funding issues might lead the State to abandon its pension obligations to the men and women who serve Illinois and its municipalities prompted Illinois to adopt the Pension Clause.

“As indicated, the Pension Clause protects pension benefits, which include the criteria used to determine eligibility for a non-discounted pension and the method by which the amount of a member's initial pension amount and subsequent yearly pension annuity is calculated: ‘Membership in any pension or retirement system of the State, any unit of local government or school district, or any agency or instrumentality thereof, shall be an enforceable contractual relationship, the benefits of which shall not be diminished or impaired’ (Ill. Const. 1970, art. XIII, § 5.).

“Pursuant to the Pension Clause, a member's pension benefits are guaranteed by an enforceable contract with the State that the State cannot unilaterally diminish or impair by legislation or otherwise, no matter the circumstance.

“A public employee's contract right to the pension benefits, including the amount of pension, vests on the member's first day of membership in a State retirement system. The effective date of membership in SERS, SURS and TRS is the day on which a member begins employment in a position that is covered by SERS, SURS or TRS. A pension system member first contributes to the system on his or her first day of paid service. And, thereafter, where the State enhances those benefits, the member's right to the enhanced benefits vests upon the member's continued participation in the system following the effective date of that enhancement.
“INITIAL PENSION AMOUNTS ARE DETERMINED By STATUTORY FORMULAS SET FORTH IN ILLINOIS' PENSION CODE

“The pensions that Plaintiffs receive, or will receive upon retirement, as members of SERS, SURS and TRS are defined benefits. That is, the pension amount that a member receives over the course of his or her retirement is specified by formula set forth in Illinois' Pension Code. As such, the State is able to determine actuarially the approximate amount that each member will receive in retirement and the concomitant amount that should be contributed to each pension system each year to make sure that each member receives the annuity amount that the State promised to him or her.

“Public Act 98-0599 diminishes and impairs pension amounts of SERS, SURS and TRS members regardless of the formula used to calculate a member's initial pension amount…

1. “[Pension reform] constitutes a unilateral attempt to modify public employees’ employment agreements with the State, even with respect to those employees who have already retired… A unilateral reduction of pension rights is unconstitutional, even if coupled with an equally unilateral [precarious] benefit that the [Illinois] General Assembly [and We Are One Coalition] imagines retired and active public employees might theoretically find desirable…” (Gino L. DiVito, John M. Fitzgerald, and Katherine M. O’Brien of Tabet, DiVito & Rothstein LLC (2013) Memorandum to Illinois Retired Teachers Association) (link: Constitutional Issues Concerning…).

2. “Pension benefits are under siege for two reasons: opportunity and political motives… [Legislators] frame [the] larger discussion of whether the law provides states with a means to achieve a particular objective: the unilateral reduction of public pension benefits to avoid painful tax increases, service cuts, or both… For decades, states have treated pension systems as a credit card to pay for government services and avoid tax increases or service cuts…” (Eric M. Madiar, Chief Legal Counsel to Illinois Senate President John J. Cullerton and Parliamentarian of the Illinois Senate (2012), Public Pension Benefits under Siege: Does State Law Facilitate or Block Recent Efforts to Cut the Pension Benefits of Public Servants?)

“Most states… cannot readily reduce their existing pension obligations to their employees in an effort to solve a fiscal crisis, and until recently few even tried… It is worth noting the inequity inherent in cutting pensions promised to state and local public servants based on alleged underfunding that was substantially caused, in many cases, by funding “holidays…” [Approximately $15 billion was stolen from the Teachers Retirement of Illinois. This amount does not include the possible investment income that would have been earned].

“[Any] attempt to denigrate the validity of decades of judicial precedents about the binding nature of legislation establishing pension commitments to government employees and to motivate state courts to overturn long-settled premises about these commitments would impose its own, unjustifiable costs. The states and their instrumentalities have promised pension benefits to their employees; those employees have relied on those long-standing promises; and as a result the citizens of the states have benefited from the services provided by those employees…” (Douglas L. Greenfield and Lahne, Susan G. (2012), How Much Can States Change Existing Retirement Policy? In Defense of State Judicial Decisions Protecting Public Employees’ Pensions) (link for quotations: Defending and Protecting Public Employees’ Pensions against the Legislative Siege).

4. “The Pension Clause’s plain language reveals that an employee’s contractual rights exist and are legally secured at the time of membership, and those rights cannot be unilaterally reduced or voided thereafter. Nowhere does the Pension Clause limit protection… to only ‘benefits that were previously earned.’ To reach [another] conclusion, the provision would need to add the word ‘earned’ or ‘accrued’ before the word ‘benefits’…” (Madiar (2011), Is Welching on Public Pension Promises an Option for Illinois? An Analysis of Article XIII, Section 5 of the Illinois Constitution) (link: A Trifecta of Political Opportunists).

5. “A plain language reading of the Pension Clause’s text makes clear that governmental entities may not reduce or eliminate a public employee’s pension payments and other membership entitlements once the employee becomes a pension system member. At the same time, the plain language also indicates that an employee’s pension payments and other membership entitlements are ‘contractual’ rights that may be presumably altered through mutual assent via contract principles. [Note: the Cullerton and Coalition agreement did not have approbation of thousands of retirees and non-union members]. Further, the Clause’s prohibitory language against the diminishment or impairment of pension benefits is cast in absolute terms and lacks any exceptions…” (Madiar (2011), Is Welching on Public Pension Promises an Option for Illinois? An Analysis of Article XIII, Section 5 of the Illinois Constitution) (link: Illinois Pension Clause’s Convention Debates, Text and Historical Background).

6. “One thing we cannot do… is [to] ignore the Constitution of Illinois.... No principle of law permits us to suspend constitutional requirements for economic reasons, no matter how compelling those reasons may seem…” (link: COLA: a Guarantee for Illinois Judges).

7. “Illinois courts have concluded that the Pension Clause affords legislature no police reserved power” to impair a constitutional guarantee (Madiar (2011), Is Welching on Public Pension Promises an Option for Illinois? An Analysis of Article XIII, Section 5 of the Illinois Constitution) (link: What happens if the Illinois public pension funds are “on the verge of bankruptcy?”).

8. “One might assume the government of Illinois would not want to prove that its promises are worthless, especially when the most basic purposes of the impairment [of the contract] clause [Article XIII, Section 5] as well as notions of fairness that transcend the clause itself, point to a simple constitutional principle: government must keep its word” (Laurence H. Tribe, American Constitutional Law) (link: A Discussion We Do Not Want to Have).

9. The significance of any modification of the “Pension Clause” is “the extent to which [public employees] will be deprived of the benefit [they] reasonably expected; the extent to which [public employees] can be adequately compensated for the part of that benefit [COLA, for instance] of which [they] will be deprived; […and] the extent to which the behavior of the party [Illinois General Assembly] failing to perform or to offer to perform [or] comports with standards of good faith and fair dealing…” (Professor of Law, Emeritus, Claude D. Rohwer and Professor of Law, Emeritus, Anthony M. Skrocki, Contracts in a Nutshell)  (link: Modification of Contract Principles (and what many petitioners want their unions to do).

10. What is at stake right now is not a potential adjudication of conflicting claims that public employees will have against policymakers who want changes to retirees’ and public employees’ earned compensation and rights, but to respect the retirees’ and public employees’ contractual and constitutional promises because they are legitimate rights and moral concerns not only for public employees, but for every citizen in Illinois: for any unwarranted acts of cheating a person’s guaranteed rights and earned compensation will violate interests in morality and ethics and the basic principles of both the State and United States Constitutions that protect every one of us (link: Illinois Pension Reform Is Without Legal and Moral Justification).

11. Many legislators of the Illinois General Assembly are controlling the focus and conversation regarding the state's pension debt, while ignoring the causes of the state's budget deficits. No matter what pension reform bill is passed, it will never be enough to address the serious underlying problems that exist. These legislators will attack public employees' pensions again because they were able to make retirees and public employees the scapegoats for the problems they have caused. Public employees across the country are also victims for much greater problems… (link: Why Any Illinois "Pension Reform" Is a Devious Ruse).

12. Illinois legislators ignore the fact that the state “suffers from structural deficits or from failure of revenues to grow quickly as the cost of services…, [and that] structural deficits stem largely from out-of-date tax systems, coupled with costs that rise faster than the economy… Fixing these structural problems would help [Illinois] balance [its] operating budgets without resorting to [a reckless and radical “pension reform” instigated and propagandized by the Civic Committee, Civic Federation, Chicago Tribune and the legislators they influence]” (The Center on Budget and Policy Priorities) (link: Understanding Illinois’ Budget Deficit and Solutions).
Posted by gbrown at 6:03 AM 1 comment: