Amid all the Medicare Advantage confusion, have we forgotten there are approximately 600 TRS retirees paying more for health insurance than anyone else?

Having noticed the agenda of the CoGFA hearing scheduled for October 23, 2013 relates to retirees' Health Insurance, I wish to once again relate some major concerns.

Many "downstate" teachers who retired in 2004 were required to notify TRS a year or two in advance that they were retiring in 2004. One month after we retired, there was a TRS buy into Medicare Plan, which began on July 1, 2004. We were not able to take advantage of that opportunity. That information was not given to us in 2002-2003 either. Without Medicare, we do not qualify for secondary health insurance.

According to a recent FOIA request from the Comptroller's Office, there are 605 of us who do not have the needed 40 quarters for Social Security/Medicare and who made a choice to continue to reside IN Illinois since 2004; as a result, we have been charged more than $59,900 for single coverage health insurance premiums with the State self-insured CIGNA plan.

At the same time those retirees, age 65+ enrolled in the very same CIGNA Health Insurance Plan but made a choice to move OUT of the State of Illinois, have been charged 1/2 the cost for their premiums $29,000+.

According to the recent CMS notification, retirees age 65+ and without Medicare who make the choice to reside IN Illinois (2013 – 2014) pay a monthly premium of $719.96 for their CIGNA health insurance.

At the same time, retirees age 65+ and without Medicare who make the choice to live OUT of Illinois, are charged $359.99 a month for the very same health insurance coverage using the CIGNA network of Doctors, etc.

Some of us reside IN the school districts where we retired and have been charged disproportionate (double) premiums due to making a choice to reside IN an Illinois School District.

As you address issues relating to retired teachers' health insurance plans, I respectfully request you take into consideration these facts. May I also bring to your attention the many audits related to the TRS TCHP Health Insurance Plan and the lack of a written methodology for setting premiums, as stated by the Office of the Auditor General? I have also submitted written (pdf.) documents related to this issue. Thank you.

Why are approximately 600 TRS retirees paying more for health insurance than anyone else?  Click Here.

Posted by gbrown at 9:47 AM No comments:

"Alicia H. Munnell is the Peter F. Drucker Professor of Management Sciences, Carroll School of Management and Director of the Center for Retirement Research at Boston College. She has served as assistant secretary of the Treasury for economic policy and as a member of the President's Council of Economic Advisers... Munnell has written several books, including Working Longer: The Solution to the Retirement Income Challenge and State and Local Pensions: What Now?" 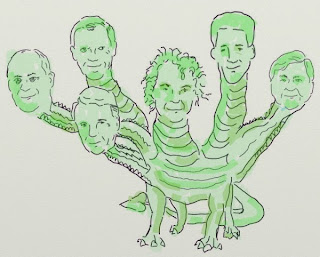 
“…While many of [Phil Kadner’s] colleagues in the news media as well as civic groups and business organizations have been demanding pension reform and shouting that the sky is falling, they’ve been looking at meteor showers way off in the distance instead of focusing on the giant asteroid heading directly at Springfield. [Kadner] says that because any pension reform isn’t going to have an immediate impact on the state budget — either the amount of money it gets or the amount it spends.

“Illinois’ budget this year is more than $8 billion in the red, some would say closer to $9 billion. That’s after the state raised the personal income tax rate last year from 3 percent to 5 percent and the corporate rate from 4.8 percent to 7 percent to bring in about $6 billion more a year...

“The Governor’s Office of Management and Budget has stated that even with anticipated growth in sales tax income and other new sources of revenue (if the economy continues to recover), the state will incur an estimated $3.76 billion loss in overall revenue if the income tax hikes are allowed to expire…

“What pension reform today would do is lower the interest rate that the state would pay on the sale of bonds. In other words, Illinois could borrow more money and spend even more money than it has. And that’s exactly how the pension ‘crisis’ was created in the first place. Instead of making its mandated payments to its five pension systems, the state for decades spent that money on other government programs.

“Back in 1995, Ralph Martire, [Executive Director of Center for Tax and Budget Accountability] said, Republican Gov. Jim Edgar recognized the problem, and a law was passed requiring Illinois to make its annual pension contribution, including interest on what it owed. Only, under Edgar’s plan, the so-called ‘pension ramp’ didn’t begin for another 15 years.

‘“It was the perfect political solution,’ Martire said. ‘You keep on spending while kicking the can down the road, and the idea was that none of those elected officials would be around in 15 years when that pension ramp kicked in.’ [What legislators are still around? Click Here.]

“Martire contends that it’s the ramp, including 8.5 percent interest on the amount of money owed, that’s creating the pension crisis more than the benefits provided by the five plans. He said the state’s pension contribution last year was $4.1 billion, of which only $1.6 billion was the cost of funding benefits. In fiscal year 2013, more than $5 billion went to repay debt incurred.

“So even if benefits were changed to bring down that annual amount to $1 billion (a really good deal), it wouldn’t offset the billions of dollars the state loses once that temporary income tax increase vanishes.

“Martire makes the argument that Illinois would be better off ‘getting rid of the crazy amortization payment schedule for pensions’ instead of cutting benefits for employees. But, and it’s a big but, the state would have to go to a graduated income tax (replacing the flat tax now in place) and broaden its sales tax base. That would boost tax revenue and enable the state to afford a pension repayment schedule that was more reasonable, according to Martire.

“‘Within a few years, we could have a balanced state budget and the pension systems would be sound going into the future because the state would be able to make its payments,’ he said. ‘And Illinois might finally have enough money to fund education properly…’”
This article is by Phil Kadner: The real financial crisis in Illinois


A real “crisis” in Illinois is the legislators’ (and some business leaders') attempt to violate constitutional contracts: Illinois “Pension Reform” Is Without Legal and Moral Justification

Posted by gbrown at 6:45 AM No comments: