Loving statistics, these 10 posts together add up to more than 55,000 page views on my blog. Here are their links:

Pension Reform Is Without Legal and Moral Justification (May 29, 2012)

COLA: a Guarantee for Illinois Judges (What about Public Employees?) (January 2, 2013)

Exhaustion of the American Teacher by John Kuhn (October 8, 2012)

One more statistic: 125,000+ page views on this blog come from other countries.

Email ThisBlogThis!Share to TwitterShare to FacebookShare to Pinterest
Labels: blogging

“We do not count within the political process” —Chris Hedges 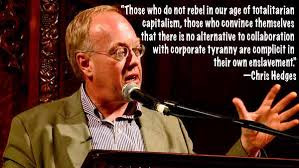 “…This truth, emotionally difficult to accept, violates our conception of ourselves as a free, democratic people. It shatters our vision of ourselves as a nation embodying superior virtues and endowed with the responsibility to serve as a beacon of light to the world. It takes from us the ‘right’ to impose our fictitious virtues on others by violence. It forces us into a new political radicalism. This truth reveals, incontrovertibly, that if real change is to be achieved, if our voices are to be heard, corporate systems of power have to be destroyed. This realization engenders an existential and political crisis. The inability to confront this crisis, to accept this truth, leaves us appealing to centers of power that will never respond and ensures we are crippled by self-delusion.

“The longer fantasy is substituted for reality, the faster we sleepwalk toward oblivion. There is no guarantee we will wake up. Magical thinking has gripped societies in the past. Those civilizations believed that fate, history, superior virtues or a divine force guaranteed their eternal triumph. As they collapsed, they constructed repressive dystopias. They imposed censorship and forced the unreal to be accepted as real. Those who did not conform were disappeared linguistically and then literally.

“The vast disconnect between the official narrative of reality and reality itself creates an Alice-in-Wonderland experience. Propaganda is so pervasive, and truth is so rarely heard, that people do not trust their own senses. We are currently being assaulted by political campaigning that resembles the constant crusading by fascists and communists in past totalitarian societies. This campaigning, devoid of substance and subservient to the mirage of a free society, is anti-politics.

“No vote we cast will alter the configurations of the corporate state. The wars will go on. Our national resources will continue to be diverted to militarism. The corporate fleecing of the country will get worse. Poor people of color will still be gunned down by militarized police in our streets. The eradication of our civil liberties will accelerate. The economic misery inflicted on over half the population will expand. Our environment will be ruthlessly exploited by fossil fuel and animal agriculture corporations and we will careen toward ecological collapse. We are ‘free’ only as long as we play our assigned parts. Once we call out power for what it is, once we assert our rights and resist, the chimera of freedom will vanish. The iron fist of the most sophisticated security and surveillance apparatus in human history will assert itself with a terrifying fury…”

From The Illusion of Freedom by Chris Hedges


Hedges graduated from Harvard Divinity School and was a foreign correspondent for The New York Times for nearly two decades. He is the author of many books, including: War Is A Force That Gives Us Meaning, What Every Person Should Know About War, and American Fascists: The Christian Right and the War on America.  His most recent book is Empire of Illusion: The End of Literacy and the Triumph of Spectacle.

“The vast inequality [the plutocrats] are creating is a death sentence for government by consent of the people. This is the fight of our lives and how it ends is up to us. In the fall of 2001, in the aftermath of 9/11, as families grieved and the nation mourned, Washington swarmed with locusts of the human kind: wartime opportunists, lobbyists, lawyers, ex-members of Congress, bagmen for big donors: all of them determined to grab what they could for their corporate clients and rich donors while no one was looking.

“Across the land, the faces of Americans of every stripe were stained with tears. Here in New York, we still were attending memorial services for our firemen and police. But in the nation’s capital, within sight of a smoldering Pentagon that had been struck by one of the hijacked planes, the predator class was hard at work pursuing private plunder at public expense, gold-diggers in the ashes of tragedy exploiting our fear, sorrow, and loss.

“What did they want? The usual: tax cuts for the wealthy and big breaks for corporations. They even made an effort to repeal the alternative minimum tax that for fifteen years had prevented companies from taking so many credits and deductions that they owed little if any taxes. And it wasn’t only repeal the mercenaries sought; they wanted those corporations to get back all the minimum tax they had ever been assessed…”

From The Plutocrats are winning. Don’t Let Them by Bill Moyers