How Bad Is Illinois' Current General Fund Deficit? (from the Center for Tax and Budget Accountability) 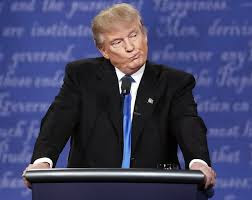 A Sample of Trump’s Fallacies:

Non Sequitur: Trump’s assertions or conclusions are not necessitated by any premise(s). Most of the time, there are no logical premises for an argument. Consider: “Excuse me. I will bring back jobs. You [Hillary Clinton] can’t bring back jobs… Well, I’m really calling for major jobs because the wealthy are going to create tremendous jobs… I have a great company. I have tremendous income, and the reason I say it is not a braggadocios way. It’s because it is about time that this country had somebody running it that has an idea about money… I think my strongest asset, maybe by far, is my temperament. I have a winning temperament” (First presidential debate, Sept. 26).

Name Calling: Trump often uses name calling to stigmatize his opponents’ points of view. “He has attacked every Republican candidate, including Hillary Clinton. He has called Clinton a ‘bigot’; he has attacked her as ‘brainwashed,’ ‘unhinged,’ ‘a monster,’ ‘the devil” (Olbermann).

However, “nice” whiny Trump said at the end of the first presidential debate: “I was going to say something extremely rough to Hillary, to her family, and I said to myself I can’t do it. I just can’t do it. It’s inappropriate; it’s not nice… But it’s certainly not a nice thing that she’s done. It’s hundreds of millions of ads, and the only gratifying thing is I saw the polls come in today and with all of that money, over two hundred million spent and I’m either winning or tied.”

Slogans: Trump’s short, catchy phrases are intended for general consumption and designed to terminate thought and promote action in favor of himself. “Make America Great Again” is meaningless. His favorite qualifiers “To be honest with you” and “believe me” are signals for dishonesty.

Fallacy Ad Hominem: Instead of addressing important issues, Trump will choose to attack a person’s character or physical attributes. We all remember when Trump ridiculed a disabled reporter.

Fallacy of Racism: Trump has repeatedly revealed false prejudices against a genetic class or ethnic group of human beings. He “attacked Judge Gonzalo Curiel because he was of Mexican descent; he attacked Mexicans by calling them rapists who bring drugs and crime to America; he has proposed a wall along the Mexican border to keep out undocumented immigrants; he has proposed banning Muslims from entering this country as well…” (Olbermann).

Fallacy of Prejudice: Trump's unwillingness to examine fairly any evidence and reasoning in behalf of a person or idea which is the object of his bias reveals his bigotry. (See examples from Fallacy of Racism).

Fallacy of Composition: Trump reasons improperly from a member of a group to a property of the group itself. (See also examples from Fallacy of Racism)

Fallacy of Argument (ad antiquitam): Trump uses irrelevant, out-of-context appeals to a time past in order to justify a supposed better future without proof of argument. “I’m going to make America great again.”

Fallacy of Concurrency: Because some things exist or appear simultaneously, Trump claims that one is the cause of the other. He believes President Obama and Hillary Clinton created ISIS. He also said, “Our country is suffering because people like Secretary Clinton have made such bad decisions in terms of our jobs and in terms of what is going on…” (First presidential debate, Sept. 26).

Trump’s Appeal to Hatred (ad odium): He has “attacked Gold Star parents, Khizr and Ghazala Khan, and then juxtaposed their names with the phrase ‘Radical Islamic Terrorism’; he has ‘offered to pay the legal fees of any supporter who becomes physically violent against a heckler; he has encouraged crowd members to harass and threaten a reporter, who he called out by name and who then needed Secret Service protection; he has proposed ‘ideological certification’ for immigrants; he has proposed worse than waterboarding while praising how Saddam Hussein, Vladimir Putin, and Kim Jong-un handled protest and terrorism; he has proposed that American civilians be tried by military commissions at Gitmo; he has proposed killing the families of terrorists or suspected terrorists…” (Olbermann).

Trump’s Appeal to Fear (ad metum): He has proposed a wall along the Mexican border to keep out undocumented immigrants; he has said “we are a nation that is seriously troubled… [The Chinese] are taking our jobs… [Our] companies are leaving [our country]… I mean there are thousands of them… Our energy policies are a disaster…” (First presidential debate, Sept. 26).

Trump’s Appeal to Ridicule: He attempts to influence people to accept or reject a person or issue by poking fun at those who oppose the proposition. (We all remember the so-called Republican debates).

Argument by Innuendo: Trump uses derogatory suggestions; when arguing he also uses suggestions in place of evidence. He “attacked Megyn Kelly for having ‘blood coming out of her wherever’” (Olbermann).

Causal Oversimplification: Trump reasons improperly complex events through references to only one or two probable causes; whereas, many are responsible. In this case, and without stating any of the causes of the problems, he has claimed he will “fix the problems of African-Americans” (Olbermann).

Strawman Fallacy: Trump restates his opponent’s argument falsely and then exaggerates the consequences that may follow from his vulgarization. (the so-called Republican debates).

Tabloid Thinking: To think in tabloids is to over simplify a complex theory or set of circumstances. Trump prefers quick, short summaries. “The wealthy are going to do great things”; “it’s going to be a beautiful thing to watch…” and “We have a Fed that is doing political things. This Janet Yellen of the Fed is doing political by keeping interest rates at this level” (First presidential debate, Sept. 26).

Reductive Fallacy: Trump reduces complexity to simplicity while speaking about causal explanations. Trump stated: “Had we taken the oil [in Iraq], and we should have taken the oil, ISIS would not have been able to form…” By the way, this would also be illegal under international law. (First presidential debate, Sept. 26).

Unethical Quips (Though not considered fallacies; nevertheless, they are egregious remarks and quite revealing of his character): During the debate: On whether Trump has paid any federal taxes, his reply: “That makes me smart.” On people losing their homes and life savings during the recent recession and Trump profiting off their losses, his reply: “That’s called business, by the way.” For not paying a person he hired to do work, his reply: “Maybe he didn't do a good job...”

Begging the Question: Trump assumes as true what has yet to be proved. That applies to just about everything he says!

I used many of the above examples for Trump’s fallacies from 176 Reasons Why Trump Shouldn’t Become President by Keith Olbermann; I gleaned others from the first presidential debate.

Posted by gbrown at 3:41 PM No comments: