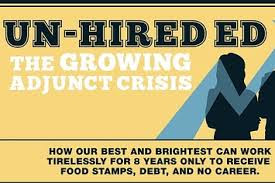 “Due to the continued corporatization of higher education, contingent faculty—adjunct and non-tenure track instructors—are at a crisis point. Nowhere is this inequity more hypocritical than in Jesuit colleges, such as Loyola University Chicago.

“Students pay more for college than ever, yet less of their overall tuition actually goes to their professors. At Loyola, it has been seven years since adjunct faculty received a raise in pay. Between 2002 and 2012, Loyola quadrupled the number of adjuncts it employs, while decreasing instruction spending by 11 percent. In the meantime, Loyola's total revenues have risen by over a quarter of a billion dollars. Though tuition is skyrocketing, roughly 15 percent of faculty at Jesuit institutions have had to rely on public assistance.

“Without a stable career base, contingent faculty cannot best serve their students. Nationally, a reported 46 percent of instructors believe students are receiving insufficient support from their professors because of work overload and other challenges. This deficiency most greatly affects those at the highest risk, i.e., nontraditional students, whose need for individualized instruction and specialized ballasting demands time and resources that adjuncts and NTT faculty simply do not possess.

“In protest of this and other institutionalized injustices, faculty presented Loyola's administration with the Jesuit Just Employment Petition in April 2015, declaring all campus workers' right to fair pay, benefits, a safe and just work environment, and the freedom to form unions without employer interference or retaliation. This petition spoke directly to Loyola's social justice mission, a core tenet of Jesuit education.

“This motion, as well as various subsequent actions, was met with silence from the administration. When Loyola contingents did file to organize with the Service Employees International Union, the university protested. It claimed that the laws that protect workers' right to organize do not apply because of Loyola's religious affiliation, as well as arguing just who among the faculty should make up the bargaining unit.

“This month, the National Labor Relations Board overruled Loyola on all of its positions. Despite intimidating emails from administration in recent months, adjunct and NTT instructors are undeterred and today voted to form a union.

“The culture of adjunct and NTT vulnerability perpetrated by Loyola University is neither in keeping with its Jesuit ideals nor in the best interest of its student body. The public is often unaware of the difficulties facing contingent faculty, but students and their families are feeling the repercussions of an educational system that does not value its educators.

“By forming a union, contingent faculty can negotiate in the best interest of students, faculty and the social justice mission of the university. Adjunct and NTT instructors should be championed in their efforts to better support their students and themselves.”

The above article, I’m an adjunct professor at Loyola. Why I just voted to unionize by Alyson Paige Warren, was printed in Crain’s.

Though these two commentaries are responses to Reverend Dennis H. Holtschneider’s editorial from Inside Higher Ed (January 28, 2016) regarding DePaul University v. the Unionization of Its Adjunct Faculty, they are relevant to the aforementioned issue:

“…Isn't it more than hypocritical to oppose the adjunct's unionization effort on the basis of the integrity of your Catholic faith when you've already compromised that faith to such an extent by exploiting your adjuncts that you've driven them to unionization in the first place? If your Catholic faith had any integrity whatsoever, your adjuncts wouldn't want or need a union to safeguard their interests. As I understand it, all they're seeking is equal pay for equal work, a living wage, opportunity for advancement, and working conditions that respect their basic human dignity, and apparently your Catholic faith is so lacking in integrity already that it hasn't provided for these basic needs. What's most pathetic and despicable about your column comes at the end when we learn that it's the Catholic institutions that are the real victims here, not the exploited overworked underpaid government-subsidized adjunct freeway fliers living course-to-course in poverty, or the students whose education you've placed into the hands of contingent migrant laborers” (Refereeing Religion?).

“The DePaul President presents and argues for a case of 'exceptionalism'; that educational institutions with religious affiliations are exempt from outside interference or interpretation in their determination and negotiation of labor-related issues. This 'exceptionalism' is derived from and justified through, according to the President, a particularly unique labor-church relationship whose distinctiveness and legitimacy is, according to the President, upheld by the USSC as the 'law of the land' and that any attempt to reverse or interfere with this 'exceptional' relationship will have ramifications ‘not only for Catholics but for all Americans… The President is, perhaps (at least in theory), correct in his concern of the precedent that would be set, and the snowballing potential for further incursions into religious freedom and structure, with any attempt to reverse or roll-back this court-acknowledged exceptionalism. That said, there is a very specific and clear articulation - both expressed below and more formally that contingent faculty feel they are being exploited; that in a period of million dollar (or close to it) compensation for the President and the DePaul men's basketball coach, the President's decision (against the will of DePaul faculty) to invest in a multi-million dollar basketball arena, and other economic adventures DePaul is pursuing a development model, including wage structure (haves vs. have nots), that is hardly exceptional but, indeed, par for the course. While the President may or may not ‘be merely hiding’ behind the exceptional standard to which he and DePaul are privy, his use of it to parry criticism of DePaul's compensation and (over) use of contingent faculty does come across as superbly convenient, if utterly unreflective” (Refereeing Religion?).


“…In 2013, NPR reported that these itinerant teachers make up 75 percent of college professors, and their pay averages between $20,000 and $25,000 annually. And this trend may be long term, as three in four college professors are not on a tenure track, the American Association of University Professors (AAUP) reports. According to a 2015 study by the UC Berkeley Labor Center, 25 percent of part-time college faculty and their families are enrolled in a at least one public assistance program such as Medicaid or food stamps. Most adjunct professors are forced to work two jobs to make ends meet…” (The Christian Science Monitor).
“We are the stoop laborers of higher education: adjunct professors. As colleges and universities rev for the fall semester, the stony exploitation of the adjunct faculty continues, providing cheap labor for America’s campuses, from small community colleges to knowledge factories with 40,000 students” (Colman McCarthy, Adjunct professors fight for crumbs on campus).
“Memories of the university as a citadel of democratic learning have been replaced by a university eager to define itself largely as an adjunct of corporate power. Civic freedom has been reduced to the notion of consumption, education has been reduced to a form of training, and agency has been narrowed to the consumer logic of choice legitimated by a narrow belief in defining one's goals almost entirely around self-interests rather than shared responsibilities of democratic sociability…” (Higher Education and the New Brutalism).
Why We Need Unionization for College Adjuncts:
“…RESOLVED, that the AFT will continue to work with its affiliates and promote their successes in collective bargaining to bring about the elimination of contingency within the instructional workforce by advocating for faculty currently in contingent positions and all new faculty entering the workforce to achieve: