What could it be like for an active teacher in Illinois if Rauner was able to enact the policies of Wisconsin’s Governor Scott Walker? 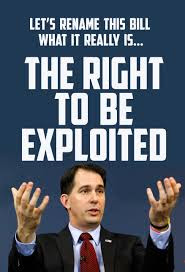 A member of the Executive Board of the West Lake Shore Unit-IRTA has a sister who teaches in Wisconsin. Here is her tale of woe (from Al Popowits).

I knew you would understand what we're going through since Act 10 five years ago. [Act 10 is the collective bargaining reform law that curtailed the powers of public employee unions, reduced the take-home pay of most public workers, and caused months of protests in Madison].  We have no collective bargaining and have received about 1.3% raise each year with no "steps" to reflect experience.  Six unpaid days were added to our school year four years ago, and there's nothing we can do about it.

We tried to fight it by protesting at the capitol building and in the courts.  The WI Supreme Court was appointed by Walker, so it was determined that there is nothing in the WI Constitution that states you can't discriminate against certain groups of public employees.  The state police, sheriffs, and firefighters are not bound by Act 10. They are the three groups who supported Walker's first campaign. Walker is now talking about going after our pensions and turning all of them into 401(k) plans after removing millions of dollars in interest.  He claims that money belongs to the taxpayers and not the teachers.

Walker has removed the Secretary of State, the Head of Department of Natural Resources, and Head of the Treasury. Walker is now in charge of all decisions made in all of those departments.  It's a dictatorship here and, as you said, it's particularly disturbing that this precedent is even being considered as a model for other states.

We were cut to $75 per student from the state when Walker first took office and, with his reelection, he has cut public schools to $0 per student while giving $1500 per student to private charter and voucher schools.  I have all the requirements to be certified as a reading specialist, but they will only give me the license if I don't work for a public school.

Whenever a teacher leaves, he/she is not replaced.  I am averaging 70-hour work weeks this year, and Bob and I had a long discussion about whether I should sign my contract for another year.  However, it's five more years until I can retire, and though our health insurance costs have risen it's still one of the better plans out there.

We have a 190-day contract (including six unpaid days), and we work until the end of the 2nd week of June every year.  Special education teachers start August 17th this year, again with no pay until August 24th.  I know it's crazy to keep working this hard, but we live out in the middle of nowhere for Bob's job and we don't want to lose it.

I do love my kids. I teach 4K through 5th, but administration has promised to make it 4K through 4th next year.  If it wasn't for loving my kids, I think I would have left teaching a long time ago.  It's difficult to keep working so hard and being treated so poorly and with disrespect.  The latest projection in WI is that only 5% of graduating high school seniors are choosing teaching as a career.

I am hoping the Democratic legislature in Illinois will block all Republican plans to emulate WI.

Thanks for listening to all that!  I am very much looking forward to summer break, but we have been assigned a book to read over the summer as a book study. That would be funny if it wasn't true!

Hope everyone in your family is doing well.  I know we are ALL looking forward to summer!