“…The plain language of the Pension Protection Clause, the stated intentions of its drafters, and this Court's precedent all compel the conclusion that the Act [SB 1] exceeds the constitutional limits of legislative power. The Pension Protection Clause unambiguously prohibits the diminishment of public pension benefits. Notwithstanding the defendants' insistence that the Clause incorporates unstated exceptions to that absolute bar, the Clause cannot be read to include the defendants' implied terms. It contains no exception for exercises of the General Assembly's police powers or reserved sovereign powers.

“The language used in a constitutional provision ‘should be given its plain and commonly understood meaning unless it is clearly evident that a contrary meaning was intended,’ and someone who argues that the language ‘should not be given its natural meaning understandably has the burden of showing why it should not.’ Coalition for Political Honesty v. State Bd. of Elections, 65 Ill. 2d 453, 464-65 (1976)
(also observing that this is a ‘difficult burden’).


“If a statute is unconstitutional, ‘courts are obligated to declare it invalid,’ and this duty ‘cannot be evaded or neglected, no matter how desirable or beneficial the legislation may appear to be.’ Madclux v. Blagojevich, 233 Ill. 2d 508, 528 (2009).

“Finally, ‘to the extent that there may be any remaining doubt regarding the meaning or effect’ of the ‘pension protection provisions’ in the Pension Protection Clause, ‘we are obliged to resolve that doubt in favor of the members of the State's public retirement systems.’ Kanerva, 2014 IL 115811, 1155.
Posted by gbrown at 8:47 AM No comments: 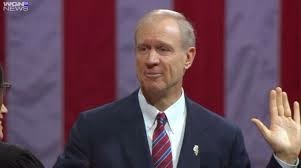 “Illinois' new GOP Governor, Bruce Rauner, will personally receive a $750,000 per year tax cut as a result of his decision not to continue the state's temporary 1.25% income tax surcharge that expired last year. His taxes were cut by an amount equal to the annual income of 14 families of four making the median income. And remember that after adjusting for inflation that median income number has not materially increased in about 35 years, since virtually all of the income growth resulting from the massive increase in worker productivity over that period has been siphoned off by speculators like Rauner. Rauner, who made $61 million in 2013 - or $29,000 per hour - is one of a small group of multi-millionaire speculators who would directly benefit enormously from lower state tax rates…

“[T]he wealthy have rigged the economic rules of the game to allow people like Bruce Rauner and the millionaires who got him elected to siphon off most of the wealth for themselves and leave middle income incomes flat.

“One of those rigged rules is found in the Illinois State Constitution. It would make sense to get much of the money needed to finance public services from those who have benefited most from the state's economy - rather than those whose incomes have been flat. You'd do that with higher income tax rates on millionaires and billionaires than the one charged for ordinary working people.

“But when the state constitution was rewritten in the 1970's, the wealthy organized to insert a provision preventing State Government from having progressive income tax rates. They wanted to keep their own share of taxes low, and to shrink state revenue in general by requiring that if tax rates go up for them they have to go up for ordinary people as well.

“That problem needs to be fixed with a Constitutional amendment that allows a progressive income tax - which of course Rauner adamantly opposes. But in the meantime it would still be possible to raise desperately-needed revenue in ways that mainly target the wealthy taxpayers by providing substantial personal exemptions in any new tax aimed at replacing the state's temporary income tax surcharge that expired last year. Rauner, of course, opposes any new state taxes and if you want to know why, just ask the mega-wealthy donors who financed his $63.9 million campaign to occupy the Governor's mansion.

“Through his new state budget, Rauner intends to continue his life's work excavating the pockets of the poor and middle class in order to benefit himself and his wealthy associates. That's why Rauner serves as the personal embodiment - the poster boy -- for Wall Street's War on the Middle Class. Bruce Rauner may think that he is auditioning for a spot on the 2016 GOP ticket or a cabinet post in a Bush, Walker or Christie administration.

“In fact he could easily become the national symbol of the trickle down economic theory that has failed to produce benefits for everyday Americans and is at the core of the economic philosophy of every one of the 2016 Republican Presidential aspirants and their billionaire backers.”

Robert Creamer is a long-time political organizer and strategist, and author of the book: Stand Up Straight: How Progressives Can Win, available on Amazon.com. He is a partner in Democracy Partners and a Senior Strategist for Americans United for Change. Follow him on Twitter @rbcreamer. 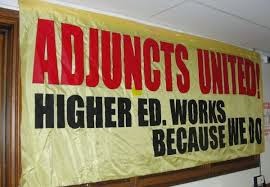 “Adjuncts sometimes say they make up higher education’s invisible class. So an idea pitched on social media a few months ago struck a chord: What would happen if adjuncts across the country turned that invisibility on its head by all walking out on the same day?

“National Adjunct Walkout Day, for Feb. 25, immediately gained support, and adjuncts continue to use social media and other means of communication to plan what the protest will look like on their campuses. Some tenure-line faculty members also have begun to pledge support, and Canadian adjuncts recently signed on, as well.

“At the same time, some unions have advised members not to participate due to no-strike clauses in contracts or state laws that prohibit striking among public employees. Others object philosophically to the idea and have proposed alternative methods of highlighting concerns about their conditions of employment. And some adjuncts worry about being the only one on their campus to participate, or not participate…

“Adjuncts elsewhere have proposed teach-ins, meaning they won’t walk out but will use the day to talk to their students about adjunct faculty concerns, such as relatively low pay, little institutional support, and the impact of their teaching conditions on student success…”

“National Adjunct Walkout Day was proposed in October by an adjunct professor of writing at San Jose State University who wants to remain anonymous, citing concerns about job security and a desire for the protest not to have a designated leader…”

“…Adjunct professors' troubling working conditions—some qualify for food stamps, and most don't get health-insurance benefits—have led some to label them ‘the hyper-educated poor.’ In response to their treatment, adjunct professors on a growing number of campuses have voted to unionize.

“Colman McCarthy, an adjunct professor and former Washington Post columnist wrote an op-ed last year laying out the financial prospects of part-time professors, who, he wrote, ‘slog like migrant workers from campus to campus.’ McCarthy estimated that teaching eight courses per year—four in the fall and four in the spring—at a median wage would earn an adjunct $21,600…

“The percentage of academics who work part-time has grown in recent decades. A 2009 survey conducted by the U.S. Department of Education indicated that 75.5 percent of instructors at institutions granting two- or four-year degrees held contingent jobs and/or were not on the track to tenure.

“According to a recent article in Elle, the reverse was true 20 or 30 years ago, when 75 percent of professors held tenured or tenure-track positions. In the past, adjunct professorship could be thought of as the way dues were paid before attaining tenure, but these days many adjuncts who have worked for years or even decades cannot realistically expect to attain full-time professorship.

“Health-care benefits have also become a flashpoint among adjuncts since Obamacare was enacted. Many universities are struggling to maintain the status quo under the Affordable Care Act’s mandate that employers must offer health insurance to anyone working 30 hours or more per week—a requirement that some universities have responded to by reducing adjunct faculty hours.

“Miranda Merklein, a former adjunct professor and now a part-time employee of the nonprofit New Faculty Majority, says she saw this happen firsthand. ‘One of my schools, in line with predatory colleges across the country, cut our teaching hours to deny adjuncts—the bulk of their teaching force—health insurance under the Affordable Care Act,’ she said...

“According to Alan Trevithick, a professor at three colleges and an activist, universities got used to paying for cheap labor and putting their money elsewhere. High-profile spending has turned into a higher-education arms race, with universities pouring money into buildings, technology, academic star power, and administrative costs. Trevithick stressed that he believes this is the most relevant point of all—that universities aren’t paying fair wages to adjuncts because they don’t want to, not because they can’t…”

“Memories of the university as a citadel of democratic learning have been replaced by a university eager to define itself largely as an adjunct of corporate power. Civic freedom has been reduced to the notion of consumption, education has been reduced to a form of training, and agency has been narrowed to the consumer logic of choice legitimated by a narrow belief in defining one's goals almost entirely around self-interests rather than shared responsibilities of democratic sociability…” (Henry A. Giroux, Higher Education and the New Brutalism).

“We are the stoop laborers of higher education: adjunct professors. As colleges and universities rev for the fall semester, the stony exploitation of the adjunct faculty continues, providing cheap labor for America’s campuses, from small community colleges to knowledge factories with 40,000 students” (Colman McCarthy, Adjunct professors fight for crumbs on campus).

University and College Adjunct Faculty Remuneration per Course in Illinois:

Pay is based on three-credit courses.
A Sample:

The above information is from The Adjunct Project.