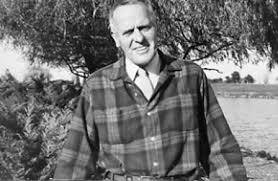 When I think of the time I have killed
the days I have murdered—
some that died easily—
days like phlegmatic fish that were ready to die,
days like sluggish birds
that would otherwise have been prey for cats,
tired, exhausted days like ponderous, rotten trees
or old dogs with sleep in their bones.

But even vital and lively days I have murdered,
stepped up behind them when they were their happiest,
at the peak of their vigor,
and slipped my knife of fine-tempered boredom
between their ribs
and watched with no emotion
as they slumped to the ground.

And often,
usually in the cold grey of winter
or when rain came as a depressing drizzle,
I would take a day up to my apartment
and we would have a snack and talk
and listen to music
and then we would stretch out on the studio couch
still talking and thinking
until I, sometimes against my will,
would hold a pillow over the day’s face
until all breathing stopped.

Some days died hard—
days I would ply with liquor and bludgeon to death
or poison with special emotions I had developed.
Some I even starved to death,
locked them up in parlors of puritan Sundays
which became stone towers
with moats of abstinence around them
and let them rot with television and bridge.

The days of summer I treated most gently.
I would always choose one of exceptional beauty
and we would lie for hours on the warm beach
turning slowly, slowly,
facing the orange sun as it moved through the sky
and then, just before dusk,
I would suggest that we go for one last swim
and we would step into the cool water
and wade past the breakers
and swim out, out past the sandbars and buoys
to a spot as deep green as dark moss
and we would tread water for a few moments
and look up at the first star
and then, as the trace of color drained from the sky,
I would press the day’s head down under the waves,
waiting until the bubbles stopped showing
before I would swim back to shore alone.

Of course there was some remorse at first—
in autumn with its anguish of leaves turning brown
or in winter with its finality of ice—
when I would think back with a sense of loss
for all the beautiful days I’d destroyed,
though lately such qualms no longer disturb me.

But I know I’m almost finished;
there is not much time left to kill
and there are fewer days that I care to murder.
Besides, I have been so careless with these crimes—
someone is certain to find the skeleton
of a murdered day wedged between the rocks
or the hand of a mutilated day
protruding from the ground
with some incriminating clue nearby,
like my glove or my comb or the print of my shoe,
and I will be apprehended at last
and locked up with days and days and days
that will sooner or later
torture me to death.

In the land of the raised fist
the brandished rifle, the knife in the teeth
the screaming through streets of minaret and mosque
to keep alive the ancient hates
one man abandons for a day
those idiotic acts of history
and follows his neglected path
through narrow streets of donkeys and shops
to the silken rooms of his black-haired woman,
her eyes of camel and sand
of stars of flame in the dome of night
and speaks to her of fertile oasis
as she draws the shade and shuts the door.

In the land of toppled statues and the iron rose,
of formations of bombers in the perfect sky,
of parades of ponderous bombs through the square,
through the closely guarded streets,
one man ignores for awhile
the stupid seriousness of history
and goes with longing in his eyes
through streets of laundry and Slavic steeples
through neighborhoods of onion-shaped roofs
to the dark varnished rooms of his heavy-thighed woman,
her eyes of samovars and hardwood forests
of lake ice cracking in the spring
and speaks to her of stars on the Volga
as she draws the shade and shuts the door.

In the land of crowded subways and highway rush
of news of wars and soldiers somewhere else
and security under the missile-webbed skies
one man forsakes for a day
the frightening twists of history
and goes, as he’s been wanting to,
through streets of traffic and flashing signs
through neighborhoods of fenced-in lawns
the house-broken dogs and secretive cats
to the tidy rooms of his cluttered woman,
her eyes of typewriters and drug store breakfasts
of dances danced and evenings alone
and speaks to her of a lake in Wisconsin
as she draws the shade and shuts the door.

Email ThisBlogThis!Share to TwitterShare to FacebookShare to Pinterest
Labels: miss you, poets