Where Demons Come From 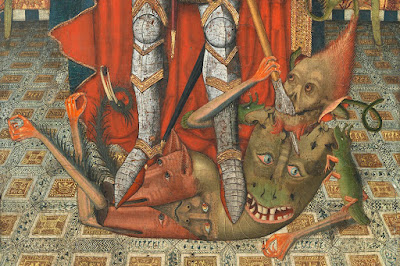 “[This time of year] brings a familiar array of spooky characters: ghosts, witches, zombies, goblins, and demons. But what is a demon, anyway? Christians today often describe them as fallen angels, minions of the most famous ex-angel of all, Satan. But New Testament scholar Dale Basil Martin writes that  ‘there was no such connection in ancient Jewish thought, or even among the first Christians.’

“According to Martin, the ancient Greeks used the word daimon to refer to gods, especially minor gods or intermediate supernatural beings, as well as the souls of the dead. A daimon might also be a supernatural entity that causes disease, or the disease itself. Daimons could possess humans, causing madness. But philosophers generally saw daimons as exclusively good. And even regular people viewed them not as evil incarnate but as capricious creatures who needed sacrifices to mollify them.

“There are a few cases in pre-Christian texts in which angels have a connection with something like demons. When ancient scribes translated the Hebrew Bible into Greek, they used ‘daimon’ for Hebrew terms referring to a number of different concepts, including pagan gods, human-animal hybrids, and diseases. But notably, they didn’t use ‘daimon’ to mean angel, even though supernatural creatures acting as intermediaries between humans and the divine fit neatly with the word’s meaning to ancient Greeks.

“Why? Martin writes that there are a couple of reasons. First, to Greek-speaking Jews, daimons were gods of other nations, not creatures within their religion. And second, the translators might have wanted to avoid suggesting that angels were anything like minor gods.

“There are a few cases in pre-Christian texts in which angels have a connection with something like demons. In the ancient Jewish text of the Book of Enoch, ‘watchers’—or angels—mate with human women, producing giants. When those giants are killed, their souls become ‘evil spirits.’ And in the Qumran documents—better known as the Dead Sea Scrolls—the ‘spirit of injustice’ is either identified with or led by the ‘Angel of Darkness.’

“In the New Testament, the gospels of Matthew, Mark, and Luke begin to equate demons with evil spirits. They also unify the figures of Satan, the devil, and Beelzebub. Luke refers to Satan ‘falling from heaven,’ while Matthew mentions ‘the devil and his angels.’

“‘By combining these different references—the fall of Satan from Luke, with the reference to the devil and his angels from Matthew, with the Beelzebub story making Satan the ruler of the demons—we come up with the different elements of the later belief that Satan is the prince of fallen angels who are identical with demons,’ Martin writes.

“But it was only in the second half of the second century CE that Assyrian Christian theologian Tatian fully identified demons as the ‘arch-rebel’ Satan and the fellow angels who followed him in his banishment. Martin suggests that understanding how ancient Jews and Christians viewed angels and demons ‘may spark our imaginations to think anew about the cosmos and cosmic demography.’ It might provide inspiration for some new Halloween costumes, too.”