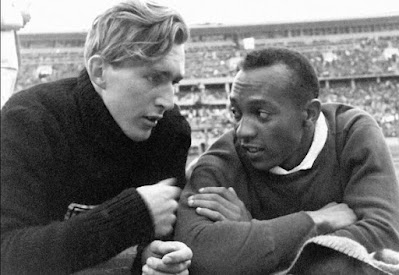 Owens with Long at Olympic Games, Berlin, 1936
"It took a lot of courage for him to befriend me in front of Hitler.… You can melt down all the medals and cups I have and they wouldn’t be a plating on the 24-karat friendship I felt for Luz Long at that moment. Hitler must have gone crazy watching us embrace. The sad part of the story is I never saw Long again." - J.C. Owens
"Back home, ticker tape parades feted Owens in New York City and Cleveland. Hundreds of thousands of Americans came out to cheer him. Letters, phone calls, and telegrams streamed in from around the world to congratulate him. From one important man, however, no word of recognition ever came. As Owens later put it, 'Hitler didn’t snub me; it was our president who snubbed me. The president didn’t even send a telegram.' Franklin Delano Roosevelt...couldn’t bring himself to utter a word of support...FDR invited all the white US Olympians to the White House, but not Jesse.
"'It all goes so fast, and character makes the difference when it’s close,' Owens once said about athletic competition. He could have taught FDR a few lessons in character, but the president never gave him the chance. Owens wouldn’t be invited to the White House for almost 20 years — not until Dwight Eisenhower named him 'Ambassador of Sports' in 1955.' -Lawrence Reed
"Luz Long died in 1943 while fighting for Germany in World War II. A final letter he wrote to Jesse Owens reads, in part, 'I am here, Jesse, where it seems there is only the dry sand and wet blood. I do not fear so much for myself, my friend Jesse, I fear for my woman who is home, and my young son Karl who has never really known his father. My heart tells me, if I be honest with you, that this is the last letter I shall ever write. If it is so, I ask you [for] something. It is a something so very important to me. It is [for] you [to] go to Germany when this war [is] done; someday find my Karl, and tell him about his father. Tell him, Jesse, what times were like when we [were] not separated by war. I am saying—tell him how things can be between men on this earth.'" -Your brother, Luz 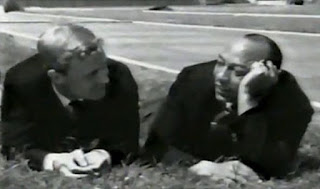 Jesse Owens years later with Long's son
Posted by gbrown at 9:13 AM