"St. Jude Children’s Research Hospital promises not to bill families. But the cost of having a child at the hospital for cancer care leaves some families so strapped for money that parents share tips on spending nights in the parking lot" (ProPublica) 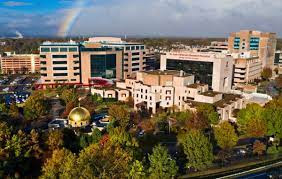 “…St. Jude is the largest and most highly regarded health care charity in the country. Each year, the Memphis hospital’s fundraisers send out hundreds of millions of letters, many with heart-wrenching photographs of children left bald from battling cancer. Celebrities like Jennifer Aniston and Sofia Vergara sing the hospital’s praises in televised advertisements. This year, St. Jude’s fundraising reached outer space. The SpaceX Inspiration4 mission in September included a former St. Jude patient as a crew member.

“Last year, St. Jude raised a record $2 billion. U.S. News & World Report ranked it the country’s 10th-best children’s cancer hospital, and St. Jude raised roughly as much as the nine hospitals ahead of it put together. It currently has $5.2 billion in reserves, a sum large enough to run the institution at current levels for the next four and a half years without a single additional donation. St. Jude makes a unique promise as part of its fundraising: ‘Families never receive a bill from St. Jude for treatment, travel, housing or food — because all a family should worry about is helping their child live.’

“But for many families, treatment at St. Jude does not relieve all the financial burdens they incur in getting care for their children, including housing, travel and food costs that fall outside the hospital’s strict limits, a ProPublica investigation has found.

“While families may not receive a bill from St. Jude, the hospital doesn’t cover what’s usually the biggest source of financial stress associated with childhood cancer: the loss of income as parents quit or take leave from jobs to be with their child during treatment. For many families, the consequence is missed payments for cars, utilities and cellphones. Others face eviction or foreclosure because they can’t keep up with rent and mortgage payments.

“Parents at St. Jude have exhausted savings and retirement accounts, borrowed from family and friends or asked other charities for aid. ProPublica identified more than 100 St. Jude families seeking financial help through the online fundraiser GoFundMe, with half of the campaigns started in the past two years. We counted scores of other events like concerts and yard sales organized to help St. Jude families in need.

“One family relied on a mixed martial arts fighter to help raise money for expenses like car repairs and cellphone bills, items that St. Jude would not cover. Another spent $10,000, originally saved to purchase a home, on costs related to treatment at St. Jude.

“Only about half of the $7.3 billion St. Jude has received in contributions in the past five fiscal years went to the hospital’s research and caring for patients, according to its financial filings with the Internal Revenue Service. About 30% covered the cost of its fundraising operations, and the remaining 20%, or $1 of every $5 donated, increased its reserve fund.

“Further, ProPublica found, a substantial portion of the cost for treatment is paid not by St. Jude but by families’ private insurance or by Medicaid, the government insurance program for low-income families. About 90% of patients are insured, bringing in more than $100 million in reimbursements for treatment a year. If a family shows up at St. Jude without insurance, a company hired by the charity helps them find it. St. Jude does cover copays and deductibles, an unusual benefit.

“St. Jude spends about $500 million a year on patient services — a figure that includes all medical care and other assistance. Very little of what St. Jude raises from the public goes to pay for food, travel and housing for families, the investigation found. Last year, it was 2% of the money raised, or nearly $40 million.

“In written responses to ProPublica, lawyers for St. Jude and its fundraising arm, the American Lebanese Syrian Associated Charities, or ALSAC, emphasized that countless families have benefited from the charity provided since the hospital opened its doors in 1962. ‘ProPublica should be celebrating St. Jude and ALSAC for their commitment to finding cures, saving children’s lives, and optimizing patient outcomes,’ one of their letters said.

“It is unquestioned that St. Jude has helped thousands of children and their families over the decades. Patients have offered scores of testimonials about the hospital’s generosity and care. ‘This often comes as a huge relief to families who often expect to sell all their belongings just so their children can get the medical care and treatment they need to save their lives,’ the hospital’s lawyers wrote. ‘St. Jude and ALSAC understand that this arrangement cannot cover all financial obligations of all families, nor can St. Jude or ALSAC shield families from all the financial and emotional effects” of a child’s illness.’

“St. Jude said it discloses the limits of its aid to families on its website and in material provided to those whose children are admitted to the hospital. That includes the rule Burt ran into, that the hospital covers the travel and housing costs of only one caregiver and one patient. For many families, the daily food budget is capped at $50. In some cases, hotel stays en route are provided only if families travel more than 500 miles to get to St. Jude.

“St. Jude said its assistance is ‘based on guidelines to ensure fairness and responsible use of donor funds’ and on remaining compliant with a federal anti-kickback statute that makes it a criminal offense to offer something of value to induce a medical referral. St. Jude declined to explain how the law affects the amount or type of financial assistance it provides to families. ‘St. Jude has never promised anyone — neither patients nor the public in general — that it can solve all financial problems,’ the letter said.

“When parents need additional financial help, St. Jude’s social workers often send them to smaller charities or in some cases suggest that they apply for government aid. They refer many to the Andrew McDonough B+ Foundation, which gives more than $2.5 million a year in grants to thousands of families of pediatric cancer patients at hospitals across the country to help cover rent, utilities and other urgent expenses.

“Joe McDonough, the foundation’s founder and president, said St. Jude families have the same money problems as families of patients at other children’s hospitals, even though he said St. Jude’s marketing creates the public perception that it alleviates these burdens.

“‘People say to me, ‘Why are you helping St. Jude families?’ McDonough said. ‘Well, what happens when a family lives in Augusta, Georgia, and they’re being treated at St. Jude? They still have to pay the rent on their apartment back in Augusta, Georgia. They still have to make their car payment. And it’s not my position to say whether St. Jude should be paying for all those expenses or not. I’m just explaining that it’s not a totally free ride.’ The help St. Jude provides to families may soon be increasing…

“Today, St. Jude is a specialty treatment and research center with about 5,700 employees and 73 beds. Other top children’s hospitals have more staff and beds, and they also treat more conditions. Though St. Jude raises money across the world, most of its patients come from Tennessee and surrounding states. Patients from elsewhere are usually enrolled in clinical trials.

“ALSAC, which handles St. Jude’s fundraising and investments, has 2,188 employees in Memphis and in 36 regional offices across the country. More than 400 of the fundraising arm’s employees are paid over $100,000, according to IRS filings. The charity takes in so much money each year that it regularly steers hundreds of millions of dollars in donations to reserve accounts, the filings show.

“Overall, St. Jude’s reserve has grown by 58% over the past five fiscal years, during which it has added $1.9 billion to its investment accounts and shifted its portfolio toward financial products designed to generate bigger returns than stocks, bonds and mutual funds traditionally deliver. The charity stowed more than a third of the new surplus, $688 million, in riskier private equity investments. IRS rules do not limit the size of a nonprofit’s reserves, and experts on charitable finance differ on best practices…”

For the complete article, click here: St. Jude Hoards Billions While Many of Its Families Drain Their Savings — ProPublica