“Just a few companies are making millions of dollars in profit every single hour, while just two percent of people in low-income countries have been fully vaccinated against coronavirus” -Jake Johnson, Common Dreams 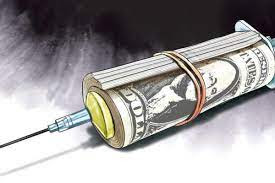 Moderna, Pfizer, and BioNTech—the makers of the two most successful coronavirus vaccines—are raking in a combined $65,000 in profits every minute as they refuse to share their manufacturing recipes with developing countries, where billions of people still lack access to lifesaving shots.

According to a new People's Vaccine Alliance analysis of recent earnings reports, the three pharmaceutical giants have made a total of $34 billion in profits this year, which amounts to roughly $1,083 per second, $64,961 per minute, or $3.9 million per hour.

"It is obscene that just a few companies are making millions of dollars in profit every single hour while just two percent of people in low-income countries have been fully vaccinated against coronavirus," said Maaza Seyoum of the People's Vaccine Alliance Africa. "Pfizer, BioNTech, and Moderna have used their monopolies to prioritize the most profitable contracts with the richest governments, leaving low-income countries out in the cold."

Moderna—a Massachusetts-based company that developed its vaccine with the help of government research and around $10 billion in taxpayer funding—has delivered just 0.2% of its total vaccine supply to low-income countries, the People's Vaccine Alliance estimates. The coronavirus vaccine is Moderna's only product on the market.

Pfizer and its Germany-based partner BioNTech—whose vaccine was also helped along by taxpayer money—haven't done much better than their competitor, sending less than 1% of their supply to poor nations while profiting hugely from sales to rich countries.

"Predominantly, right now, we have already signed orders, and those are with high-income countries," Pfizer CEO Albert Bourla recently said of coronavirus vaccine sales for next year, blaming poor countries for not ordering shots quickly enough. "We are negotiating right now with few middle-income countries, and with even fewer low-income countries," Bourla said.

But public health campaigners argue that bilateral deals and vaccine donations are not sufficient to bring production and distribution into line with global needs. Instead, they say, pharmaceutical giants must relinquish their vaccine recipes and allow qualified manufacturers around the world to produce low-cost generic versions for their populations.

Moderna and Pfizer-BioNTech have thus far refused to do so—and lobbied aggressively against a World Trade Organization proposal to temporarily suspend vaccine patents. Bourla, for his part, has dismissed technology-transfer proposals as "dangerous nonsense."

"Contrary to what Pfizer's CEO says, the real nonsense is claiming the experience and expertise to develop and manufacture lifesaving medicines and vaccines does not exist in developing countries," Anna Marriott, health policy manager at Oxfam International, said in a statement Tuesday. "This is just a false excuse that pharmaceutical companies are hiding behind to protect their astronomical profits."

"It is also a complete failure of government to allow these companies to maintain monopoly control and artificially constrain supply in the midst of a pandemic while so many people in the world are yet to be vaccinated," she added.

Facing backlash for fueling massive inequities in vaccine distribution, Moderna on Tuesday announced a deal that will allow the European Union and European Economic Area countries to donate coronavirus vaccine doses that they purchased from the company to COVAX, the World Health Organization-backed vaccination initiative.

The agreement was met with derision from vaccine equity campaigners. "Goodness, how generous," responded Nick Dearden, director of the U.K.-based advocacy group Global Justice Now. "Most people will simply be astounded that you were stopping them from doing this in the first place. Why don't you, instead, share your publicly funded vaccine recipe with the WHO?" he added. "That might actually help."

In a letter to Moderna's billionaire CEO Stéphane Bancel on Tuesday, a coalition of nearly 90 civil society organizations wrote that "we are in no doubt that most Covid-19 deaths in low-income countries are now avoidable deaths: lives that could be saved were effective vaccines, none more than [Moderna's], widely available to their populations."

The groups called on Moderna to transfer its vaccine technology to qualified manufacturers through the WHO to ramp up global vaccine production and to commit to selling its shot to low-income countries at a not-for-profit price.

"So far, only about one million doses of mRNA-1273 have gone to low-income countries and Moderna has shipped a greater share of doses to wealthy countries than any other Covid-19 vaccine manufacturer," the groups noted. "Our analysis suggests that at scale, a not-for-profit price for mRNA-1273 would be no greater than $3 per dose."

Peter Maybarduk, director of the Access to Medicines program at Public Citizen—one of the groups behind the letter—said Tuesday that Moderna "lags behind even its recalcitrant Big Pharma counterparts when it comes to offering a dose of compassion to the world in this time of need."

"The Biden administration and WHO have asked for Moderna's help, and so far Moderna largely has spurned them, despite the U.S. government's essential role developing the NIH-Moderna vaccine and significant contributions to making Moderna executives billionaires," said Maybarduk. "It is past time to share the NIH-Moderna vaccine with the world."