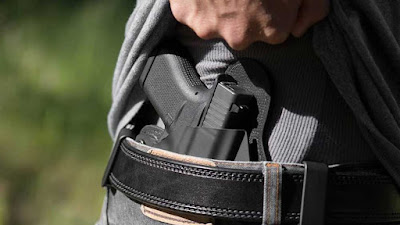 U.S.A. –-(AmmoLand.com)- We start with this local news story from Chicago, Illinois as covered by the Chicago Sun-Times newspaper.

It is just after lunch when you walk to your car. Your car is parked in a covered garage behind your house. You’re standing in your garage when a car rolls up the alley and stops behind your car so you can’t get out. A stranger gets out of the car and asks you a question. The stranger also has a gun in his hand and the gun is pointed at you. Now the stranger tells you to give him everything you have.

One of the things you have is an Illinois Firearms Owners Identification card in your wallet. You also have a concealed firearm on your hip. You stall for time and then present your handgun. You shoot your attacker in the chest and the head. Your attacker drops his gun so you stop shooting.

You stay at the scene and call 911. You holster your firearm before the police arrive.

You tell the police what happened. Police take your attacker’s gun as evidence. Emergency Medical Services declare your attacker dead at the scene. You’re a 77-year-old retired fire captain. You are not charged.

This defender had a plan for his safety. He watched patterns of crime in his area. He knew that he was not safe even when he was on his own property in the middle of the day. He went through the trouble and cost of getting his Illinois Firearms Owners Identification card. He found a firearm that fit him and went through the cumbersome process of buying it in Illinois. He took the required concealed carry classes, though he had to leave Chicago to find a shooting range where he could do the live fire portion of the class. He applied for his carry permit. He learned armed defense. That legacy let him carry a concealed firearm at home, though he might have been going somewhere in his car. The story isn’t clear on that point.

This man’s defense started well before someone pulled a gun on him that day.

Our defender is extraordinary, yet this is another “everyman” story. Half of all violent assaults are on or near our home. That may seem odd but think of the situation from the criminal’s perspective. We spend more than half of our time in and near our home. Criminals hunt for victims, and near our home is where they find us half the time. Criminals look for us, and that is why I want you to put your gun on when you get dressed in the morning.

We are all glad that the defender protected himself with his firearm. He had every right to do so. The victim faced an immediate threat when the robber presented his gun and pointed it at him. The threat was unavoidable since the victim could not outrun a bullet. Any firearm is a lethal threat, though some might take longer to kill us than others. Our defender had both a legal and a moral right to use lethal force in that moment.

This story sounds like a perfect defense. It may have been, but the news article leaves out some important points. We want to do more than end the threat; we want to not get shot. That is why we want to move and move towards cover as we present our gun. We want to cheat and have an unfair advantage.

This story might have looked something like this when the attacker already had his gun out and pointed at the defender. It is winter in Chicago, so we have to open our jacket to empty our pockets. We want to put our keys and change on the car next to us. Then we back up. As the robber steps forward and takes our keys, we put our phone on the car roof. Then we step back again and reach for our back pocket. This time, as the robber looks over at our phone, we move behind the front of the car. In the same motion we present our firearm from concealment. Now we shoot the robber until he drops his gun or we until run out of ammunition.

Coordinated actions like that are impossible to consider, to evaluate, and to choose in the moment. We simply don’t have the time or mental focus. Having a plan keeps us from freezing in place when we can’t think. We don’t invent our defense so much as we select from a set of actions we’ve already examined and rehearsed. We’ve already answered and practiced what we should do if we have a gun pointed at us. We usually cover those aspects of armed defense in the classes that come after the concealed carry class. There is always more to learn.

Sooner or later, we will be in the defender’s shoes. This defender was an older retired gentleman. The robber chose him in particular because the robber thought this man would make an easy victim. There are lots of things that make us more vulnerable to attacks.

Criminals make simple choices when they search for victims. Are we carrying bags in our hands as we walk across the parking lot? We might be pushing a stroller or have our head down in our phone. Are you or your friends wearing nice clothes and unsteady on your feet as you leave a bar at closing time?

I was more vulnerable when I hurt my ankle and walked with a limp. We will all look like easy victims if we live long enough.

One of my readers saw this story and made an insightful comment. Since this attack happened in the early afternoon, the robber was probably cruising neighborhoods looking for easy victims. Who knows how many other crimes he would have committed that day if the defender had not stopped him.

I’ll say thank you to that reader, and to the 77-year-old retiree who protected himself that day. You have my thanks if you plan ahead and carry concealed even on days you don’t feel like it.

Rob Morse highlights the latest self-defense and other shootings of the week. See what went wrong, what went right, and what we can learn from real-life self-defense with a gun. Even the most justified self-defense shooting can go wrong, especially after the shot. Get the education, the training, and the liability coverage you and your family deserve, join USCCA.

Rob Morse writes about gun rights at Ammoland, at Clash Daily, at Second Call Defense, and on his SlowFacts blog. He hosts the Self Defense Gun Stories Podcast and co-hosts the Polite Society Podcast. Rob was an NRA pistol instructor and combat handgun competitor.