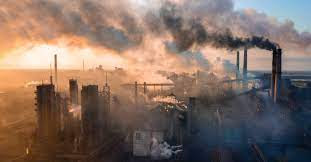 “From the urban sprawl of Houston to the riverways of Virginia, air pollution from industrial plants is elevating the cancer risk of an estimated quarter of a million Americans to a level the federal government considers unacceptable. Some of these hot spots of toxic air are infamous. An 85-mile stretch of the Mississippi River in Louisiana that’s thronged with oil refineries and chemical plants has earned the nickname Cancer Alley. Many other such areas remain unknown, even to residents breathing in the contaminated air.

“Until now. ProPublica undertook an analysis that has never been done before. Using advanced data processing software and a modeling tool developed by the Environmental Protection Agency, we mapped the spread of cancer-causing chemicals from thousands of sources of hazardous air pollution across the country between 2014 and 2018. The result is an unparalleled view of how toxic air blooms around industrial facilities and spreads into nearby neighborhoods.

Click Here: The Most Detailed Map of Cancer-Causing Industrial Air Pollution in the U.S.

“At the map’s intimate scale, it’s possible to see up close how a massive chemical plant near a high school in Port Neches, Texas, laces the air with benzene, an aromatic gas that can cause leukemia. Or how a manufacturing facility in New Castle, Delaware, for years blanketed a day care playground with ethylene oxide, a highly toxic chemical that can lead to lymphoma and breast cancer.

“Our analysis found that ethylene oxide is the biggest contributor to excess industrial cancer risk from air pollutants nationwide. Corporations across the United States, but especially in Texas and Louisiana, manufacture the colorless, odorless gas, which lingers in the air for months and is highly mutagenic, meaning it can alter DNA.

“In all, ProPublica identified more than a thousand hot spots of cancer-causing air. They are not equally distributed across the country. A quarter of the 20 hot spots with the highest levels of excess risk are in Texas, and almost all of them are in Southern states known for having weaker environmental regulations.

“After reviewing ProPublica’s map, Wayne Davis, an environmental scientist formerly with the EPA’s Office of Chemical Safety and Pollution Prevention, said, ‘The public is going to learn that EPA allows a hell of a lot of pollution to occur that the public does not think is occurring.’

“Our analysis comes at a critical juncture for the fate of America’s air. After decades of improvement, air quality has, by some metrics, begun to decline. In the last four years, the Trump administration rolled back more than a hundred environmental protections, including two dozen air pollution and emissions policies.

“The EPA says it ‘strives to protect the greatest number of people possible’ from an excess cancer risk worse than 1 in a million. That risk level means that if a million people in an area are continuously exposed to toxic air pollutants over a presumed lifetime of 70 years, there would likely be at least one case of cancer on top of those from other risks people already face. According to ProPublica’s analysis, 74 million Americans — more than a fifth of the population — are being exposed to estimated levels of risk higher than this.

“EPA policy sets the upper limit of acceptable excess cancer risk at 1 in 10,000 — 100 times more than the EPA’s more aspirational goal and a level of exposure that numerous experts told ProPublica is too high. ProPublica found that an estimated 256,000 people are being exposed to risks beyond this threshold and that an estimated 43,000 people are being subjected to at least triple this level of risk.

“Still, the EPA sees crossing its risk threshold as more of a warning sign than a mandate for action: The law doesn’t require the agency to penalize polluters that, alone or in combination, raise the cancer risk in an area above the acceptable level.

“In response to ProPublica’s findings, Joe Goffman, acting assistant administrator for the EPA’s Office of Air and Radiation, said in an emailed statement, ‘Toxic air emissions from industrial facilities are a problem that must be addressed.’ Under President Joe Biden’s administration, ‘the EPA has reinvigorated its commitment to protect public health from toxic air emissions from industrial facilities — especially in communities that have already suffered disproportionately from air pollution and other environmental burdens.’

“ProPublica’s reporting exposes flaws with EPA’s implementation of the Clean Air Act, a landmark law that dramatically reduced air pollution across America but provided less protection to those who live closest to industrial polluters.

“The 1970 law resulted in outdoor air quality standards for a handful of widespread ‘criteria’ pollutants, including sulfur dioxide and particulate matter, which could be traced to exhaust pipes and smokestacks all over the country and were proven to aggravate asthma and lead to early deaths.

“But 187 other dangerous chemicals, now known as hazardous air pollutants or air toxics, never got this level of attention. At the time, the science demonstrating the harms of these compounds, which primarily impact people in neighborhoods that border industrial facilities — so-called fence-line communities — was still in its early stages. The EPA did not receive enough funding to set the same strict limits, and industry lobbying weakened the agency’s emerging regulations.

“In 1990, Congress settled on a different approach to regulating air toxics. Since then, the EPA has made companies install equipment to reduce their pollution and studied the remaining emissions to see if they pose an unacceptable health risk.

“The way the agency assesses this risk vastly underestimates residents’ exposure, according to our analysis. Instead of looking at how cancer risk adds up when polluters are clustered together in a neighborhood, the EPA examines certain types of facilities and equipment in isolation. When the agency studies refineries, for example, it ignores a community’s exposure to pollution from nearby metal foundries or shipyards.

“Matthew Tejada, director of the EPA’s Office of Environmental Justice, told ProPublica that tackling hot spots of toxic air will require ‘working back through 50 years of environmental regulation in the United States, and unpacking and untying a whole series of knots.’

“T​​he cancer-causing air emissions from these five corporations cover more populated square miles than the emissions from any other companies, according to our analysis.

“Most of these companies did not comment; Eastman said, ‘Not all risk is due to industrial activity, however, we continue to do our part to reduce risk and emissions to ensure the safety of our local community.’

“‘The environmental regulatory system wasn’t set up to deal with these things,’ he said. ‘All of the parts of the system have to be re-thought to address hot spots or places where we know there’s a disproportionate burden.’

“The Clean Air Act rarely requires industry or the EPA to monitor for air toxics, leaving residents near these plants chronically uninformed about what they’re breathing in. And when companies report their emissions to the EPA, they’re allowed to estimate them using flawed formulas and monitoring methods.

“‘These fence line communities are sacrifice zones,’ said Jane Williams, executive director of California Communities Against Toxics. ‘Before there was climate denial, there was cancer denial. We release millions of pounds of carcinogens into our air, water and food and act mystified when people start getting sick’…”

Poison in the Air — ProPublica

This story was originally published by ProPublica.