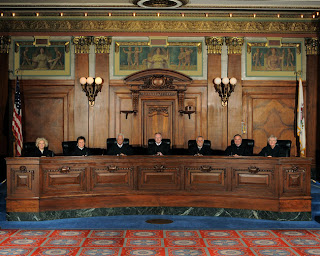 The Illinois Constitution of 1970:

Rita B. Garman was born in Aurora… She received her B.S. degree in economics with highest honors from the University of Illinois in 1965, Bronze Tablet, and her J.D. degree with distinction from the University of Iowa, College of Law in 1968. She was Assistant State's Attorney in Vermilion County (1969-73); she was engaged in private practice with Sebat, Swanson, Banks, Lessen & Garman (1973) and was an Associate Circuit Judge for 12 years. She was a Circuit Judge in the Fifth Judicial Circuit (1986-95) and Presiding Circuit Judge (1987-95). She was assigned to the Appellate Court, Fourth District, in July 1995 and was elected to the position in November 1996.  Justice Garman was appointed to the Supreme Court on February 1, 2001 and elected to the Court on November 5, 2002…

Thomas L. Kilbride was born in LaSalle. He received a B.A. degree magna cum laude from St. Mary's College in Winona, Minnesota in 1978 and received his law degree from Antioch School of Law in Washington, D.C., in 1981. Justice Kilbride practiced law for 20 years in Rock Island, engaging in the general practice of law, including appeals, environmental law, labor law, employment matters, and other general civil and criminal matters. He was admitted to practice in the United States District Court of Central Illinois and the United States Seventh Circuit Court of Appeals. He was elected to the Supreme Court of Illinois for the Third District in 2000 and was elected as Chief Justice of the Illinois Supreme Court in October, 2010…

Charles E. Freeman is a resident of the City of Chicago. He graduated from Virginia Union University in Richmond, VA, with a B.A. degree in liberal arts in June 1954. He received his J.D. degree from the John Marshall Law School in Chicago in February 1962…  Justice Freeman engaged in the general practice of law from 1962 to September 1976 when he was elected to the Circuit Court. Justice Freeman is a member of the Cook County, Illinois State and DuPage County Bar Associations, the Illinois Judicial Council, the Illinois and American Judges' Associations and the American Judicature Society. He has received numerous awards throughout his career. He was elected to the Illinois Supreme Court on Nov. 6, 1990, as the first African-American to serve on the Court. On May 12, 1997, he was selected as Chief Justice and served in that capacity until January 1, 2000.

Robert R. Thomas was born on August 7, 1952, in Rochester, NY. He received his B.A. degree in Government from the University of Notre Dame in 1974… He received his J.D. degree from Loyola University School of Law in 1981. He was elected Circuit Court Judge in DuPage County in 1988. He presided over civil jury trials and was the Acting Chief Judge from 1989 to 1994. In 1994, he was elected to the Appellate Court Second District. On December 4, 2000, Justice Thomas was sworn in as the Illinois Supreme Court Justice for the Second District. Justice Thomas was elected to serve as Illinois Supreme Court Chief Justice on September 6, 2005 and served as the Chief Justice until September 5, 2008. In April 1996, Justice Thomas was inducted into the Academic All-American Hall of Fame, and in January 1999 he received the prestigious NCAA Silver Anniversary Award…

Lloyd A. Karmeier was born January 12, 1940… He received his B.S. degree in 1962 and his J.D. degree in 1964, both from the University of Illinois… He was engaged in the general practice of law with the firm of Hohlt, House, DeMoss & Johnson from 1964 to 1986. He was resident Circuit Judge of Washington County from 1986 to 2004, when he was elected to the Illinois Supreme Court. Justice Karmeier is a member of the Illinois Judges' Association, the Washington County, St. Clair County, East St. Louis and Illinois State Bar Associations, and past member of the American Bar Association and the American Judicature Society. He served as a member of the Assembly of the Illinois State Bar Association from 1996 to 2002 and as chair of the Bench and Bar Section Council. He also served on the Illinois Supreme Court Committee on Pattern Jury Instructions in Criminal Cases, chairing the committee from 2003 to 2004…

Anne M. Burke was born on Feb. 3, 1944, in Chicago. She received her B.A. degree in education from DePaul University in 1976 and her J.D. degree from IIT/Chicago-Kent College of Law in 1983. She was admitted to the Federal Court, Northern District of Illinois in 1983; the United States Court of Appeals for the 7th Circuit in 1985; and certified for the Trial Bar, Federal District Court in 1987. In that same year, Governor James Thompson appointed her Judge to the Court of Claims and, in 1991, she was reappointed by Governor Jim Edgar. In April 1994, she was appointed special counsel to the Governor for Child Welfare Services. In August 1995, she was appointed to the Appellate Court, First District. In 1996, she was elected to the Appellate Court, First District, for a full term…

Mary Jane Theis was born in Chicago. She received her bachelor's degree from Loyola University Chicago in 1971 and her law degree from the University of San Francisco, School of Law in 1974. From 1974-83, she was an Assistant Public Defender in Cook County. Justice Theis has served at every level of the Judiciary in the State of Illinois. In 1983, she was appointed an Associate Judge in the Circuit Court of Cook County, where she served for five years. In 1988, Justice Theis was elected to the Circuit Court, where she was assigned to both the Criminal and Chancery Divisions until 1993, when she was appointed to the Appellate Court, First District. She was elected to the Appellate Court in 1994. When Chief Justice Thomas R. Fitzgerald retired in 2010, the Supreme Court appointed Justice Theis to fill his vacancy on the Court. In her 17 years on the Appellate Court, Justice Theis served as a Presiding Judge. She was Committee Chair of both the Committee on Judicial Education and the Committee on Judicial Conduct of the Illinois Judicial Conference, and a member of the Supreme Court Rules Committee…

For a review of the antedated Supreme Court cases regarding violating Article XIII, Section 5 of the Illinois State Constitution: Antedated Court Cases: Challenging the Pension Clause…

The Illinois Supreme Court information is from http://www.state.il.us/court/SupremeCourt/meetsupremecourt.asp
and http://judgepedia.org/index.php/Illinois_Supreme_Court