Beware of the Trojan Horse that is SB 2404 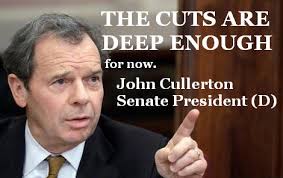 “…Eligible Tier I employees and eligible Tier I retirees may be required to make contributions toward the cost of coverage under a program of health benefits. The vested and enforceable contractual right to a program of health benefits is NOT offered as, and shall NOT be considered, a pension or retirement benefit under Article XIII, Section 5 of the Illinois Constitution, the Illinois Pension Code, or any subsequent or successor enactment providing pension benefits…

“The Department shall coordinate with each retirement system administering an election in accordance with this amendatory Act of the 98th General Assembly to provide information concerning the impact of the election of health benefits. Each System shall include information prepared by the Department in the required election packet…


“The information in the election packet shall include a notice that states: ‘YOU ARE HEREBY ADVISED THAT THE PROGRAM OF HEALTH BENEFITS OFFERED IS FOR ACCESS TO A GROUP HEALTHCARE PLAN ADMINISTERED BY THE DEPARTMENT, AND YOU MAY BE REQUIRED TO PAY FOR THE FULL COST OF COVERAGE PROVIDED BY THE PLAN, INCLUDING ALL PREMIUM, DEDUCTIBLE, AND COPAY AMOUNT.’” [You are simply making a choice to diminish your constitutional benefits and rights. You will also be paying for your own healthcare].

The aforementioned quotations are from Senate Amendment 002 to Senate Bill 2404, pages 15-16.

Of Special Note:
[The health care option should be written into the Illinois Pension Code (40 ILCS 5/) to be considered a “benefit” protected by the Illinois Constitution. In this way, consideration would create a contractual cause of action for the full enforcement of that expectation – an irrevocable binding contract between the state (legislators) and public employees].

Regarding the current teachers 1% contribution to the Teachers Health Insurance Security: if a teacher chooses to keep his or her constitutional benefit (compounded COLA) instead of the precarious "access" to the Teachers Retirement Insurance Program, “There would NOT be a refund [for any past contributions], but a person would no longer contribute” –Cinda Klickna, IEA president.

It’s a lesson in semantics:

Though there are thousands of retirees across the state who will sink deeply into abject poverty without their compounded COLA, partially-paid-for health care or both, Cullerton and the Coalition of Unions are offering a choice for us to keep our compounded COLA, which is already constitutionally guaranteed or diminish this benefit voluntarily for “access” to a state health care program (that is under payment revision), and one that we will most likely have to fully subsidize before long. What should help alleviate our anxiety about this Machiavellian/Orwellian choice is the IEA stated they “would fight to protect the health insurance benefits of [its] members.” Now, don’t we feel much better now?

"It is safe to say that [the aforementioned] amendment [002] was revealed in committee, was discussed by Senate President John Cullerton, and was pushed by the Civic Committee of the Commercial Club of Chicago and Civic Federation" –Gary Elmen, president of the IRTA.

from IRTA Today:
The IRTA continues to oppose both SB1 and SB2404. SB2404 requires retired educators to choose between two options:

A quotation and reiteration for us to contemplate:
“The best deceptions are the ones that seem to give the other person a choice: your victims feel they are in control but are actually your puppets. Give people options that come out in your favor whichever one they choose. Force them to make choices between the lesser of two evils, both of which serve your purpose. Put them on the horns of a dilemma… Such is the power of giving people a choice, or rather the illusion of one, for they are playing with cards you have dealt them… For people who are choosing between alternatives find it hard to believe they are being manipulated or deceived; they cannot see that you are allowing them a small amount of free will in exchange for a much more powerful imposition of your own will” (Robert Greene, The 48 Laws of Power).