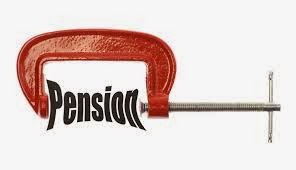 Regardless of the We Are One Illinois Labor Coalition’s acquiescence to modify public employees’ rights and benefits, SB 2404 remains what it is: “A unilateral reduction of pension rights [that might have been deemed] unconstitutional, even if coupled with equally unilateral benefits that the [Labor Coalition] imagines retired and active public employees might theoretically find desirable (4)…” (Gino L. DiVito, John M. Fitzgerald, and Katherine M. O’Brien of Tabet, DiVito & Rothstein LLC, Constitutional Issues Concerning Legislative Pension Reform Proposals, February 2013).

Many of us do not support a decision to cut benefits and rights already guaranteed by the State and U.S. Constitutions that some Illinois politicians choose to ignore. SB 2404 “attempts to extract a pretense of agreement from individual public employees and retirees to the reduction of their vested pension rights...; [SB 2404] forces a retiree to choose between pension rights and health care coverage. [This] rests upon an assumption that the State has an unlimited right to exclude a public employee or retiree from participation in a health insurance program.

“[Furthermore], in many cases, retired teachers have a vested contractual right to participate in a health plan by virtue of collective bargaining agreements between their unions and their school districts. As the Illinois Appellate Court has recognized, if a collective bargaining agreement between a teacher’s union and a school district promises health benefits to teachers in retirement for a term that extends beyond the agreement’s duration, the teachers who retired under that agreement have a vested right to the promised health benefits. [Read] Haake v. Board of Education for Township High School Glenbard District 87, 399 Ill. App. 3d 121, 132-34, 137-39 (2010) (6)…

“Vested contractual rights to health benefits in retirement cannot be taken away as a penalty for refusing to surrender vested pension rights. Accordingly, retired teachers who have vested rights to health coverage under their collective bargaining agreements could raise particularly strong legal challenges to… legislation that would eliminate their health coverage as a consequence of their refusal to surrender their vested pension rights.

“Moreover, an ‘agreement’ extracted from a retiree on the threat of losing his or her health coverage would hardly be the sort of voluntary undertaking that is necessary for a valid contractual modification (7)… More fundamentally, [SB 2404] and similar legislation effectively are mechanisms for circumventing the Pension Protection Clause. As explained in Kraus v. Board of Trustees of Police Pension Fund of the Village of Niles, 72Ill. App. 3d 833, 849 (1979), legislation ‘which has an incidental effect on the pensions which employees would ultimately receive, is not prohibited’ if it is ‘directed toward another aim.’

SB 2404 is an attempt to circumvent the “Pension Clause” by giving retirees and public employees a “choice” or “new consideration” to impair their own contract for a precarious state guarantee. Even John Stevens, Legal Consultant for the “We Are One” Labor Coalition, stated: “To take away the Cost-of-Living Adjustment [COLA] for [current and future] retirees is not a free and fair choice.” Has Stevens changed his mind because of the IEA?

The courts might have found the “illusory promise [of health care in exchange for a compounded COLA]… grossly inadequate and accompanied by unfairness because the employer [the state] is using its superior bargaining position to take undue advantage of the employee and substantially impair the employee’s exercise of free will” (250 Ill. App. 3d 423, 620 N.E.2d 1328, 1st Dist. 1993: footnote to Is Welching on Public Pension Promises an Option for Illinois? An Analysis of Article XIII, Section 5 of the Illinois Constitution by Eric M. Madiar, pg. 62).

Based upon both past and current legislators’ dereliction of duty to pay for the public employees’ constitutionally-guaranteed pensions, a court of law might have found that the Illinois General Assembly had been and is currently in “violation of any standard of good faith and fair dealing” (Professor of Law, Emeritus, Claude D. Rohwer and Professor of Law, Emeritus, Anthony M. Skrocki, Contracts in a Nutshell).

Modification of the “Pension Clause” might have been seen as a “result of a violation of fair dealing,” as an accommodation for “only” some members of the Illinois General Assembly who continuously steal money from the public pension systems and are, thus, “avoiding a pre-existing duty rule” (Rohwer & Skrocki).
According to National University of Singapore Professor Mindy Chen-Wishart, “The consideration doctrine is a moving target… Different [understandings] yield different [interpretations]… Each conception can be contradicted by another… Courts have considerable latitude in determining whether to find consideration (or not), and hence whether to enforce a promise (or not)… A contract supported by consideration can still be set aside for… misrepresentation, duress, or undue influence or its contents may be supplemented by implied terms or [be] partially invalidated because of unfairness. In these cases, the presence of serious inadequacy of consideration will usually be the major, although not the sole, factor… It would be highly undesirable to allow public officials to extract benefits in return for the performance of their existing legal duties” (Contract Law).

Ask legislators if they would make their so-called pension reform bills binding on themselves (if they had only one pension like public employees) and why they have excluded the state's judges.


There is no “Shared Sacrifice” when a governor rolls back the billionaire’s and millionaire’s taxes and then lacerates the state’s school budget and will diminish a public employee’s pension. There is no “Shared Sacrifice” when, for most teachers, their pension plan is their only retirement subsidy because they cannot receive Social Security benefits. There is no “Shared Sacrifice” when legislators who caused the fiscal morass want to change an existing constitutional contract to one that forces the state's public employees to accept an impairment and diminishment of their constitutionally-guaranteed pension and retirement benefits and rights. Sacrificing public employees does not address the state's antiquated revenue structure and the self-imposed state's pension debt problem.


Approximately 35,000 retirees are being deprived of an earned and promised benefit. They were not represented at the table when Cullerton and the Coalition made their agreement. They were excluded from the process that affects them. It’s ironic that it is the legislators who owe the outstanding obligations and not the public employees and retirees, and that Cullerton and the Coalition have decided public employees and retirees will provide consideration for the debt.

Illinois Pension Reform Is without Legal and Moral Justification (posted May 29, 2012)