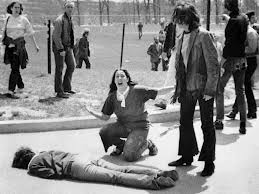 Premonitory, her outstretched arms
as she kneels in the spring sunlight,
the cry on her lips that will not
raise the boy lying dead before her.
How often has that image returned,
to fade and reappear, then fade again?
In Rwanda, in Grozny, Oklahoma . . .
Kabul, city of rubble and orphans.
And now the Capitol streets are closing,
an aroused militia at the gates –
the fences scaled by a stray gunman
for an enemy poised ever within.
We are asleep in the blurred ink
of our own newsprint, in the flicker
of our nightline images; in the fraying
voices of distracted candidates.
How long before that prone form rises,
to stand, confused and blinking
on the sunlit campus field; then fall
again in the blood we cannot see . . .
And that long-held cry of hers awakens,
to be heard at last over the stutter
of gunfire – in the grassy echo of a town,
a street, a house no longer there?

“We must look to the university that receives our children. Is it prepared to deal with the challenge of the non-democratic left? One modest suggestion for my friends in the academic community: the next time a mob of students, waving their non-negotiable demands, starts pitching bricks and rocks at the Student Union—just imagine they are wearing brown shirts or white sheets and act accordingly”(Davies, 1973).


A Statement from Major General Sylvester Del Corso at a press conference on May 3, 1970:


“As the Ohio law says, use any force that’s necessary even to the point of shooting. We don’t want to get into that but the law says that we can if necessary”(Davies).

“…The casualty nearest the Guardsmen was Joseph Lewis, some 20 yards away. He was wounded. Jeffrey Miller was struck in the head and killed. He was in the parking lot at Prentice Hall, a women’s dormitory at the base of the hill. He was 85 to 90 yards away. Allison Krause was 110 yards away in the parking lot. She ran a few feet before she fell dead. William Schroeder, an ROTC student and a spectator, and Sandra Lee Scheuer, on her way to class, were 130 yards away. Dean Kahler, shot in the back, [was] paralyzed. Donald Mackenzie, another of the wounded, was 250 yards away.

“Of the 13 casualties, seven were struck in the side and four in the back. Investigations showed no evidence for the Guard’s claim that their troops were being fired upon by a sniper…” (Kent State Remembered, Chicago Sun-Times, May 4, 1980).

“The indiscriminate firing of rifles into a crowd of students and the deaths that followed were unnecessary, unwarranted and inexcusable” (The Scranton Commission Report, appointed by the Federal Government).