“In their own self-interest, departments and faculty should strongly advocate to pay their adjunct faculty as high a per class wage as possible”—John Warner 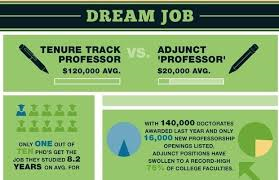 “…Many have turned at least a half-blind eye to the devaluation of the labor of teaching as long as it has been confined to general education courses, largely staffed by non-tenurable faculty. But in a world where public support of public higher ed continues to decline, where the professoriate is viewed by large swaths of the country as something between a political opponent and a fifth column traitor, where a U.S. senator in all seriousness proposes that a Ken Burns documentary can substitute for college credit in the interests of breaking up the ‘higher education cartel,’ you better believe that they’re coming for everyone and ‘tenure’ is a pretty poor shield.

“[We] often hear about the importance of ‘protecting tenured lines.’ [We] understand the rationale. These are the good jobs, the ‘real’ jobs, and it seems sensible to try to secure as many of them as possible. But in departments with significant reliance on adjunct labor, those ‘real’ positions are almost always at the expense of the untenurable. And yet the courses staffed by contingent faculty are no less real. They convey the same credit, cost the same tuition dollars.

“And let’s be clear. Over time, non-tenureable jobs are going to become the only jobs. Even if the current generation of tenured faculty survives, when it comes to higher education, there will be nothing remaining for the next generation.

“Departments that attempt to preserve the privileges of the tenured without considering the resulting effects on adjuncts and what their policies signal about the economic value of academic labor are signing their own death warrants. Disciplines (like English) where the number of majors has declined and the department largely exists to service gen ed writing courses have even started digging their own graves.

“Forget it. Some are dead and just don't know it. Don’t think about tenured or adjunct. Think about the work. In the eyes of the state and administrative bureaucrats and the laws of economics, [we] are all laborers. Do not kid [ourselves] otherwise.

“Decide what people should be paid for their labor – start by looking at what tenured faculty are paid for their teaching - and endeavor to achieve equity for adjuncts. Preserving the value of your labor is your best hope for survival. Hard? Yes. Impossible? We all better hope not.”


If Tenured Want to Survive, Pay Your Adjuncts by John Warner