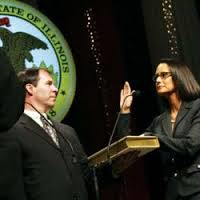 Madigan spoke about her personal experiences that led to her career and about the job description of an attorney general: she referred to herself as “legal officer of the State.” She talked about data and identity theft; she emphasized the concept of “social justice work,” and told students in attendance to “never give up hope” regarding their future. There was a brief time for queries after her speech. I stated the following comment, and then I asked her a question:

I presume that as the “legal officer of the State,” you will uphold the Illinois Constitution. This might entail safeguarding a contractual guarantee stated in Article XIII, Section 5, commonly known as the “Pension Clause” which states in part: Membership in any pension or retirement system of the State… shall be an enforceable contractual relationship, the benefits of which shall not be diminished or impaired. There are at least a dozen antedated court cases that have upheld this assurance.

Though these guarantees are currently in conflict with legislation that was sponsored by House Speaker Michael Madigan and passed in the House of Representatives and Senate on December 3rd, would you be representing the public employees’ and retirees’ constitutional guarantees; if yes, please explain how you will represent the public employees and retirees in Illinois.

Elected official Madigan responded: “I will be representing the State [but not its public employees]; I cannot comment on litigation in the media.”


For an interesting revised fairy tale, read John Kass' "…[T]he peasants owe $100 billion in unfunded state pension liabilities. Don't worry, they'll pay and they'll like it…” (from The story of the political princess and the pea).