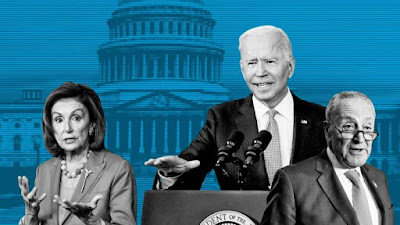 I am afraid that today’s Democratic Party’s ill-advised priorities, political stupidity, schizophrenic identity, split coalition, endless procrastination and vulnerable candidacies will enable the Republican Party to take over the House and Senate in 2022 and the presidency in 2024.

What Biden and the democratic leadership need to address before it is too late, besides the antiquated filibuster and Freedom to Vote Act, is the lack of unity in the Democratic Party (e.g. centrists Manchin and Sinema); Republican propagation of lies; the ongoing Republican subversion of the next elections; the Republican attempt to rigged the voting system in their favor; the Republican focus on voting in partisan supervisors for elections; Republican legislator purges; Republican sabotage of the U.S. mail system; Republican attacks on Medicare;  partisan gerrymandering; the pandemic and the effects on healthcare; inadequate testing, vaccine, and N-95 mask distributions; the unvaccinated and their effects on hospitals and the economy; the global demand for thermal energy; the climate crisis; the education and teacher crisis; cyber security; immigration reform; corporate corruption; pharmaceutical greed; rising American religious fundamentalism; wage stagnation, inflation and reflation; China, Russia, North Korea...

What Biden and the democratic leadership also need to address is an expansion of Medicare to include dental, vision and hearing benefits; an expansion of the Child Tax Credit; an ample reduction of prescription drug prices; the availability of healthcare for those who cannot afford it; the income inequality and unfair taxation of the wealthy elite, and the Build Back Better legislation, to name just a few.