What can historical “disruptions” of the past teach us today? 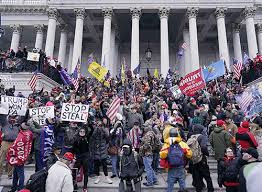 “…The core characteristics… of disruption… are that it: 1) stems from a loss of faith in a society’s central institutions; 2) establishes a set of ideas from what was once the fringe of the intellectual world, placing them at the centre of a revamped political order; and 3) involves a coherent leadership group committed to the change.
“These disruptions are apparent in, but not synonymous with, some of the events commonly called revolutions. Disruptions don’t always change who is in charge – they are, in fact, sometimes necessary to preserve a government that is on the verge of failure. But they will at the very least change the way that a governing group thinks and acts…
“…What can disruptions of the past – with their diverse outcomes – tell us today? The value of history is that it enables us to detect patterns of behaviour in the present that have had serious consequences in the past.
“Today, there are signs that the US and European liberal democratic systems are under threat. The most obvious of these is a loss of trust in public institutions. Factors such as the willingness of Western governments to allow widespread impoverishment, the weakening of labour organisations, and the failure to provide adequate healthcare and other necessities, feed into powerful movements seeking to undercut the mainstream political system.
“So too we see ideas from the intellectual fringe informing these increasingly powerful political movements. Some of these movements use social Darwinist ideas to claim, for instance, that public welfare is undercut by immigration. In Europe, the normalisation of nationalist groups such as the one supporting Éric Zemmour’s bid for the French presidency, or Viktor Orbán’s Fidesz Party in Hungary, is threatening established political norms.
“In the United Kingdom, some advocates of Brexit have translated traditional English exceptionalism into a form of hypernationalism in terms that, like those of the former US president Donald Trump’s supporters, echo social Darwinist doctrines. The prevalence of belief in lies, such as the lie that Trump won the 2020 election, is evocative of the universe of false assumptions that spread in Germany during Hitler’s rise to power.
“To combat the fissures that election lies, immigration fantasies or antivaccination movements represent, Western governments should recognise that the prevalence of fringe thinking is a sign that they are failing.
“The path to restoring faith – which could lead through the sort of disruption that has preserved societies in the past – will offer real help to those who have been left behind. The underlying principle of liberal democracy is the contract between government and the governed. Government has a responsibility to reign in corporate power [and fringe groups] that undermine public welfare and spread falsehood, just as it has a responsibility to ensure that people have access to the goods and services they need. This will require practices very different from ‘politics as normal.’ It is a critical lesson from history that, when normality fails, change will come. The signs are that we’re in a time that is ripe for disruption…” (AEON).
From A history of disruption, from fringe ideas to social change | Aeon Essays
David Potter is Francis W Kelsey Collegiate Professor of Greek and Roman History and Arthur F Thurnau Professor at the University of Michigan. His books include Constantine the Emperor (2013), Theodora: Actress, Empress, Saint (2016), The Origin of Empire: Rome from the Republic to Hadrian (2019), and Disruption: Why Things Change (2021).