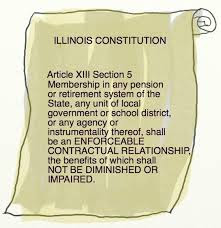 “Through its recent decisions, the Illinois Supreme Court delivered a clear message that pension reform efforts seeking to unilaterally reduce benefits simply cannot be squared with the Illinois Constitution's pension clause. That outcome was hardly surprising given the plain language, drafting history, and prior court decisions interpreting the pension clause.

“Now that the Illinois Supreme Court has clearly reaffirmed that welching is simply not an option the General Assembly may pursue, the question becomes what can legislators do?

“As [Eric Madiar] recently wrote in the Chicago-Kent College of Law Bulletin, the court's recent decisions reveal that adherence to usual contract principles — offer, consideration, and acceptance — provides a legal avenue for structuring pension reform legislation that can achieve meaningful savings and square with the pension clause.

“In particular, the proposal offered by Senate President John J. Cullerton provides one such viable approach consistent with those principles despite recent criticism. Another perhaps more collaborative approach is engaging public sector labor unions and forging an agreement that reduces the pension benefits of current union employees through the collective bargaining process.

“While some stakeholders portray amending the pension clause to permit unilateral benefits cuts or authorizing Illinois municipalities to file for federal bankruptcy to discharge their pension obligations as viable options, the Article shows that is simply not the case. Indeed, even if the clause were amended — a big if — a court would most likely find that the amendment violates the U.S. Constitution's contracts [Article 1] or takings clause [5th Amendment].

“Moreover, the General Assembly simply lacks the legal power to enact the valid state law necessary under federal law to authorize its municipalities to file for bankruptcy. As the Illinois Supreme Court recently explained, there is ‘no possible basis for interpreting the pension clause to mean its protections can be overridden if the General Assembly deems it appropriate.’

“Accordingly, the clause withdraws from the legislature, as a matter of state law, the legal power to pass any statute authorizing municipal bankruptcy as a means to unilaterally discharge public pension obligations.

“In the end, while contract principles and other permissible options can help mitigate the burden of State and municipal pension obligations, the state must still restructure its revenue system so it can meet, not simply defer its fiscal obligations.

“As Paul Simon observed in 1971, ‘We mortgage the future not only when we create bonded indebtedness; we also mortgage the future when we don't pay into the pension systems as we should.’ Revising our State's revenue system, of course, will require political courage and entail tax increases. Welching on public pensions, however, is still not an option for Illinois.”

— Eric Madiar is an attorney and government relations consultant based in Springfield, who previously served as chief legal counsel to Senate President John J. Cullerton from 2009-2014. To read his recent article in the Chicago Daily Law pension article, click here.

This article, "Eric Madiar: State's pension obligations must be met," is from The State Journal-Register.