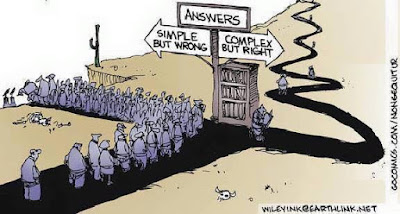 Watching the Republican Convention this week, I believe the above cartoon summarizes the thought processes of the delegates. 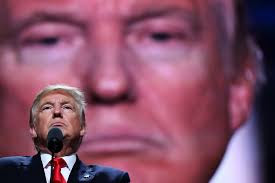 “It was a speech [written by Stephen Miller and] perfectly suited to the nominee [who is narcissistic and incoherent]. It was a speech utterly unconnected to anything we have ever heard from any previous nominee. It was, then, exactly what we should have expected from this most unexpected of candidates: [more fear mongering, impossibilities, and platitudes].

“Most American presidential nominees—indeed, most convention speakers—pay homage to out-sized figures of the nation's past, even some from the other side of the spectrum. House Speaker Paul Ryan, as did countless others in Cleveland, paid homage to Ronald Reagan. Vice Presidential nominee Mike Pence told the assembled Republicans that ‘the heroes of my youth were President John F. Kennedy and the Reverend Dr. Martin Luther King Jr.’ Ronald Reagan himself, back in 1980, quoted Franklin D. Roosevelt. In past conventions, the Founding Fathers were invoked, or inspirational party leaders of the past, or some link to the heritage of party or country.

“And Donald Trump? In his speech, there was no thread of any kind linking him to past American greats [because Trump does not read historical books. He only reads fictional accounts about himself. There was] no sense that he [was] following any tradition. Indeed, in one of the best-received lines of the speech, he told us, of our ‘rigged’ system: ‘I alone can fix it.’ Fix it with his own party’s leadership in Congress, or with an aroused populace? No. ‘I alone can fix it,’ [he said with his Napoleonic sense of self-importance]!

“In so many other ways, Trump presented himself as a man alone, imbued with the power to do what no other person or institution can do. Consider how he described his visits to ‘the laid-off factory workers, and the communities crushed by our horrible and unfair trade deals. These are the forgotten men and women of our country. People who work hard but no longer have a voice.’

“‘I am your voice,’ [he said, the voice of the G.O.P.'s Moneyed Class]. In his speech, Trump defined himself as a bedrock figure in American culture: the figure who faces danger alone, who follows his own code of conduct.

“In this declaration—repeated at the end of the speech—Trump defined himself as a bedrock figure in American culture: the figure who faces danger alone, who follows his own code of conduct. He is Gary Cooper, standing alone against the Miller Gang in Hadleyville. To be more precise, and more contemporary, he is the man who uses his great wealth to protect the powerless from evil: He’s Bruce Wayne as Batman, Tony Stark as Ironman [but he's really a combination of Henry the Eighth, Mussolini, and Madonna].

“In this persona, there is no room for a note of good humor or the kind of self-deprecation we've seen in other nominees [there is only room for authoritarianism and bigotry]. Mike Pence noted, in introducing himself to the crowd, that Trump ‘is a man known for having a large personality, a colorful style, and lots of charisma. I think he was just looking for some balance on the ticket…’ [a balance that now joins together a Donald Sterling type of character with Fred Phelps].

“Nor is there any room for a cautionary note about the limits of presidential power. John Kennedy’s 1961 inaugural address, for instance, ends by saying of his: ‘all this will not be finished in the 100 days. Nor will it be finished in the first 1000 days, nor in the life of this Administration.’

“What does Trump say? ‘…The crime and violence that today afflicts our nation will soon come to an end… On the economy, I will outline reforms to add millions of new jobs and trillions in new wealth that can be used to rebuild America… On January 21st of 2017, the day after I take the oath of office, Americans will finally wake up in a country where the laws of the United States are enforced… I am going to bring our jobs back to Ohio… and to America – and I am not going to let companies move to other countries, firing their employees along the way, without consequences.’ [These are just a few of his delusions of grandeur and his hypocrisy].

“It is impossible to imagine anyone else giving an acceptance speech so disconnected from anything in the American political tradition. In this speech, we have finally seen the answer to the perplexing question of just what political philosophy Donald Trump embraces. It is Caesarism: belief in a leader of great strength who, by force of personality, imposes order on a land plagued by danger.

“If you want to know why Trump laid such emphasis on ‘law and order’—using Richard Nixon’s 1968 rhetoric in a country where violent crime is at a 40-year low—it is because nations fall under the sway of a Caesar only when they are engulfed by fear. And the subtext of this [dystopian] acceptance speech was: be afraid; be very afraid.

“It is impossible to imagine anyone else giving an acceptance speech so disconnected from anything in the American political tradition. Whether voters see that departure as a cause for celebration or worry may help decide what happens in November.”