This Presidential Election Is “Consequential” 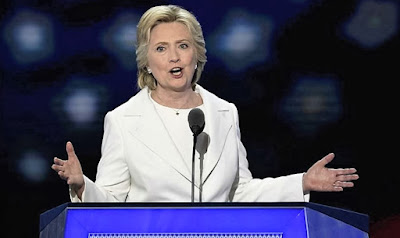 From the Editorial Board at the Houston Chronicle:

“On Nov. 8, 2016, the American people will decide between two presidential contenders who represent the starkest political choice in living memory. They will choose between one candidate with vast experience and a lifelong dedication to public service and another totally lacking in qualifications to be president. They will decide whether they prefer someone deeply familiar with the issues that are important to this nation or a person whose paper-thin, bumper-sticker proposals would be dangerous to the nation and the world if somehow they were enacted.

“The Chronicle editorial page does not typically endorse early in an election cycle; we prefer waiting for the campaign to play out and for issues to emerge and be addressed. We make an exception in the 2016 presidential race, because the choice between Hillary Clinton and Donald Trump is not merely political. It is something much more basic than party preference…

“Any one of Trump's less-than-sterling qualities - his erratic temperament, his dodgy business practices, his racism, his Putin-like strongman inclinations and faux-populist demagoguery, his contempt for the rule of law, his ignorance - is enough to be disqualifying. His convention-speech comment, ‘I alone can fix it,’ should make every American shudder. He is, we believe, a danger to the Republic.

“It's telling that so many Republicans have distanced themselves from their party's nominee. That sizeable list includes a number of prominent Texans, Bush family members foremost among them, as well as Sen. Cruz and House Speaker Joe Straus. These stalwart Republicans are concerned not only about the future of their party (and, with the exception of the two Bush presidents, their own political careers), but, more important, they're concerned about the future of this nation.

“It would not be surprising to discover that these experienced politicians and public servants share the existential concern that first lady Michelle Obama raised in her powerful speech on behalf of Clinton at the party convention in Philadelphia: ‘Because when you have the nuclear codes at your fingertips and the military at your command, you can't make snap decisions. You can't have a thin skin or a tendency to lash out. You need to be steady and measured and well-informed.’

“Americans know Hillary Clinton… Whether voters like her personally is almost irrelevant at this ‘moment of reckoning,’ to use Clinton's words… On the issues, there's no comparison in terms of thoughtfulness, thoroughness and practicality.

“Acknowledging the influence of erstwhile competitor Bernie Sanders, for example, she will focus as president on repairing an economy that has left many working people behind and struggling. She will address income inequality and wage stagnation and will work to create jobs. She'll work with Congress to end tax loopholes, noting as she did on CBS's ‘Sixty Minutes’ last weekend that an executive shouldn't be paying the same tax rate as his secretary. She also will push for equal pay for women, increasing the minimum wage and expanding tax credits for poorer families.

“Rejecting the ridiculous border-wall notion her opponent famously touts, she'll push for comprehensive immigration reform, building on a sensible plan that passed the U.S. Senate three years ago, only to be held hostage by a rump group of tea-party opponents in the House. She has said she intends within the first 100 days of her administration to introduce a path for the undocumented among us to earn citizenship.

“Health care has been a decades-long issue for Clinton, at least since her days as the first lady of her adopted state of Arkansas. As first lady in the White House a few years later, her failed health initiative led to the creation of CHIP, the immensely successful children's health insurance program. She will work to improve the Affordable Care Act, not abolish it.

“On energy…, she acknowledges the seriousness of climate change, the most ‘consequential, urgent, sweeping’ problem the world faces. She has said she wants the United States to be the ‘clean energy superpower of the 21st century.’ She also acknowledges that clean-energy reforms will result in economic casualties, among them the coal industry. She has proposed a $30 billion plan to revitalize communities where coal production is in decline and, as Bill Clinton mentioned in his convention speech last week, she intends to dispatch him to West Virginia to help struggling families and communities build a viable economic future.

“Hillary Clinton has said she sees natural gas as a bridge fuel and foresees a new economy built on rapidly increasing shares of renewable energy. She has a record of supporting fracking, and she supports the Paris agreement on climate change.

“On trade…, although she now says she opposes the Trans-Pacific Partnership…, we're confident she will be adept at negotiating deals that would grow wages and jobs and that would protect American workers. Despite his vaunted deal-making claims, her opponent, we suspect, would be lost at sea trying to meet the nation's trade goals.

“On foreign affairs, the former secretary of state is knowledgeable, dependable and trusted worldwide, unlike her blusterous opponent whose outrageous remarks last week about Russia were merely the most recent bizarre outburst to unsettle our allies… Clinton supports NATO, unlike Trump who, in the words of columnist Timothy Egan, ‘now stands ready to repudiate nearly 70 years of security for our European allies under an 'America First' banner.’

“We could go on with issues, including her plans for sensible gun safety and for combatting terrorism - her policy positions are laid out in detail on her campaign web site - but issues in this election are almost secondary to questions of character and trustworthiness. We reject the ‘cartoon version’ of Hillary Clinton (again to borrow her husband's phrase) in favor of a presidential candidate who has the temperament, the ability and the experience to lead this nation.

“These are unsettling times, even if they're not the dark, dystopian end times that Trump lays out. They require a steady hand. That's not Donald Trump. The times also require a person who envisions a hopeful future for this nation, a person who has faith in the strong, prosperous and confident America we hope to bequeath our children and grandchildren, as first lady Michelle Obama so eloquently envisioned in Philadelphia. That's not Donald Trump's America…”

from These are unsettling times that require a steady hand: That's not Donald Trump, Houston Chronicle Editorial Board endorses Hillary Clinton