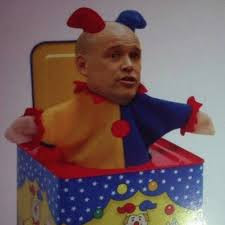 (Image is from CapitolFax.com)


“…The abrupt resignation of state Rep. Ron Sandack -- an outspoken member of the legislature who was Gov. Bruce Rauner’s reliable attack dog on the House floor -- was stirring all kinds of talk late Sunday. As Republican floor leader, Sandack was the governor’s point person in the House, arguing strenuously for the governor’s office (and generally against Democratic Speaker Mike Madigan) on individual bills.

“Sandack resigned on Sunday following what he described as a series of cyberattacks on his Twitter and Facebook accounts, which involved the creation of new accounts under the guise of his own persona.

“‘I have always recognized there is no greater privilege than being a father and husband. My duties in Springfield [have] meant missing a lot of events in the lives of my children. I am no longer willing to miss important family events.’ Story and Sandack’s full statement here: http://politi.co/2a6DXRn
“In a text to Politico Illinois last night, Sandack said his resignation was effective Monday and that the cybersecurity issues gave him pause over his legislative life: ‘my family welfare is paramount.’ He did not respond when asked whether that meant he feared for his family’s safety. Sandack would not talk by phone.

“SO … why are so many people having trouble believing him? Here’s a few reasons we want to hear more (anything?) from Republican leaders today: 1. Something seems off with the equation. (High-profile statehouse Republican) + (close to most powerful Republicans in state) + (social media accounts hacked into) = immediately resigns?

“2. Crickets. The governor, Illinois House Republicans, others in leadership, said a big nada on Sunday at the news of the loss of a top lieutenant. No statements released by leaders. No response from a governor’s spokeswoman when asked for reaction late Sunday. No answer from several Republican party and legislative leaders (with the exception of House Republican forwarding a copy of Sandack’s statement.) That won’t hold today though.

“3. Timing. Sandack took down his own social media accounts last week, which prompted all kinds of speculation. He said on Sunday the cyber hacking/harassment started around July 4. He resigned days after taking down his accounts. Days earlier, the Illinois House Victory Fund had spent $10,300 in printing costs for his campaign. http://bit.ly/2aEYZIF
“4. Sandack has long been an outspoken, incredibly accessible guy -- except on the day he resigned. Instead, his announcement was carefully crafted. It was first made available in a relatively safe venue -- the Capitol Fax newsletter. The writeup (which is password protected or we’d include a link) describes Sandack working to take down two fake accounts on Twitter and 10 on Facebook, which purported to behave as Sandack accounts. In the midst of this, Sandack says he experiences a moment of clarity, realizing he doesn’t want to miss any more of his kids’ events.

“What was missing from the CapFax piece was any description as to what actually happened on these fake accounts. Had they actually posted content pretending to be Sandack? Were they threatening? Embarrassing? The piece said Sandack filed a police report.

“Beside Sandack, the other person quoted in the CapFax writeup was a recent Rauner appointee, John Bambenek, who talked about how unusual and dangerous it was to have such an open attack against a public official. He also talked about the difficulty of prosecuting computer crimes. (Incidentally, on Sunday, Bambanek on Twitter said this about a higher-profile cyber incident: http://bit.ly/29YXwMn)...

“Sandack leaves with nearly $130,000 in his campaign account, according to the most recent election filing. He was up for reelection in November… Gov. Rauner is in Chicago today, and will no doubt be asked to weigh in on this one.”