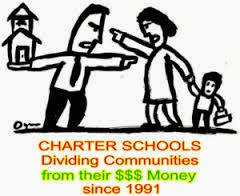 What interest do the real estate industry and Wall Street have in promoting the expansion of charter schools?

According to Alan Singer, educator and blogger, “The real estate industry, which already receives huge tax breaks as it gentrifies communities, also stands to benefit by promoting charter schools and helping them buy up property, or rent, in inner city communities. One real estate company, Eminent Properties Trust, boasts on its website ‘Our investment portfolio of nearly $3 billion includes megaplex movie theatres and adjacent retail, public charter schools, and other destination recreational and specialty investments. This portfolio includes over 160 locations spread across 34 states with over 200 tenants.’

“The Charter management group Charter Schools USA recommends that rental costs should not exceed 20 percent of a school's budget. However the Miami Herald reported that in 2011 nineteen charter schools in Miami-Dade and Broward exceeded this figure and one in Miami Gardens paid forty-three percent. The Herald called south Florida charter schools a ‘$400-million-a-year powerhouse backed by real-estate developers and promoted by politicians, but with little oversight.’ Its report found charters paying exorbitant fees to management companies and that many of the highest rents were paid to landlords with ties to the management companies running the schools.

Could the billionaire charter school craze, in part, have something to do with the New Markets Tax Credit (NMTC)?

Juan Gonzalez, investigative reporter for the New York Daily News, says, “It turns out that at the tail end of the Clinton administration in 2000, Congress passed a new kind of tax credit called a New Markets Tax Credit. And what this allows is it gives an enormous federal tax credit to banks and equity funds that invest in community projects in underserved communities, and it’s been used heavily now for the last several years for charter schools.

“…And what happens is, the investors who put up the money to build the charter schools get to basically virtually double their money in seven years through a 39 percent tax credit from the federal government. In addition, this is a tax credit on money that they’re lending, so they’re collecting interest on the loans, as well as getting the 39 percent tax credit. They piggyback the tax credit on other kinds of federal tax credits, like historic preservation or job creation or Brownfields credits. The result is, you can put in $10 million and in seven years double your money.

“And the problem is that the charter schools end up paying in rents the debt service on these loans. And so, now a lot of the charter schools in Albany (New York) are straining paying their debt — their rent has gone up from $170,000 to $500,000 in a year, or huge increases in their rents, as they strain to pay off these loans, these construction loans. And the rents are eating up huge portions of their total cost. And, of course, the money is coming from the state.

“So, one of the big issues is that so many of these charter schools are not being audited. No one knows who the people are making these huge windfall profits as the investors. And often there are interlocking relationships between the charter school boards and the nonprofit groups that organize and syndicate the loans. And so, there needs to be sunlight on this whole issue. And the state legislature right now is considering expanding charter school caps, but one of the things I press for in my column, there has to be the power of the government to independently audit all of these charter schools, or we’re not going to know how public dollars are ending up in the coffers of Wall Street investors” (Democracy Now! Big Banks Screw Tax Payers on School Construction).

It appears the NMTC is going to be extended.  In its proposed budget for fiscal year 2016, the Obama administration proposes to permanently reauthorize the New Markets Tax Credit (NMTC) program and requests $5 billion of allocation authority per year (New Markets Tax Credit Resource Center).