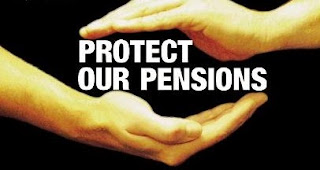 To possess a right to a promised deferred compensation, such as a pension, is to assert a legitimate claim with all Illinois legislators to protect that right. There are no rights without obligations. They are mutually dependent. Fulfilling a contract is a legal and moral obligation justified by trust among elected officials and their constituents.

All citizens have rights that must be protected. When legislators swear an oath to uphold the state and federal constitutions (Article XIII, Section 3 of the Constitution of the State of Illinois), then citizens of Illinois and the United States have also acquired the right to expect that they will uphold that pledge. This is also a matter of important moral concern for all citizens of a state, for all legal claims will be validated by a moral framework since the concept of justice is grounded in ethics. If citizens’ legal rights are abused, then their dignity and humanity will also be violated. According to Alicia H. Munnell, Director of the Center for Retirement Research at Boston College, Illinois is one of seven states where accruals are protected, and the legal basis for protection of public pension rights is under state law (State and Local Pensions).

Like all other citizens, public employees’ legal rights are derived from past political constitutions, legislative enactments, and case law. All citizens of Illinois have a fundamental right to oppose a General Assembly that imposes a violation of their constitutional rights and benefits… “Any statute which [is] imposed upon [public employees]… in order to redistribute resources and thus benefit some persons at the expense of others [extends] beyond the implicit boundaries of legislative authority. Such laws…violate natural rights of property and contract, rights lying at the very core of the private domain” (Laurence H. Tribe, American Constitutional Law). Current pension reform is without legal and moral justification; furthermore, to call it "pension reform" when it is "breaking a contract" is a fabrication.

“Wherever there is a right, the case is one of justice and not of the virtue of beneficence… When we call anything a person’s right, we mean that he [or she] has a valid claim on society to protect him [or her] in the possession of it, either by the force of law or by that of education and opinion” (John Stuart Mill, Utilitarianism).

The significant issue of pension reform is its attack on public employees’ rights to constitutionally-guaranteed, earned compensation and the legislators’ obligation to safeguard those promises. An unconscionable constitutional challenge of those rights and earned benefits generates a serious threat to their secure sense of worth as citizens and creates the unfair possibility for an economic disadvantage for a particular group of people and their families. This can never be legally or morally justified.

Public employees are promised certain retirement compensation. It is earned; it is not a gratuity. They expect and plan their lives based upon these promises. “The very idea that [the state can] hold [public employees’ lives], or the means of [their] living, or any material right essential to the enjoyment of life, at the mere will of another ‘has been thought’ intolerable in any country where freedom prevails” (John Locke, Two Treatises of Government).

State “governments must respect ‘vested rights’ in property and contract…” (Tribe). We should be able to assume most legislators in Illinois understand this concept of justice and that lawfulness demands that people keep their "covenants" with one another. Regarding current pension reform, no justice is accomplished when subordinating or diminishing public employees’ rights and earned benefits because of past legislators’ negligence, irresponsibility, and corruption.

All citizens of the State of Illinois have legal justification for their rights. As stated, the foundation of their rights is the State and U.S. Constitutions that directly support any claims against them. State contracts are protected by the federal government. Understandably, the 5th and 14th amendments of the United States Constitution protect due process of law. The legal bases for protection of past-and-future public pension rights are established in both constitutions.

“Each person possesses an inviolability founded on justice that even the welfare of society as a whole cannot override… It does not allow that the sacrifices imposed on a few are outweighed by the larger sum of advantages enjoyed by the many. Therefore, in a just society the liberties of equal citizenship are taken as settled; the rights secured by justice are not subject to political bargaining or to the calculus of social interests” (John Rawls, A Theory of Justice).

"The notion that, whenever a privilege or benefit might be withheld altogether, it may be withheld on whatever conditions government chooses to impose, has been repeatedly repudiated since the mid-20th century... Unconstitutional conditions – those that make enjoyment of a benefit contingent on sacrifice of an independent constitutional right – are invalid..." (Tribe).

Breaking a contract threatens the integrity of all laws that govern and protect the citizenry, for the values of the United States Constitution (Article I, Section 10) and the Illinois State Constitution (Article I, Section 16 and Article XIII, Section 5) are dependent upon the understanding and integration of all of the articles and amendments in totality; “the strength of the constitution[s] would not be proven by considering each article or amendment in isolation from the others” (Tom Beauchamp, Philosophical Ethics).

As citizens, we are advocates of a unification of the Bill of Rights in the United States Constitution, which protects all of us from any violations of human rights and contracts, as much as we would wish others to be motivated by a way of life that is also governed by a complete moral system of thinking. There are no good reasons for legislators’ attack on public employees’ rights and benefits and their attempt to equate public employees' lives to an exchange rate in dollar amounts. The General Assembly cannot justify pension reform in accordance with fundamental, constitutional principles of reason and morality.

What we call rights of individuals is bound up with the theory and precepts of social and political justice we adopt (John Stuart Mill, On Liberty). All citizens of the State of Illinois have legal justification for their rights and for compensation they have earned, for rights and obligations are logically correlative, and a citizen’s rights imply or complement the legislators’ obligation to guarantee them.

The keeping of promises is the General Assembly’s legal duty. It is something the United States Constitution requires them to do whether they want to or not. Unfortunately, we see that in Illinois many legislators are willing to act without moral or ethical principles, even though “claims of rights [are] prima facie or presumptively valid-standing claims” (Beauchamp).

What is at stake right now is an adjudication of claims that public employees have against policymakers who have coerced changes to public employees’ benefits and rights and who are breaking public employees’ contractual and constitutional promises. These are legitimate rights and moral concerns not only for public employees, but for every citizen in Illinois: for any unwarranted act of stealing a person’s guaranteed rights and compensation will violate interests in morality and ethics and the basic principles of both the State and United States Constitutions that protect every one of us.

It is a moral concern and legal duty to reform the state's sources of revenue and to address the incurred pension debt through restructuring so the state can provide services for its citizens and fund the public pension systems instead of incriminating public employees, and thereby forcing them to defend the State and United States Constitutions.


There is no justice in granting financial benefits for the wealthy among us and attempting to place the burden of financing public pensions upon schools and taxpayers by Illinois policymakers; there is no justice in granting tax breaks for wealthy corporations and, at the same time, legislating cuts to public employees’ constitutionally-promised compensation. It is ethically wrong to perpetuate unfair distributions of debts in Illinois, especially when Illinois legislators give “undeserved weight to highly-organized wealthy interest groups, [those groups] tending to ‘drain politics of its moral and intellectual content’” (Tribe).

“The Pension Clause [Article XIII, Section 5 of the Illinois Constitution] not only makes a public employee’s participation in a pension system an enforceable contractual relationship, but also constitutionally protects the pension benefit rights contained in the Illinois Pension Code when an employee joins a pension system, including employee contribution rates. The Clause also safeguards pension benefit enhancements that are later added during employment. Further, the Clause ensures that pensions will be paid even if a pension system defaults or is on the verge of default. Finally, while the Clause bars the General Assembly from adversely changing the benefit rights of current employees via unilateral action, these rights are 'contractual' in nature and may be modified through contractual principles. In sum, while welching on public pension promises is not an option for Illinois as some legal and civic commentators have suggested, legitimate contract principles provide a solution to mitigate this crisis” (Eric M. Madiar, Chief Legal Counsel to Illinois Senate President John J. Cullerton and Parliamentarian of the Illinois Senate, Abstract for Is Welching on Public Pension Promises an Option for Illinois? An Analysis of Article XIII, Section 5 of the Illinois Constitution)…

Excerpted from Illinois Pension Reform Is Without Legal and Moral Justification (originally posted on May 29, 2012).