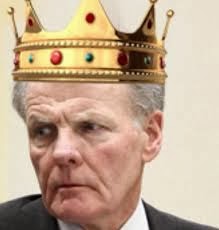 from Michael Madigan Is the King of Illinois by James Ylisela Jr.

“…As politically invincible as he is, Madigan still stoops to running against fake opponents whose names his workers place on the ballot to give the appearance of a competitive contest without actual competition. So even as he coasts to easy reelection every time—he typically wins more than 75 percent of the vote—he still acts like a paranoid dictator brooding over the next coup. At every reapportionment, he rigs the legislative districts politically to fatten his majority—democracy be damned…

“Madigan’s dominance over the legislative process means that lawmakers, lobbyists, and other supplicants must pay obeisance through favors, patronage, or political contributions. ‘We’re expected to follow along like lemmings and take a loyalty test over and over,’ griped Julie Hamos, a former Democratic state representative from Evanston, after Madigan and his lieutenants blocked a 2009 ethics plan that she supported from coming out of his Rules Committee.

“Madigan’s detractors point out that his endless power grabs rarely seem to serve a public policy agenda. Just look at the current Metra scandal. That little imbroglio will now cost taxpayers more than $700,000.

“Or, how about this one? For five years, from 2005 to 2010, Madigan blocked the bills needed to refinance the bond debt for McCormick Place—because, critics say, the agency’s CEO had fired one of his political allies and nixed a proposed hotel deal with a prominent developer who had once been represented by the speaker’s law firm. The punitive delay cost taxpayers around a half-billion dollars in higher interest payments. (Madigan’s camp said the speaker held up the refinancing to prevent Rod Blagojevich’s cronies from receiving lucrative contracts).

“Speaking of Madigan’s law practice: A recent Sun-Times article reported that Madigan & Getzendanner has won nearly $44 million in property tax refunds for Chicago property holders and almost $14 million for suburban Cook County landowners over the past 10 years. When a downtown building gets its tax bill dropped, it not only shifts the tax burden to other property owners, who must make up the lost money, but it also siphons much-needed tax dollars from public schools, among other things…

“Madigan controls far more than just half of one of the three branches of Illinois government, of course. He holds a second job as the chairman of the Democratic Party of Illinois, a third as the boss of Chicago’s 13th Ward, and a fourth as a name partner and the chief rainmaker of Madigan & Getzendanner. Together, they make up what one former Cook County elected official calls ‘the Madigan Political Industrial Complex.’

“Take the state Democratic Party. Madigan uses his own war chest and the party campaign account to maintain his House majority, steering donations from corporate and special interests to favored candidates. Records show that Madigan has raised more than $35 million since 1994. He uses a third fund, Democratic Majority, to pay for polls, election materials, and campaign staff. That fund paid out almost $1 million in the final quarter of 2012, just before and after the November elections. Implicit in this arrangement is that his candidates, once they win, are beholden to him…

“Madigan also isn’t above the patronage politics of old. A recent Sun-Times investigation found that of the 30 campaign workers who circulated nominating petitions to get Madigan on the 2012 ballot, 29 work or have worked in government. Collectively, they were paid about $2 million a year in their government jobs—and contributed more than $200,000 to Madigan’s political funds or to Lisa Madigan’s campaign.

“As a party committeeman, Madigan is also one of the main political masters who, cloistered in some backroom, picks which lawyers are slated for judgeships on the Circuit Court of Cook County. ‘That’s a big deal,’ says a Chicago political insider. ‘You got somebody by the balls when you make him or a family member a judge.’

“…Given that nothing happens in Illinois government without Madigan’s blessing, many critics lay the blame for the state’s massive problems directly at his door. Illinois is broke, with pension debt approaching $100 billion and growing by $17 million a day. It has consistently failed to pass pension reform—or to reform much of anything else. Springfield has become a morass of inaction and ineptitude that has made the state a national laughingstock.

“For crying out loud, our top legislative leaders just took our governor to court . . . over their salaries. ‘No one person is solely responsible for Illinois’s troubles, not even Mike Madigan,’ says Douglas Whitley, the president and CEO of the Illinois Chamber of Commerce. ‘But his role and longevity suggest that he above all others can be held accountable and responsible for what has gone on and what may happen in the future.’

“In short, you’d think that being speaker of the Illinois House wouldn’t be a helluva lot of fun anymore, Democratic supermajority (currently 71 of 118 seats) notwithstanding. Madigan is well past retirement age. He could step down tomorrow and collect an annual pension of about $132,000. The longer he stays, the greater the risk of lasting damage to his already complicated legacy. And the greater the risk of poking and prodding into his secretive political and business dealings…

“Why is he holding on to the job with an iron grip? He’s certainly not a policy visionary with a bold civic agenda he’s aching to complete. He’s not a do-gooder with a deep-seated need to help others. He’s not a passionate ideologue who won’t rest until, say, same-sex marriage or immigration reform becomes law.

“Perhaps, some politicos around town speculate, Madigan didn’t step down when Lisa wanted to run for governor because he didn’t want his daughter to get thrown into the middle of the state’s horrific financial problems before he could deal with them. (At 47, she can wait four, maybe more, years.) Maybe he wants a new Republican governor to share the political burdens that his Democratic caucus largely carries.

“Or maybe, having outlasted eight governors and eight Chicago mayors, he simply can’t tolerate feeling as if he’s being shoved out—even by his daughter. You don’t have to be Freud to see that Madigan has a profound need for power, order, and control. Angelo ‘Skip’ Saviano, a former Republican legislator from Elmwood Park, notes that the 1994 Republican revolution that swept Madigan out of power in Springfield ‘drove him absolutely wacko.’

“Most everyone who knows him agrees that Madigan is obsessed with winning. To him, bills are primarily cost-benefit analyses (‘Will this help or harm my majority?’). Not only does he crave power; he’s become captive to it. ‘His job is his life, and his life is his job,’ says James McPike, a legislator-turned-lobbyist who served 12 years as Madigan’s majority leader from 1983 to 1995 and remains one of the speaker’s closest friends. Adds a current Republican legislator: ‘This is his oxygen. He can’t give it up.’ And that, says Sacia, is Madigan’s ‘Achilles’ heel.’”

From Michael Madigan Is the King of Illinois by James Ylisela Jr.