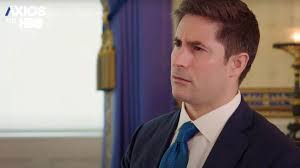 Jonathan Swan started the interview by questioning whether Trump’s positive attitude regarding the coronavirus – in other words, his repeated insistence over a period of months that it was under control and would disappear – was suited to dealing seriously with the pandemic.

Trump: “Look, look, nobody knew what this thing was all about. This has never happened before. 1917, but it was totally different, it was a flu in that case. But 1917 – there’s never been anything like this. And by the way, if you watch the fake news on television, they don’t even talk about it, but there are 188 other countries right now that are suffering. Some, proportionately, far greater than we are.”

Trump: “Some, proportionately, greater than we are. Right now, right now, Spain is having a big spike. And there are tremendous problems in the world. You look at Moscow, look at what’s going on with Moscow. Look at Brazil. Look at these countries, what’s going on. This was sent to us by China, one way or the other, and we’re never going to forget it. Believe me, we’re never going to forget it. And we were beating China at every single point. We were beating them on trade. We were making progress like nobody’s ever made progress. They had, before the pandemic, they had the worst year, Jonathan, that they’d had in 67 years. You know that. With the tariffs and everything else I did… Then all of a sudden, the game changed. And I had to close it down. I closed down the greatest economy ever in history. And then, I closed it down. And now we’re opening it. And we saved, by the way, by closing it, we saved millions of lives. If we would have gone to herd (immunity), and we knew very little about the disease, if we would have gone herd, we would have lost millions of people. Millions of people. One person’s too much. We’re at 140,000 people. One person is too much. We’re at 140,000. We would have lost millions of people. And those people that really understand it, really understand it, they said it’s incredible, the job that we’ve done.”

Trump: “Again, the ban, banning China from coming in-”

Swan: “But it was already in here. It was already here. By the time you banned China, it came through Europe.”

Swan: “But the question is, Mr. President, by June we knew. Things were bad. And you know, the last time I was with you was the day before your Tulsa rally. And you were saying, big huge crowd, it was indoors. These people, they listen to you.”

Swan: “Why would you have wanted that?”

Trump: “You had 120 Black Lives Matter people there.”

Swan: “I understand, but why would you have wanted a huge crowd?”

Trump: “Excuse me, wait. And Tulsa – well, because that area was a very good area at the time…”

Swan: “I think you misunderstand me. I’m not criticizing your ability to draw a crowd. Are you kidding me? I’ve covered you for five years, you draw massive crowds, you get huge ratings. I’m asking about the public health.”

Trump: “I cancelled another one. We were going to have a great crowd in New Hampshire, and I cancelled it for the same reason.”

Swan: “I’ve covered you for a long time. I’ve gone to your rallies; I’ve talked to your people. They love you; they listen to you; they listen to every word you say. They hang on to your every word. They don’t listen to me, or the media, or Fauci, they think we’re fake news. They want to get their advice from you. And so, when they hear you say, ‘Everything’s under control, don’t worry about wearing masks,’ these are people – many of them are older people, Mr. President. It’s giving them a false sense of security.”

Trump: “Well what’s your definition of control? Under the circumstances, right now, I think it’s under control.”

Swan: “How? A thousand Americans are dying a day.”

Trump: “They are dying, that’s true. And it is what it is. But that doesn’t mean we aren’t doing everything we can. It’s under control as much as you can control it. This is a horrible plague that beset us.”

Swan: “You really think this is as much as we can control it? A thousand deaths a day?”

Trump: "They are dying. That's true. And you -- It is what it is! But that doesn't mean we aren't doing everything we can. It's under control as much as you can control it… I’d like to know if somebody – first of all, we have done a great job. We’ve got the governors everything they needed. They didn’t do their job – many of them didn’t, some of them did. We had good and bad and we had a lot in the middle. But we had some incredible governors – I could tell you, right now, who the great ones are and who the not-so-great ones are. But the governors do it.”

Trump: “You know, there are those that say you can test too much. You do know that.”

Trump: “What testing does-”

Trump: “Let me explain. What testing does, it shows cases. It shows where they may be cases. Other countries test – you know when they test? They test when somebody’s sick. That’s when they test. And I’m not saying they’re right or wrong. Nobody’s done it like we’ve done it. We’ve got absolutely no credit for it. But we’ve come up with so many tests. The only thing we have now is, some people have to wait longer than we’d like them to.”

Trump: “Excuse me, one thing I would say about testing. Because we test so much, we show cases. So, we show many, many cases. We should tremendous numbers of cases. I know you’re smiling when I say that, but-”

Trump: “Other countries don’t test like we do, so they don’t show cases.”

Swan: “Just a couple of points on that. I wasn’t going to continue on the testing, but you said it. So, we’re testing so much because it’s spread so far in America, and-”

Trump: “And in very short order, we got one test, we got another test.”

Swan: “It was broken, the first one.”

Trump: “Many of those tests are now obsolete, because you know, it’s called science, and all of a sudden something’s better. But because we tested so many people, 55-60 million people, very soon, we get cases. You test, some kid has even just a little runny nose, it’s a case. And then you report many cases. So, we look like we have more cases than massive countries, like China – which by the way, doesn’t report, as you know.”

Swan: “I don’t put any stock in China’s figures.”

Trump: “The point is, because we are so much better at testing than any other country in the world, we show more cases.”

Swan: “The figure I look at is death. And death is going up now. It’s a thousand a day.”

Trump: “If you look at death – take a look at some of these charts.”

Swan: “Lower than the world?”

Swan: “Why not as a proportion of population?”

Trump: “What it says is when you have somebody, where there’s a case, the people that live from those cases.”

Swan: “Sure. It’s surely a relevant statistic to say if the US has X population and X percentage of death of that population, opposed to some-”

Trump: “No, because you have to go by the cases.”

Swan: “I do. You think they’re faking their statistics? South Korea?”

Trump: “Ah, I won’t get into that, because I have a very good relationship with the country. But you don’t know that. They have spikes.”

Trump: “Take a look, it’s cases. And we have cases because of the testing.”

Swan: “I mean, a thousand Americans are dying a day. But I understand, on cases, it’s different.”

Trump: “No but you’re not reporting it correctly, Jonathan.”

That, mercifully, was the end of the discussion about coronavirus. Other noteworthy moments from the interview included Mr. Trump’s assertion that he reads a lot and “comprehends extraordinarily well”; his assertion that mail-in voting, which has been around since the Civil War in the 1800s, is a “new phenomenon”, his belief that he’s done more for African-Americans than former president Lyndon Johnson, who passed the Civil Rights Act; and his answer that he “doesn’t know” how history will remember the recently deceased Civil Rights icon John Lewis, because Mr. Trump never met him and, I quote, “he didn’t come to my inauguration”. The greatest highlight of all, however, may have been Swan’s ability to hold it together.  News.com.au