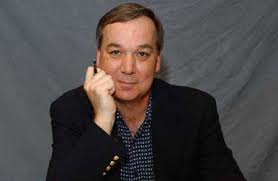 The present isn’t what it used to be
even a few years ago. For one thing,
I need someone younger to play with me,
someone who sprints into each day
as if there were a trophy at the end of it,
who hasn’t yet given up on the outside chance
that an old coat in the closet
will have money in one of its pockets.

Silly kid, down on his knees in love,
believing in that, too —
I almost remember how it felt,
the true, sweet ache of it,
like the scent of gardenia,
like the worn out river
stippled and redeemed by headlights
of the lovers’ cars.

Impossible to unknow my way
back to his ignorance,
to a past he long ago abandoned
to be here now, changed by the trip,
inhabiting this altered present
but doing his best to find
a forgotten coin, something
to make the moment shine.

Because three left turns make a right,
and the way down is the way up,
the way in the way out,
but most of all because
the beginning is the end,
where we are going looks
remarkably like where we’ve been,
ourselves growing small
headed out for the horizon,
looming large coming back,
smug with solutions
for such easy puzzles,
devising a machine to settle everything,
immense in our littleness,
tinkering with the world.

His poems have been published in various periodicals such as Poetry, The New Yorker, Virginia Quarterly Review, American Scholar, Antioch Review, Georgia Review, Michigan Quarterly Review, Sewanee Review, Shenandoah, Hudson Review, and many others. Bowers is also the author of Theodore Roethke: The Journey from I to Otherwise, 1982, James Dickey: The Poet as Pitchman, 1985; a memoir Words for the Taking: The Hunt for a Plagiarist 1997, 2007; a novel Loose Ends, 2001; and Cats Rule: The Bookstore Cat’s Guide to the Care and Training of Humans, 2009. Among his recognitions and awards are a National Endowment for the Arts Fellowship for poetry as well as the Frederick Bock Prize from Poetry magazine.