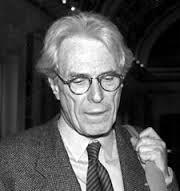 What of the neighborhood homes awash
In a silver light, of children hunched in the bushes,
Watching the grown-ups for signs of surrender,
Signs that the irregular pleasures of moving
From day to day, of being adrift on the swell of duty,
Have run their course? Oh parents, confess
To your little ones the night is a long way off
And your taste for the mundane grows; tell them
Your worship of household chores has barely begun;
Describe the beauty of shovels and rakes, brooms and mops;
Say there will always be cooking and cleaning to do,
That one thing leads to another, which leads to another;
Explain that you live between two great darks, the first
With an ending, the second without one, that the luckiest
Thing is having been born, that you live in a blur
Of hours and days, months and years, and believe
It has meaning, despite the occasional fear
You are slipping away with nothing completed, nothing
To prove you existed. Tell the children to come inside,
That your search goes on for something you lost—a name,
A family album that fell from its own small matter
Into another, a piece of the dark that might have been yours,
You don't really know. Say that each of you tries
To keep busy, learning to lean down close and hear
The careless breathing of earth and feel its available
Languor come over you, wave after wave, sending
Small tremors of love through your brief,
Undeniable selves, into your days, and beyond.

Tell yourself
as it gets cold and gray falls from the air
that you will go on
walking, hearing
the same tune no matter where
you find yourself --
inside the dome of dark
or under the cracking white
of the moon's gaze in a valley of snow.
Tonight as it gets cold
tell yourself
what you know which is nothing
but the tune your bones play
as you keep going. And you will be able
for once to lie down under the small fire
of winter stars.
And if it happens that you cannot
go on or turn back and you find yourself
where you will be at the end,
tell yourself
in that final flowing of cold through your limbs
that you love what you are.

His poems have been published in various periodicals such as Poetry, Agni Review, Boulevard, London Review of Books, Partisan Review, The New Yorker, Indiana Review, Paris Review, Oxford Quarterly, American Poetry Review, and many others.  Among his many awards and honors include the Pulitzer Prize for Poetry in 1999 for “Blizzard of One.” Strand was the US Poet Laureate in 1990-91. He was also an editor, translator, prose writer, children’s book author, and art critic.