Something Bezos should consider doing instead of space travel: Swedish Johan Eliasch on why he’s saving the Amazon rainforest 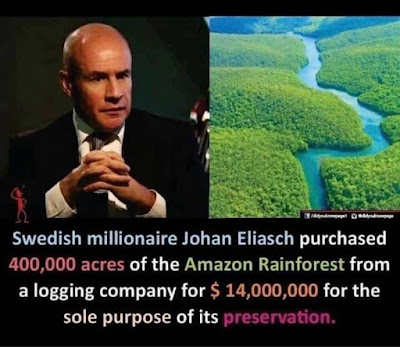 “Johan Eliasch, chairman and CEO of sporting-goods group Head, founded Cool Earth to work with local communities to protect forests around the world. Here he explains why:

“‘There aren’t many areas of human endeavour where no progress has been made in the past 40 years... One area with only patchy signs of advancement is how we treat the environment. Perhaps the greatest shortcoming is not achieving that well-worn slogan of the 1970s green movement: ‘Save the Rainforest.’

“‘The scale of this shortcoming isn’t just in the appalling loss of forest (half has been destroyed since the first Earth Day in 1970). It is also in the fact that the value of tropical forest is so well understood that it has become a truism. Whether it be as a vault of biodiversity, a fresh water generator, an oxygen manufacturer or a global thermostat, the role of rainforest is the cornerstone of third grade syllabi and nature documentaries. If there was ever a motherhood and apple pie cause, it is saving the rainforest.

“‘The recent response of policymakers to this continued problem has been to place value on living rainforest. This has generally been done by imposing penalties on their destruction and through the creation of reserves and forest codes that limit extraction. Yet they still shrink.

“‘This state of affairs has encouraged a rethink, with even the effectiveness of reserves coming into question. My opinion is that reserves and federal laws are not capable of saving the forest. I’ve sought to prove that there are better alternatives. 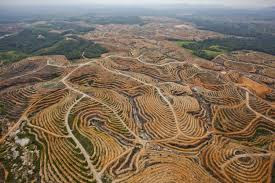 “‘My first effort was a unilateral one when I bought a logging concession in Brazil and closed it down. The reasoning was simple: it was about to clear one of the most beautiful tracts of forest in the Amazon, and there would be no appreciable benefit for local people. So instead of watching migrant workers clear thousands of acres of trees, local communities got full access again to the forest to use as their food store and medicine chest. All that was asked in return was that they keep it standing. On a small scale, it could quickly be seen that people who depend on the forest are its best custodians.

“‘With the help of Frank Field, the smart and unconventional British politician, in 2007 I launched the NGO Cool Earth. The UK-US charity refined the model by working with indigenous communities in Peru, Ecuador, and the DR Congo to put local people back in control of the forest.

“‘By offering an alternative to offers of quick cash from loggers, Cool Earth makes sure communities with most to lose from deforestation actually gain the most from its protection. In six years, Cool Earth has built schools, clinics, fish farms and co-operatives that boost life chances and livelihoods.

“‘From an initial target of saving 4,500 acres of rainforest, Cool Earth and its community partners now protect over 500,000 acres. Even more important, we ask every community to ask their neighbours to work with them. As a result, the acres we protect form long shields that make even more forest inaccessible to loggers.

“‘For an issue as intractable as tropical deforestation, there are no quick answers. Helping communities on the ground protect the forest upon which they depend is a good place to start.’”