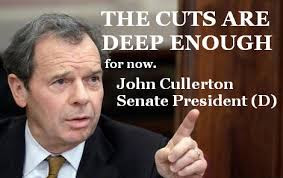 Eliminates the General Assembly Retirement System for future lawmakers. Upon being signed into law, new lawmakers taking office on or after that date would have no pension.

Public Pension Reform:
Savings would be recognized by giving Tier 1 public sector employees a choice of benefits related to raises they may receive in their careers and the annual cost of living adjustments to their pensions in retirement.
Estimated savings: Potentially $700 million to $1 billion annually.
Who’s covered?
Tier 1 employees covered by SURS (university employees), TRS (public school teachers), GARS (General Assembly members) and CTPF (Chicago teachers).
Who’s not covered?
All retirees.
SERS (state employees). State employees are excluded because of ongoing legal action
regarding the lack of a contract at this time.
Judges.
How it works:
Tier 1 employees (those employed prior to Jan. 1, 2011) are asked to give up the 3 percent compounding COLA increase they would be eligible to receive each year in retirement.
It would be replaced with the COLA plan for Tier 2 employees (those employed after Jan. 1, 2011). The Tier 2 COLA rate is 3 percent non-compounding or half the rate of inflation, whichever is lower.
They would also be asked to delay Tier 2 COLA increases until either 5 years into retirement or at age 67, whichever comes first.
Those who agree to the lower, delayed cost of living retirement adjustments this would get three things in return:
1.  A constitutional guarantee that future raises would count toward their pensions.
2.  A lump sum refund worth 10 percent of their contributions to the pension systems so far.
3.  A 10 percent reduction in what they pay toward their pensions going forward.


For those who do not agree to accept the COLA change, the 3 percent compounded COLA remains unchanged in retirement. However, future pay raises will not count as pensionable income. Those employees’ pensions would be based on what they make now.
For example, if a Tier 1 employee makes $50,000 today and rejects the deal, but later receives a $5,000 salary increase, then the employee’s salary for calculating pensions when he later plans for retirement is frozen at $50,000, not $55,000.
Other provisions:
·      Voluntary 401K-style retirement option: Instead of paying toward a pension plan, Tier 1 employees would have a choice of investment options. Employees who go this route would have their pension benefits frozen where they are now and would utilize this new retirement plan going forward. Would be open to a maximum of 5 percent of active Tier 1 employees.
·      Pension Spiking: Change the current 6 percent limit on end of career pay to a cap based on the rate of inflation.
•        High Salary Cost Shift: Any employee whose salary is higher than the salary set for the governor ($177,412) the employer (school district, university) shall pay the state’s pension contribution for the portion that exceeds the governor’s pay.