Spotlight on Bruce Rauner from the National Public Pension Coalition 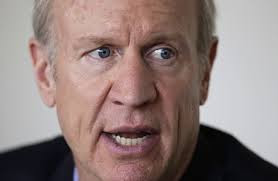 “In [these] posts, we continue to shine a spotlight on right-wing politicians and anti-worker ideologues who are leading the charge to gut public pensions. Today’s subject is Illinois governor Bruce Rauner.

“While relatively new to the office and without the shameful track record of New Jersey governor Chris Christie, Rauner is a rabidly anti-labor politician, who is threatening the retirement security of Illinois teachers, firefighters, nurses, and police officers.

“Some people say Illinois has a pension problem, but in reality Illinois has a politician problem. For decades, politicians in Springfield have made irresponsible decisions that have led to a massive underfunding of Illinois public pensions. The state legislature passed a law in 2013 attempting to curtail pension benefits in order to address this underfunding, but it was struck down as unconstitutional by the Illinois Supreme Court this year.

“Since taking office at the beginning of this year, Governor Rauner has proposed a number of anti-worker measures, including creating so-called ‘right-to-work zones’, abolishing fair share fees for public sector unions, and eliminating collective bargaining for public workers.

“On public pensions, Governor Rauner has been no better. He has suggested amending the Illinois constitution to remove the protection for pensions. He has also proposed a plan that would cut benefits for firefighters, police officers, teachers, and other public workers.

“Fortunately, this radical restructuring of pension plans would be unlikely to survive a court challenge. The people of Illinois need politicians who will responsibly address the state's budget and fiscal problems, not needlessly attack the people who make our communities work” (National Public Pension Coalition).