Take Note Illinois Unions: This Is How One Union Fights Back Against Attacks on Teachers (by Dan Clawson) 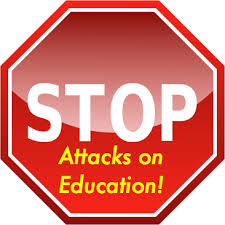 “Under its newly elected leadership, the Massachusetts Teachers Association has become a democratic, rank and file-led organization —one that is starting to rack up victories”

“To the casual observer, Massachusetts may seem like an unlikely place to open up a new front in the assault on teachers. The state has the highest test scores in the nation, and just this year the National Education Association named its chief executive ‘America’s Greatest Education Governor.’

“But on October 20, the Massachusetts Department of Elementary and Secondary Education (DESE) unveiled a draconian proposal that would tie teacher performance, narrowly defined, to teacher licensing. Thousands of educators knew an unmitigated attack when they saw one, and responded accordingly.

“Late last week, after a massive backlash organized by the Massachusetts Teachers Association — under the leadership of Barbara Madeloni, the recently elected president of the 113,000 member union — the proposal was withdrawn. The victory should serve as a reminder that a mobilized rank-and-file and implacable leadership can defeat attacks on public school educators. Backroom deals don’t get the goods. And because the proposal will likely appear in other states, teachers around the country should take note.

“Under the October 20 proposal, teachers rated by their supervisors as ‘needs improvement’ wouldn’t just lose their jobs — they’d lose their license, preventing them from teaching anywhere in the state ever again.

“On October 30, in response to letters of protest, Massachusetts Commissioner of Education Mitchell Chester emphasized that ‘at this point in time,’ he had not yet recommended any specific changes. He was just floating a set of (bad) options. Three were being considered, and all tied license renewal to ‘performance.’

“Under Plan A, a teacher wishing to retain her license would have to be rated at least ‘proficient’ and have at least ‘moderate’ student impact ratings every year; a teacher who cleared that bar could get her license renewed for the next five years. On the other hand, if her supervisor judged that she ‘needs improvement,’ or her students’ test scores didn’t go up at least a ‘moderate’ amount, she would be unable to re-up her license.

“Under Plan B, if an educator didn’t ‘demonstrate to the state’ enough ‘progress toward growth’ on his or her educator plan, the educator would get a conditional one-year extension. This would presumably require the state to add hundreds of staff members to read through eighty thousand teachers’ educator plans. (This in a state where the DESE often takes a year to respond to a complaint that a teacher violated the rules for administering a high-stakes test — one of the agency’s highest priorities.)

“Plan C offered a menu of bad choices, and applicants had to meet two or more of them. Options included being recommended by one’s school district (dependent on one’s supervisor), ‘satisfactory student growth as measured by’ high-stakes standardized tests, and (unspecified) ‘successful and effective parent engagement.

“These inane plans – not raising pay, or according respect, or giving teachers more autonomy in the classroom – were supposed to create a world-class teaching force in Massachusetts.

“If adopted, the consequences of this ‘performance-based’ licensure system would have indeed been dire. First, teacher tenure would be effectively abolished. Forget due process. An educator could have a solid union contract and be doing a pretty good job; if his supervisor decided he wasn’t good enough, he’d lose his license and his job — even if he had Professional Teacher Status, the state’s equivalent of tenure.

“Second, teachers’ jobs would be dependent on their supervisors’ goodwill. If they got a ‘needs improvement’ rating, then in order to avoid another such evaluation, for the next four years (until the next license renewal), they would be under great pressure to support every initiative their supervisor proposed, no matter how ill-conceived.

“In other professions, people can lose their licenses for a variety of kinds of bad behavior, but nowhere else is one prohibited from working again on the basis of a bad supervisor report. Anyone who has ever had a bad boss knows how dangerous such a provision would be.

“Third, teachers would flee low-income school districts. In Massachusetts, there is an almost perfect correlation between a town’s median household income and the percent of students who receive a passing score on the state’s high-stakes standardized test. If the students have low scores, and if we have a ‘no excuses’ policy that implicitly or explicitly says teachers are entirely responsible for student test scores, then clearly the teachers ‘need improvement.’

“Therefore, most of the teachers in low-income schools would either leave teaching altogether, or they would transfer to more affluent communities (where, miraculously, their students’ test scores would go up and the teacher would suddenly be a good teacher). Not surprisingly, there are huge variations across the state in how principals and superintendents rate teachers. In Fall River, a low-income community, 31.3 percent of teachers were rated “needs improvement”; in Newton, an affluent community, only 1.3 percent of teachers were similarly judged.

“These policies would therefore have busted unions, put teachers under their supervisors’ thumbs, and driven people out of teaching, especially in low-income communities. At that point charters would emerge as the obvious option. These wouldn’t be the unfortunate by-product of the new licensure proposal; they would’ve been the inevitable result.

“But the proposal was quashed before we had to see that outcome. How was it stopped? An enlivened union membership was crucial to nixing the proposal, but so too was a newly installed, fighting leadership.

“In 2012, when the Massachusetts Teachers Association was under different leadership, the education reform group Stand for Children threatened a ballot referendum to take away teachers’ seniority rights. The union did not inform the membership, much less mobilize it. It never tried attempted to build the rank-and-file’s collective capacity to resist.

“Instead the president and vice-president engaged in secret backroom negotiations with Stand for Children. When the board of directors first learned about this — thanks to persistent questioning by a handful of board members — the president insisted that the entire discussion take place in executive session; board members were forbidden to tell the rank-and-file what was going on.

“Eventually a deal was negotiated, removing some of the worst features of the ballot measure, but with the union agreeing to dramatically weaken the impact of seniority in layoffs and transfers, which were now to be governed by ‘the best interests of the child’ – a phrase that could mean practically anything. The union’s mantra, heard often under the old leadership, was ‘it could have been worse.’

“The custom in the Massachusetts Teachers Association is for the sitting vice-president to ascend to the presidency. But something strange happened in May: Madeloni, a rank-and-file progressive activist, was elected president in the most stunning election upset in the union’s history.

“When the teacher re-licensure proposal was unveiled last month, Madeloni did not initiate backroom negotiations and seek an orderly retreat; she immediately and decisively opposed the new licensure proposal, and gave an eager membership ways to act.

“More than five thousand members sent emails, and two rallies were scheduled, with buses rented and members signed up to attend the last two of DESE’s ‘Town Hall’ meetings for their proposal. Instead of choosing which bad option to support, the campaign was titled ‘None of the Above.’

“Three weeks after the MTA campaign began, the DESE completely caved. A letter from Chester announced, ‘In short, we are rescinding the draft options that link licensure to educator evaluation.’ An impressive victory for teachers and the union, although we worry that, vampire-like, some form of this will be brought forward again as soon as DESE and corporate reformers think we are napping.

“And while the proposal has been defeated in Massachusetts, similar proposals may be coming to other states. In 2012, the Council of Chief State School Officers released a report on teacher licensure that implicitly promised another focused on re-licensure.

“The report stated it was being issued ‘to all chief state school officers to sound a clarion that current policies and practices for entry into the education profession are not sufficient,’ adding that ‘While the focus of this report is on new teachers and principals, future reports will address the need for additional preparation of veteran teachers and principals.’ Clearly the states coordinate, and announced their intention to address teacher re-licensure; the Massachusetts’ proposal appears to be an opening shot in this effort.

“So what can others learn from the victory in Massachusetts? Why was the union’s victory so complete and so swift?

“First and most importantly, the union leadership made it clear that it was prepared to fight, and that it was not looking for a minor backroom concession. Second, the union jumped on the issue immediately. The proposal was released on a Monday, and by Friday the union had developed background information, had material on its website, and had sent an email to all members with steps to take to oppose the new licensure proposal. Third, the membership was weary of backroom deals and was ready for a fight. The rank-and-file responded by the thousands, and local unions were gearing up to get every member to weigh in on the issue.

“Fourth, this was an issue that unified the membership. Every teacher knew that her license, her teaching career, was in jeopardy. Fifth, the powers-that-be had never confronted a teachers union leadership and membership prepared to fight (in fact, spoiling for a fight). For the past many years, whenever teachers were threatened the union entered negotiations to plan an orderly retreat. The DESE probably expected the same ‘let’s make a deal’ response this time, and were caught by surprise by the strength of the response.

“Finally, Madeloni made it clear that the union was not going to compromise; we were going to fight until we won, and the campaign that started strong was building momentum throughout the three weeks it took to win.

“In fighting similar corporate reform measures around the country, teachers can’t assume a mobilized base and progressive leadership will always secure a comparable victory. There are structural constraints that sheer militancy can’t overcome. But it’s certainly a precondition for success.”

This article was written by Dan Clawson, a professor of sociology at the University of Massachusetts-Amherst. He is a member of the board of directors of the Massachusetts Teachers Association and co-chair of the MTA’s education policy committee. His views and opinions do not necessarily reflect those of the MTA.

From In These Times