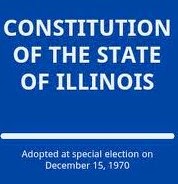 “Anyone following the pension-reform debate knows Illinois has long diverted the money needed to properly fund its pension systems to avoid tax increases, cuts in public services or both. Some may not admit it, but they know it. They also know this practice is the primary reason why the systems are under water.

“Because much of my time the past three years has been spent on the state’s pension problem, I wanted to find out how long it’s been that way and how long we have known about it. As chronicled in an article I wrote that was published by Chicago-Kent College of Law, I have an answer: 1917.

“In 1917, the Illinois Pension Laws Commission warned leaders that the retirement systems were nearing ‘insolvency’ and ‘moving toward crisis’ because of the state’s failure to properly fund the systems. It also recommended action so that the pension obligations of that generation would not be passed on to future generations.

“The warning and funding recommendation went unheeded, as did similar warnings and recommendations found in decades of public pension reports issued before and after the pension clause was added to the Illinois Constitution in 1970.

“For decades, these reports consistently warned the public and lawmakers of the dire consequences of the state’s continued under funding and of the significant burden unfunded pension liabilities posed for taxpayers. They advised that the pension clause bars the legislature from unilaterally cutting pension benefits of retirees and current employees.

“Indeed, one of the clause’s purposes is to prevent the state from reneging on its pension obligations during a fiscal crisis because of the burden imposed by unfunded liabilities. The clause was added at a time when the pension systems were no better than they are today.

“These reports also reveal that as early as 1979 Moody’s and Standard and Poor’s advised Illinois that it would lose its AAA bond rating if it did not begin tackling its increasing unfunded pension liabilities.

“Further, a 1985 task force report noted that Standard and Poor’s reduced its bond rating for Illinois from AAA to AA+ because of the state’s ‘deferral of pension obligations,’ and that another rating agency viewed Illinois’ pension funding as a future financial ‘time bomb.’

“Finally, the much-heralded 1995 pension funding plan was designed to increase the state’s unfunded liabilities and postpone its actuarially sound pension contributions until 2034.

“Given this well-documented history, it’s extremely hard to legitimately believe Illinois’ current situation is so surprising that the state constitution can be ignored and pension benefits unilaterally cut. As noted in my previous legal research, the pension clause does not support such a result.

“The likelihood of that result occurring seems even more remote given the Illinois Supreme Court’s July decision, in which it explained that the clause was intended to ‘insulate’ benefits from ‘diminishment or impairment by the General Assembly’ and that the court could not rewrite the clause ‘to include restrictions and limitations that the drafters did not express and the citizens of Illinois did not approve.’

“Make no mistake, the court’s decision strongly signals doom for the argument that the 2013 pension-reform bill is constitutional because the legislature can trump the pension clause when it declares a fiscal necessity. So, too, does the state’s sordid history of failing to properly fund its pension system.

“When it comes to Illinois’ pension-funding problem, what’s past is prologue. Addressing this problem, however, requires the acceptance of this history, as well as the obligations and boundaries imposed by the pension clause.”

This summary article by Eric M. Madiar appears to be no longer available at http://illinoissenatedemocrats.com/ However, it is still available at the State Journal-Register.

To read the complete 43-page report by Madiar, Click Here.