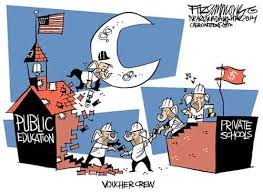 “This academic year we are sending 258,580 Illinois children into schools that will fail to bring 60 percent of them to grade-level by June. Of those who do graduate from high school in four years, fewer than 20 percent will be considered ‘college ready.’ And that's with funding to public schools in excess of $13,000 per student (not including state funding for after-school programs, construction grants, targeted initiatives or pension payments). Is that acceptable to you?

“Frighteningly, these statistics only represent students enrolled in 10 percent of the state's lowest-performing schools. But they're not outliers. The next tier of ranked schools shows similar results: Fewer than half of the students perform at grade level. By its own measurements, the Illinois State Board of Education says it should take action against nearly 100 school districts for lack of yearly progress for three or more years.

“These are not the schools to which wealthy families or even middle-class suburbanites send their kids. They are not the schools that Illinois' political leaders — including the governor, House speaker and Senate president — attended. Nor are they the private schools to which many legislators are sending their children and grandchildren. These politicians are not wrong to choose the best education possible for their loved ones. They are, however, wrong to steadfastly deny the same opportunity to other children and their parents who have no voice in the big-government, unionized system called education in Illinois.

“If we have great teachers in every classroom and funding to the tune of $13,000 per student per year, then how do we account for the ISBE statistic that less than half of Chicago Public Schools students meet state standards and only 26 percent are college-ready? Or, that the National Assessment of Educational Progress reports that nearly two-thirds of Illinois fourth-graders do not perform at grade level in math or reading?

“Explain how 91 percent of students fail to meet state standards in Illinois' lowest-performing school, Mark Twain Primary in Kankakee? In the Aurora East school district, nearly 70 percent of fourth-graders are not reading at grade level. In Rockford, more than 60 percent of eighth-graders started school with math and reading skills below state standards.

“The problem is systemic. In Illinois, we have a system in which politicians and bureaucrats have too much control in the classroom, parents have too little, and students get lost in the shuffle. The truth is, when parents have options beyond an underperforming neighborhood school or can move children from an average school to a great one, improved outcomes follow. Choice leads to competition. Competition exposes inferiority and inefficiency while spurring innovation.

“In the Midwest and across the nation, school-choice reforms are working. Indiana students who receive school vouchers have shown statistically significant gains in test scores, and the program has saved taxpayers $41 million. Students participating in Wisconsin's voucher program graduate from high school and enroll and remain in four-year colleges at a higher rate than a carefully matched set of students in Milwaukee Public Schools. The voucher program saved the public more than $52 million in fiscal year 2011, making school choice not only right for families but for the state as a whole.

“In a We Ask America poll, commissioned by the Illinois Policy Institute and taken this year, in six low-performing school districts, on average more than 71 percent of parents who gave their schools a C, D or F rating said they would use vouchers to send their child to a school of their choosing if they could. Even when parents gave their schools an A or B, they still wanted the ability to choose their child's school.

“That's really what this debate is about. It's about putting parents and children ahead of government bureaucrats. It's about ensuring that all children have an opportunity to grow and learn — not just those whose parents can afford to leave failing schools. And, it's about empowering parents to pick the school and method of learning that can best meet their child's needs.”

Give Illinois students a choice by Jeanne Ives, Tom Morrison and Joe Sosnowski is from the Chicago Tribune, September 15, 2014

What do we know about vouchers and charter schools that Ives, Morrison and Sosnowski did not tell you?

·         This money will be in the bank accounts of private investors

·         Voucher proponents “represent the most reactionary elements of our society”

·         Vouchers are not about “saving children” or “improving education.” It is about destroying public education and making profits

·         Vouchers do not increase “Parental choice and control over tax dollars”

·         Voucher advocates are often referred to as “nonpartisan”

·         Private schools have no accountability, especially for children with disabilities

·         There are no “reliable data” that prove vouchers and charter schools perform better than public schools; there is evidence to the contrary, however

·         We Ask America poll, commissioned by the Illinois Policy Institute (an organization deeply invested in charter school chains), is questionable

·         There is no separation of church and state in private schools

·         Vouchers have been “declared unconstitutional” in North Carolina and Indiana; other legal debates continue

·         “The Milwaukee voucher schools have never outperformed the public schools on state tests: Read here and here. The only dispute about test scores is whether voucher students are doing the same or worse than their peers in public schools. Read here about some very low-performing schools in Milwaukee that have never been held accountable”
·         “Steve Hinnefeld analyzed Indiana’s growth scores and found that public schools usually showed greater gains than charters or religious schools”

·         “Public school students perform as well as or better than comparable children in private schools” (U.S. Department of Education) Diane Ravitch, Death and Life of the Great American School System)

·         Some charter schools (of choice) have been under “federal criminal investigation for nepotism, conflicts of interest, and financial mismanagement” (Ravitch)

·         “Enthusiasm for charter schools far outstripped research evidence for their efficacy… Too many promises that are only, at best, weakly supported by evidence” (Ravitch)

·         “The rhetoric of many charter school advocates has come to sound uncannily similar to the rhetoric of voucher proponents and of the most rabid haters of public schooling. They often sound as though they want public schools to fail; they want to convert entire districts to charter schools, each with its own curriculum and methods, each with its own private management, all competing for students and public dollars” (Ravitch)


·      “The charter movement is now part of the growing privatization of public education and Wall Street sees an emerging market.   Take a look at this piece published last fall on Forbes.com. ‘…dozens of bankers, hedge fund types and private equity investors…’ gathered to discuss ‘…investing in for-profit education companies…’ There’s a potential gold rush here. Public education from kindergarten through high school pulls in more than $500 billion in taxpayer revenues every year, and crony capitalists and politicians alike are cashing in…” (Bill Moyers).