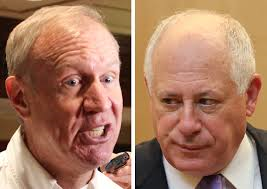 “Pension reform is one of the biggest issues facing the state. Gov. Pat Quinn has passed pension reform legislation, which could be ruled unconstitutional by the Illinois Supreme Court. If that were to happen, Quinn has yet to detail what he would do. As for GOP challenger Bruce Rauner, he proposes shifting workers to a 401k-style, defined contribution system while maintaining all benefits accrued to date. Rauner hasn’t detailed how his pension reform plan would be paid for. Ralph Martire, executive director at the Center for Tax and Budget Accountability, Dan Montgomery, president of the Illinois Federation of Teachers, Bruce Dold of the Chicago Tribune's editorial board, and John Tillman, CEO of the Illinois Policy Institute, discuss the their pension reform proposals and what voters need to know in order to make an informed decision about where each candidate stands on the issue.”

“There were Ralph Martire, Dan Montgomery, Bruce Dold and John Tillman to talk about pension reform and the Illinois Governor’s race on WTTW’s Chicago Tonight. Host Carol Marin laughingly called them the Alumni Club because they have been on the show so often to discuss the issue.

“It was Marin who pointed out that the issue has been absent from serious discussion by either candidate during the course of their campaigns. Democrat Pat Quinn has not said what he will do when the Illinois Supreme Court rules, as expected, that Senate Bill 1 violates the pension protection clause of the Illinois Constitution. Republican Bruce Rauner will not discuss the details of his proposal to turn current public employee pensions into a 401K defined contribution plan.

“Even Marin was in no mood to listen to the right-wing Illinois Policy Institutes’ John Tillman lecture us with his free market philosophizing once again. She cut him off the moment he started. She might rethink why she keeps inviting this phony to the program. In fact, the only one who addressed the issue was Martire, who once more seemed to be the patient school teacher who reminded the viewers and voters that Illinois has no pension benefit problem. It has a tax and revenue problem.

“Pension benefits are not the problem. Neither candidate has a solution since neither candidate addresses how to raise revenue. This should have been the point that Illinois Federation of Teachers President Dan Montgomery made. But Montgomery didn’t and he won’t since his organization takes a position of uncritical support of Governor Quinn.

“Voters are left with making a choice between two candidates who will not speak to the issue of pensions. The irony is that the issue may decide the election. A few thousand still-angry state employees may well be the margin of victory. An Illinois governor’s election with no discussion of pensions. Disgusting.

“I couldn’t help but notice that at the end of the segment, while the alumni club members were still chatting away, Marin walked away. It was as if she had had enough. I resonated.”