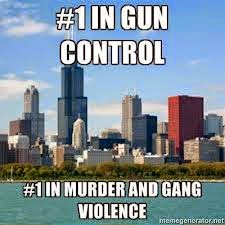 I have often heard these statements about gun control and the Illinois Conceal Carry Law: “We don’t need any more guns in the world. Banning guns will save lives. There is no constitutional right for an ‘individual’ to bear arms. If you have a loaded gun, you’ll be tempted to use it. Guns in the home increase the likelihood of killing a family member. We won't be able to tell the difference between the bad guy and the good guy holding the gun. Concealed Carry will create a Wild West shootout on our streets. Conceal Carry gives a person a false sense of security. Law enforcement agencies do not support the Conceal Carry Law…”

It is a good thing that being confronted by an armed intruder is an atypical scenario for most people. Nevertheless, is it fair to deny well-trained law-abiding citizens a secure self-defense alternative before the police can arrive? Please explain in the “Comment” section.

It is believed that gun control laws do not work in a world where millions of weapons already exist and where hundreds of thousands of violent perpetrators illegally own them. (Like you, I wish there were no guns in the world, but that is not our reality). Moreover, it is believed by many people that the right to bear arms is a pre-emption for crime, and that gun control laws do not reduce crimes. Instead, they deprive law-abiding citizens of a means for contingent crucial protection until the police arrive too late.

What will help reduce violent behavior is “focusing action on crime and anti-social behavior hotspots, repeat victims, and prolific or high volume offenders is… [Furthermore], understanding what is causing high volume offending or problems in hotspots, and coming up with specific solutions – often in partnership with others – allows the police to drive down crime” (What is the best thing the police can do to reduce crime?).

Do you agree or disagree that law-abiding citizens who are properly trained in the use of firearms can help deter a potential crime in their homes and perhaps in their communities, and that general public safety might in fact improve with a well-trained armed citizenry?

“[Do you remember when] Steven Phillip Kazmierczak, 27, a U of I graduate student and former Northern Illinois University student, shot and killed five NIU students and injured 21 others during what has been called the darkest day in NIU history [on February 14, 2008]?  Kazmierczak shot and killed himself on the lecture hall stage… [When] the carnage was over…, Kazmierczak was dead before police charged into the auditorium. [NIU Professor Emeritus Jack Bennett] wonder[ed] how that day might have been different if a handful of students had been armed and trained to shoot back.

‘“[According to Bennett], one or two of the 200-plus students with a weapon and the required skill could have easily reduced or stopped the damage. [No Gun] signs on the doors give the criminal or the mentally-ill person who wishes to kill a guarantee that no one will have a weapon to stop their inhuman activity. That notice is a license to kill’” (Concealed Carry: Not at Illinois Colleges and Universities).

Consider that legislators who make and pass restrictive gun possession laws for nonviolent rational citizens and for public places commonly have their own personal armed security with them on a daily basis; that a law asserting a “Gun-Free Zone,” for instance, is also an invitation for felons to commit crimes. Do you agree or disagree? Please explain.

Consider those people who believe the Conceal Carry Law will create more violence; that ordinary citizens will become “trigger happy” because they’re concealing and carrying a weapon. Do you agree or disagree? Please explain.

Finally, do you believe Illinois legislators should spend more time investigating and solving the causes of violent crimes in their communities instead of curtailing the rights of trustworthy citizens, and that they should be examining what needs to be done about keeping guns out of the hands of mentally-ill lawbreakers rather than impeding the rights of upstanding citizens because criminals do not obey laws? Do you believe well-trained, law-abiding citizens (who might conceal and carry a weapon) will obey the laws? Please explain.

If you are interested in what I believe about gun control rights, pull the trigger here for a related post.