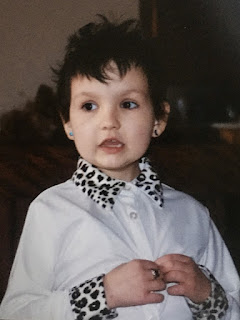 Arms, take your last embrace; and lips, O you,

The doors of breath, seal with a righteous kiss

A dateless bargain to engrossing Death.”

7,305 days. Like breaths in and out, we don’t usually count them, but that’s the number of days my darling Katherine has missed of her life so far.

For a while, I could have told you what she would have done with them, the Madeline set in a shop window she would have picked out on our trip to England the summer she died, the Halloween costumes she would have chosen, the books she might have read, the professions she might have pursued – she had a wonderful talent for enjoyment and learning and love. Her friends are having babies now.

Now, I am left with only guesses, and none of those days did she have, nor will she ever have them. Now, the days she had – 3,052 – are dwarfed by the life she lost. This is the worst thing about losing a child – not losing your pleasure in them, nor the happy person you yourself might have been if they had lived – but them losing themselves. And in Katherine’s case, she knew: she was smart enough and lingered long enough to fully understand what she was losing.

“Mommy,” she said, “if I die, all my pretend friends will die with me.” She was right – and she lost more than even she knew. And what a rich imaginative life she had. What she would have accomplished we will never know. “Mommy,” she said, “don’t I even get to live as long as the average man?!” knowing the statistics as she did that women usually get a few more years. She wanted to live to be an old lady, and she would have been a brilliant, accomplished one.

Enough of laments. This is my burden, not yours: though it could be yours – don’t forget. But what is the responsibility of every single one of us is to build a country where children are not routinely poisoned, routinely cursed to live short or limited lives because of our lack of control over deadly chemicals, broadly cast over us all by the evil companies that profit from them, and the misguided people who prioritize their right to a pretty lawn and cheap produce and mosquito-free barbecues over children’s rights to live out their days.

It is also the responsibility of every single one of us to build a country where children do not live foreshortened lives because of our lack of control over deadly weapons, designed only to kill, broadly cast over us all by the evil companies that profit from them, and the misguided people who prioritize their right to shoot things over children’s rights to live out their days. What is this nation coming to? As Elizabeth Brunig argues, a culture that kills its children has no future.

Commonsense gun laws, like commonsense laws protecting children from pesticides should be easy, low-hanging fruit compared to all the difficult problems: war, famine, climate change. Here's how you could take steps towards both. It is important to play the odds – buckle up, stop smoking, stop systematically poisoning everyone, mitigate climate change, and implement limitations on environmental chemicals AND guns, just as we have for drinking, smoking, and other adult activities. Consider all the days – beautiful ones and challenging ones – that will otherwise be lost.