We Need Executive Branch and Congressional Reforms after Trump Exits 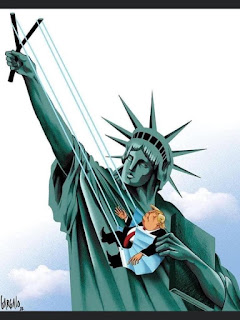 “Now that Donald Trump’s time in the White House is ending, an urgent task is the reform of the presidency that for four years he sought to shape in his image and to run in his personal and political self-interest. What those years have shown is that the array of laws and norms that arose after Watergate and Vietnam requires an overhaul.

“Any program for reform of the presidency must give precedence to our health and economic crises. It must also acknowledge political realities. Some reforms can be carried out by the executive branch, but others require legislation. Those must attract at least modest bipartisan support in the Senate. With these constraints in mind, an agenda for reform of the presidency could realistically reflect the following priorities:

“These reforms should focus on restoring the integrity of the rule of law, especially to check presidential interventions in law enforcement for self-protection or to harm political enemies. The Constitution vests executive law enforcement power in the president, so the executive branch must institute most of these reforms. Internal branch reforms lack legal enforceability but can establish or reinforce guardrails that constrain even norm-breaking presidencies, especially by influencing presidential subordinates.

“Because President Trump defied them regularly, and sometimes his Justice Department did, too, there’s a lot of skepticism about norms. But actually, norms succeeded more in checking him than has been appreciated — for example, in ensuring that Robert Mueller, despite Mr. Trump’s opposition, could complete his inquiry; in protecting federal prosecutors in New York in any investigation of matters related to Mr. Trump; and in preventing the Justice Department from carrying out the president’s desire to prosecute his enemies.

“Reforms should include sharpening Justice Department regulations against political bias in law enforcement; extending to the attorney general the department norms against interfering in investigations; clarifying the rules for investigations of presidents and presidential campaigns to protect against the political impact of investigative steps or announcements, like actions taken close to an election; and changing the regulations so that a special counsel possesses enhanced independence from the attorney general and can report to Congress and American people the facts of any credible allegations of criminal conduct against a president or senior executive branch official.

“Congress should by statute supplement the executive reforms. Three should have broad public support and should be easier for Republican legislators to vote for once Mr. Trump is out of office.

“First, Congress should transform into law the anti-corruption norms of presidential behavior that have long been accepted by both parties but were flouted by Mr. Trump. That would include requiring presidents and presidential candidates to make a timely disclosure of their tax returns. It should also bar the president, under threat of criminal penalty, from any role in the oversight of any business; ban presidential blind trusts, which in this context are inconsistent with core concepts of transparency and accountability; and establish procedures for Congress to police the ‘emoluments’ the president would receive from foreign states.

“Second, Congress should expressly bar presidents from obstructing justice for self-protection, protection of family members and to interfere in elections. It should also make it a crime for a president to offer a pardon in exchange for bribes, including clemency granted for silence or corrupt action in a legal proceeding.

“Third, Congress must upgrade legal protections against foreign electoral interference, a concern for both the American people and the U.S. intelligence community. Congress should require campaigns to report to the F.B.I. any contacts from foreign states offering campaign support or assistance. And to clarify that foreign governments cannot offer, and presidential campaigns cannot solicit or receive, anything of value to a campaign, like opposition research, it must criminalize any mutual aid agreements between presidential campaigns and foreign governments.

“These tactics exploited loopholes in federal vacancies law. Compounding this problem is that the number of Senate-confirmed executive branch positions has grown (it is now around 1,200), and the Senate in recent decades has become more aggressive in using holds and filibusters to block or delay confirmation. Congress should significantly reduce the number of executive positions requiring confirmation in exchange for substantially narrowed presidential discretion to make temporary appointments.

“The strength of a presidency is measured by its capacity for effective executive leadership. Mr. Trump’s record of feckless leadership was closely related to his unrelenting efforts to defy or destroy constraining institutions. The reforms proposed here would enhance the institutional constraints that legitimate the president’s vast powers.

“They would thus serve the twin aims of ensuring that the ‘energy in the executive’ that Alexander Hamilton defined as ‘a leading character in the definition of good government’ is nonetheless embedded, as the historian Arthur Schlesinger Jr. rightly insisted, in a ‘system of accountability that checks the abuse of executive power’” (“How to Reform the Presidency after the Wreckage of Trump,” New York Times).

Bob Bauer, a senior adviser for the Biden campaign and a professor of practice and distinguished scholar in residence at New York University School of Law, and Jack Goldsmith (@jacklgoldsmith), a law professor at Harvard, a senior fellow at the Hoover Institution and a former assistant attorney general in the George W. Bush administration, are the authors of “After Trump: Reconstructing the Presidency.”