Though unlike Macbeth, who leaves us with pity and sympathy, trump educes only revulsion 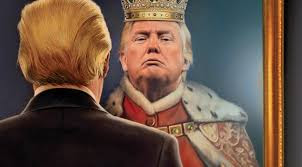 “I am sick of heart…
This push
Will…dethrone me now…
My way of life,
Is fall’n into the sere, the yellow leaf,
And that which should accompany old age,
As honor, love, obedience, troops of friends,
I must not look to have, but in their stead
Curses, not loud but deep, mouth-honor, breath
Which the poor heart would fain deny and dare not.”
(Act 5. Sc. 3, 19-28)
“Tomorrow and tomorrow and tomorrow
Creeps in this petty pace from day to day
To the last syllable of recorded time,
And all our yesterdays have lighted fools
The way of dusty death. Out, out, brief candle!
Life’s but a walking shadow, a poor player
That struts and frets his hour upon the stage
And then is heard no more. It is a tale
Told by an idiot, full of sound and fury.
Signifying nothing.”
(Act. 5. sc. 5, 20-29)
And so will be the insufferable and miserable life of trump: this inferior actor who strutted and puffed out his chest upon the world stage; this raving lunatic full of grandiose delusions, pathological lies and meaningless gestures; this incompetent moron and malignant narcissist; this remorseless fiend; this murderer of all that is good.

And so let us remember his obstruction of justice, bribery, abuse of power, betrayal of public trust, corruption of the office of presidency and our electoral system, and mishandling of the pandemic and thousands of resultant deaths. Let us remember his lack of values and principles, and his morally-objectionable behaviors as well.

And let us now think about our ability to make moral judgments and commitments, about how our moral sentiments prescribe, persuade, and command us to do what we believe, and feel, is right; that what is right is what complies with our moral duty and supererogation, and that because most of us in America live as social, rational and compassionate human beings, we have implicitly consented to moral and social contracts that have been devised.

Most importantly, because we understand why moral precepts are beneficial for all of us, we have the Rule of Law established in the U.S. Constitution; we have a shared set of moral and legal expectations for our conduct that makes it imperative to appeal to a public sense of morality and justice regardless of political party affiliation, and it is by virtue of our moral and constitutional obligations that we should make sure another Trump will never be elected to the highest and most respected office in America again.

May the media stop their coverage of Trump, ad infinitum!