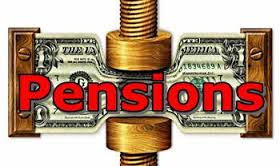 “According to one economist, smoothing is an ‘actuarial camouflage, a method to dampen on-book asset volatility.’  The practice is meant to protect the payer from the shocks of sudden changes in market returns (or volatility) in gains and losses during a single year.  So, why not spread the damages or gains over five, or ten, or twenty years to artificially reduce asset volatility?

“…According to TRS, the original state contribution for TRS expected in fiscal year 2018 – $4.65 billion – will be recalculated. TRS must retroactively ‘smooth’ the fiscal effect of any changes made in the TRS assumed rate of investment return over a period of five years.  The ‘smoothing’ applies to assumption changes from 2012 on.

“The only way it could get any more slippery or worse is if Illinois found a way to short the funding even more. They did. According to Mr. Richard Ingram, the executive director of TRS of Illinois: ‘Over the last several years state government has taken its responsibilities to TRS very seriously and has paid its legal obligation in full. Still, the legal state contribution for the last several years has been insufficient to improve the System’s long–term finances. State government’s annual contribution is set artificially by law. It is not an actuarial calculation.’

“‘The calculations set in state law artificially lower the state’s annual funding level. For instance, state law: Requires pension costs to be calculated on a 50–year timetable instead of the standard 30 years; establishes a 90 percent funding target instead of the standard 100 percent goal; requires the debt payments on state pension bonds to be deducted from the total contribution.

“‘Illinois teachers have always paid their required share and are counting on their pensions to sustain them in retirement. The state has never paid its full share. The annual contribution is the amount of money required by state law to fund TRS pensions during the coming year, as well as a payment on the System’s unfunded liability, which currently stands at $71.4 billion.’

“The inclusion of another Tier by the General Assembly as a laurel to Republicans and Rauner does not fix the hole nearly 80 years of underfunding has excavated.  It provides some relief (like SB 7 did) to borrow to pay off debts, once again on the backs of those who paid into their pensions as demanded each and every paycheck…”

from Pension Vocabulary: What Does Smoothing Mean by John Dillon